Share All sharing options for: Nike's New NFL Uniforms: Photo Of All 32 Teams

Nike unveiled the new uniforms for every NFL team at a Tuesday unveiling in New York. While most teams didn't see significant changes, there are tweaks here and there. The Seattle Seahawks had major changes to their uniforms (pictures of Seahawks new uniforms) but most of the other changes are minor. The Kansas City Chiefs and Chicago Bears, for example, moved their numbers from the sleeves to their shoulder pads (picture here). Other teams, like the Jaguars, are expected to see some changes down the road, but not in 2012. The Panthers also have a new logo, which you can see here.

The uniforms are said to be 20 percent lighter and 50 percent stronger than the previous ones. The jerseys will stay to form whether it's dry or wet. Technologically, they seem pretty advanced. Players have said it allows for more free movement. 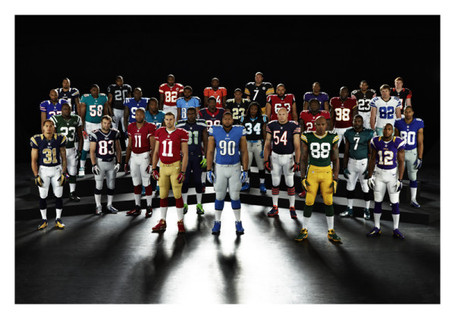 Stay tuned to this StoryStream for more on Nike's new NFL uniforms.