This week, the Seattle Seahawks' new uniform has been subject to plenty of criticism. People probably wouldn't be complaining as much if they knew about the 'Always Save' uniform, and several others that almost made it on a football field.

Share All sharing options for: The Worst Football Uniforms That Almost Happened

Nike revealed the Seattle Seahawks' brand-new uniforms Tuesday, and they have immediately proven to be polarizing. Some fans are praising the inventiveness and uniqueness of the checkered numbers and fluorescent green accents, while others complain that they look like a laser tag uniforms. That's a fair point, since they actually do feature infrared sensors that make spaceship noises when activated, but I don't think fans would be complaining so much if they truly understood how terrible a football uniform can really be.

In fact, the history of football is littered with many an instance of inconceivably terrible uniforms that almost found their way on the field. Here are six such uniforms.

Kansas is, of course, a basketball school, and the Jayhawks' football program is always on the lookout for ways to trim its budget. In 1998, coach Terry Allen was shopping at a local Price Chopper and found these uniforms selling for far less than the expensive name-brand get-ups. 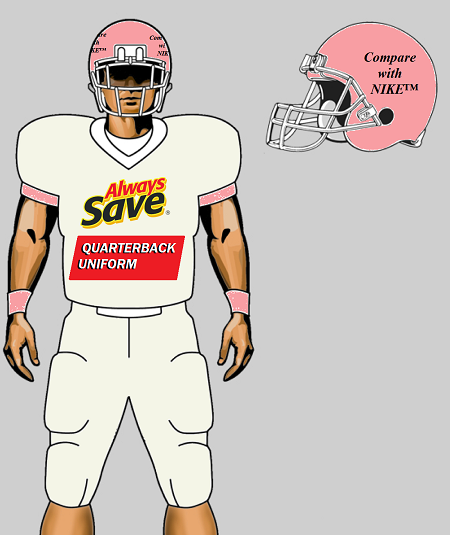 Kansas football was (and is) a very self-conscious program, so after tossing 55 uniforms in his cart, Allen idly walked laps around the store, embarrassed to go to the checkout line with a cart full of discount items, irrationally fearing that "people will think I'm a poor person." He eventually abandoned the cart in aisle four, bought several bags of Fun Size candy bars, and left. The Jayhawks did not play football that year.


SB Nation at the unveiling of the new NFL uniforms

In the mid-1980s, the Buffalo Bills were an awful franchise, and the NFL was not nearly as neurotic and obsessive about the image of its brand. As such, hoping to turn the team's fortunes around, the team decided to hold a radio contest and allow the winner to design the Bills' uniforms for the 1985 season.

The winner was a swarthy, middle-aged man from Batavia, N.Y., who had mistakenly called in to the radio station; he had actually intended to reach a Buffalo-area Burger King. Transcript:

A 10-minute on-air tirade ensued in which the man occasionally touched on the Bills' uniforms, but spent most of the time holding court on the availability of ketchup at fast-food establishments. He then abruptly hung up. The Bills were contractually obligated to honor the gentleman's wishes for a suitable football uniform, however, and a designer did as best he could to realize his vision: 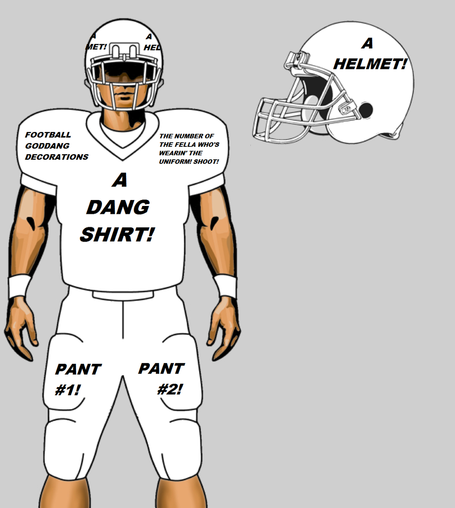 The Bills gladly paid a six-digit penalty and breached their contract. Ketchup availability in upstate New York-area Burger Kings does not seem to have improved in the decades since.

During the 1960s, the United States Army began to ramp up funding for its PsyOps department. Several means of nonviolent crowd control were developed, and after pulling some strings, the Army football program gained access to this top-secret research.

These uniforms were developed in order to incite illness in opposing football teams. 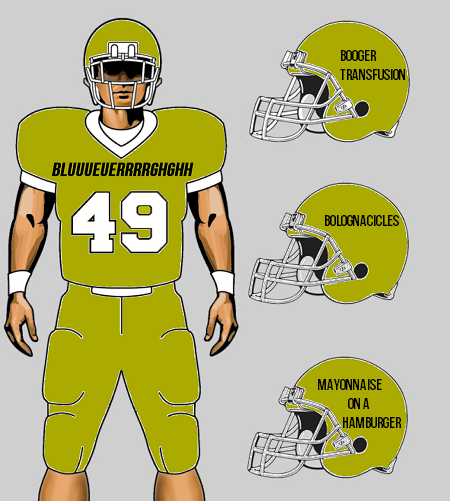 As it happened, Army was never able to actually play a game in these uniforms. Upon coming out of the tunnel, everyone in the stadium fell ill at once. The game was forfeited, and to this day the box score reads simply, "FORFEIT -- BARF-OUT."

Near the turn of the millennium, it seemed as though everyone was catching Internet Fever. Packers ownership decided that their faded colors of old were unfit for "an increasingly dot-com world," and senior executives expressed worry that if drastic changes weren't made, the Packers would soon be "roadkill on the Information Superhighway -- literally."

In response to their concerns, the Packers designed black-on-neon-green uniform that featured a link to the Packers' official website, a pair of clip-art sketches of a smiling laptop holding a globe ("to signify Internet," they said), and every instance of computer jargon they could think of collaged throughout the pants. 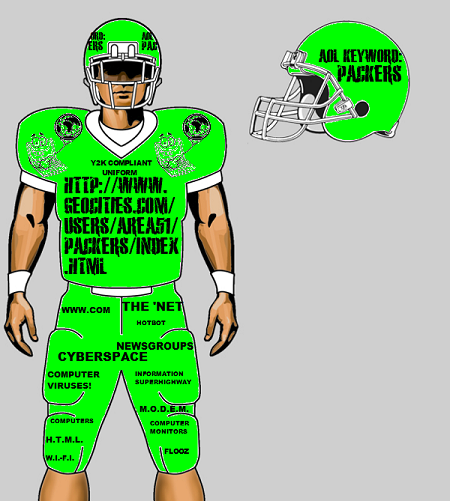 Unfortunately, these greens were never worn on a football field,. Every time the Packers called their contractor, they were told that the uniforms were "under construction."

In 2010, the Carolina Panthers turned 16 years old. And as is typical of any 16-year-old, the franchise grew enamored with the works of Charles Bukowski. 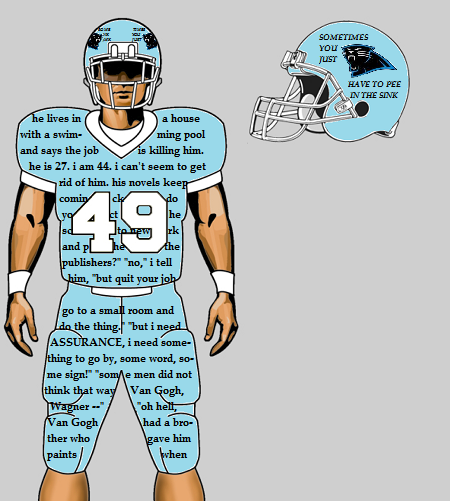 Thankfully, by the time the team actually received the uniforms, they decided that they "weren't really into Bukowski anymore." Currently, the team is slated in upcoming years to wear uniforms embracing the following themes:

2012 -- The works of Ayn Rand
2014 -- A work of militant atheism from Richard Dawkins, Christopher Hitchens, et al.
2018 -- A Malcolm Gladwell book arguing that people who are successful tend to be more successful than people who are not successful
2024-onward -- Some Tom Clancy book they picked up at the airport

Damon Huard, Kansas City Chiefs, 2008 -- Just A Picnic Tablecloth With A Bunch Of Food And Shit On It

After nearly two decades of relative prosperity, the Kansas City Chiefs fell in the late 2000s, and they fell hard. They spent three years in a quarterback platoon death-spiral, their talent grew old, and they were decimated by injuries. In 2008 they finished at 2-14, the worst record in team history.

Journeyman backup quarterback Damon Huard did what he could with a crumbling offense, but as years passed, the futile nature of the endeavor began to take its toll on him. Teammates noticed that he grew more and more ambivalent, not saying much, staring at his cleats in the locker room for 45 minutes before he finally put them on.

Prior to the Chiefs' Week 5 matchup against the Panthers, Huard was nowhere to be found. Finally, 20 minutes before kick-off, a down-trodden Huard slowly trudged out of the tunnel, hanging his head. 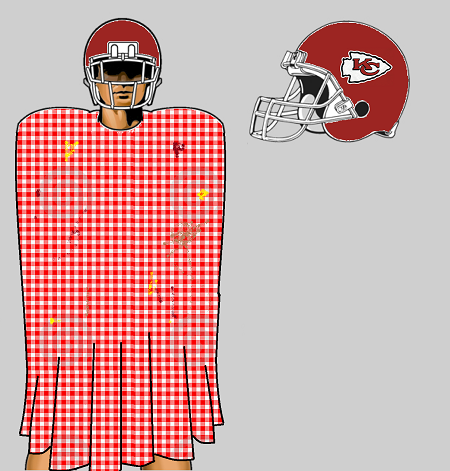 When asked what had happened, Huard began to mumble, eventually admitting that he had buried his uniform in a wheat field. Upon remembering that he still had a game to play, Huard then wandered through a park and stole a family's soiled picnic tablecloth, explaining that "it looked red enough."

Coaches scrambled to get him a new uniform before taking the field. The Chiefs lost the game, 34-0. Years later, the scoring of the game's statistics is still a subject of debate. On several different occasions, Huard took the snap, wedged the ball in his face mask, and sang "Nearer My God To Thee" until tackled. Some scorekeepers claim that, while these plays certainly ended in a sack, they couldn't in good conscience score them as "hurries."