RGIII Is As Advertised, Trent Richardson Will Keep Running Angry And More From NFLPA Rookie Premiere

SB Nation spent the weekend with over 30 of the top draft picks at the NFLPA Rookie Premiere in Los Angeles. A few players stood out to us, including Robert Griffin III, who is as advertised.

Share All sharing options for: RGIII Is As Advertised, Trent Richardson Will Keep Running Angry And More From NFLPA Rookie Premiere

The NFL Players Association hosted the Rookie Premiere last weekend in sunny Los Angeles, where more than 30 of the top draft picks in the 2012 NFL Draft gathered to make community appearances, meet sponsors from major brands and participate in a photo shoot with trading card companies.

SB Nation was on hand for the entire weekend, and it was one of the first opportunities for us to get to know some of the rookies. Those present were most of the offensive skill position players selected in the first three rounds of the draft -- quarterbacks, running backs, receivers and tight ends.

SB Nation's YouTube crew will have video of the weekend -- click here to subscribe so you don't miss that -- but here are a few of the memorable players from the weekend.

Everything they say is true. RGIII is as charismatic as they come. I was extremely impressed with him despite the fact that the bar was raised so high with all the praise he's gotten recently. I can see why everyone, especially in the Washington D.C. area, seems to be enthralled with him. He's just one of those guys who has "it," whatever "it" is.

Let's put our weekend into context. On Friday, RGIII was meeting with dozens of sponsors and doing media interviews left and right. Some players can shut down when they get that much exposure that quickly but RGIII seems to thrive in that environment. He was engaging, funny, and original when SB Nation cameras spent some time with him on Friday, and he was even better on Saturday when we caught up with him as he posed for his trading card photos at the Rose Bowl. RGIII, who was in full uniform for the first time, took our mic and interviewed a couple of players, including Bears' Alshon Jeffery (making a joke about his supposed "gut," which I think was a reference to the media reports about Jeffery's alleged weight gain before the Combine) and the Vikings' Jarius Wright. 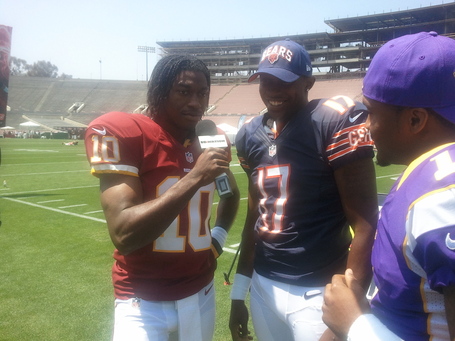 And RGIII also wore some pretty awesome cleats. Check it out, Redskins fans.

He's confident but not cocky. SB Nation asked him about the Redskins drafting Kirk Cousins, and he said that head coach Mike Shanahan -- a/k/a "Big Mike" -- told him before Day 2 of the draft that they were likely to draft another quarterback. He said confidently that he was brought in for a reason, he expects to be the starter and there is no competition with Cousins for the starting job.

Some players can say something like that and it will come off as arrogant. Not with RGIII. I felt he was confident, but I didn't walk away feeling like he was too arrogant.

Dwayne Allen has a future in broadcasting

I was thoroughly impressed with Allen, the Colts third round pick. I can already tell he's going to be a broadcaster one day, there's little doubt in my mind. He is well-spoken, polite but also very funny.

SB Nation had about 15 minutes with him on Friday, and after the interview was over he went around the room shaking the hands of our crew and thanking us for interviewing him. That doesn't happen very often.

Then on Saturday, while at the Rose Bowl, Allen found out that a member of our crew was a big Colts fan. Our crew member didn't ask for anything but Allen came up to him later in the day and handed him an autographed card of himself and Andrew Luck before taking a picture of him.

Like RGIII, Allen took our mic and interviewed a couple of players for us, including Andrew Luck. And, you know what, he asked some legitimate questions, including why the Colts would spend a third-round pick on a tight end (i.e. himself) after selecting Coby Fleener in Round 2. Luck's response to that question will be coming soon in an SB Nation YouTube video.

Very polite and media savvy. Allen seems to get it at an early age.

Trent Richardson is another favorite

Trent Richardson is very impressive as well. SB Nation interviewed him on Friday, and he was somewhat soft-spoken but he surprised me with a couple of things. First, that Leukemia survivor he took to her Senior Prom? He said if his schedule allows it he's going to try to make it to her graduation as well. Second, SB Nation asked him what he was going to do when his NFL money started coming in and he said he was going to make sure his mother, who has cancer, has the best doctors in the world.

Richardson also had a money line when he said that he ran angry in college -- "I'm not changing anything in the NFL."

When he made it to the Rose Bowl the next day for his trading card photo shoot, he was outgoing, personable and interacting with the other players.

I had no idea the depth of Richardson's character. It was eye-opening when you consider he's just 20 years old.

This is why I enjoyed this week so much: I had no idea David Wilson was so hilarious. Not to mention talented off the field, too.

More important than his ability to cut through rushing lanes is his ability to throw a grape about 30 yards in the air and then catch it in his mouth. (OK, maybe not as important.) As he was waiting to be interviewed by SB Nation, he started throwing a grape as high in the air as he could and catching it in his mouth. He also did three consecutive backflips in front of our cameras.

As you can tell, the NFLPA Rookie Premiere wasn't all about hard-hitting news. The players were in a relaxed environment throughout the weekend, which allowed their personalities to come through. 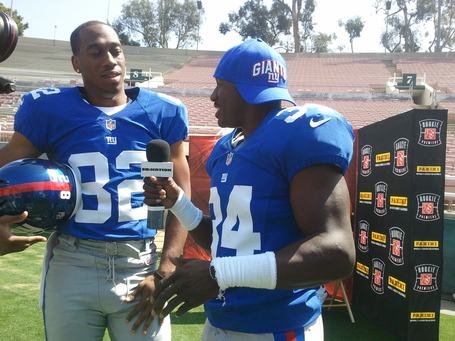 I can already tell the New York media will have a lot of fun with him.