ASHBURN, Va. -- On the third and final day of the Washington Redskins' rookie minicamp Sunday, head coach Mike Shanahan declared rookie quarterback, and No. 2 overall draft pick, Robert Griffin III the starter moving forward, ending any speculation that fourth-round pick Kirk Cousins or veteran Rex Grossman would be in an open competition for the job.

"Our gameplan is we're going to put him on the first team when we come back," Shanahan said Sunday. "He's the starter. Period."

Shanahan was impressed with how quickly Griffin picked up the offense and how smoothly the rookies played in 7-on-7 drills, but even if that hadn't been the case, Griffin would have started. Shanahan said that because of the value the Redskins gave up to move to the No. 2 spot — two first-rounders and a second-rounder — it wouldn't make any sense to have him sit on the bench. 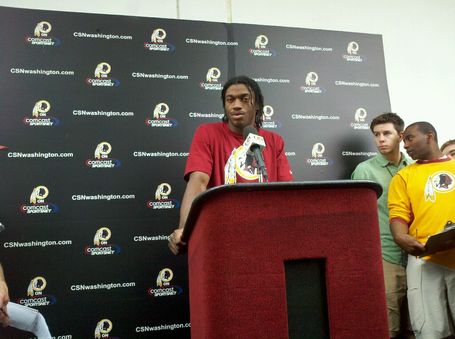 Griffin and Cousins actually roomed together at the team hotel during minicamp, and that's expected to remain the case during training camp later in the summer. Griffin will be practicing with the starters when OTAs commence later in May. Shanahan praised him for his film study and work ethic, calling RGIII "a natural thrower" with "Olympic speed," and went as far as to say he could do what no other quarterback in the league was capable of doing.

Griffin was his typical magnanimous self after his first rookie camp, denying reports that he'd purchased a Bentley — the only big buy he's made was an iPhone 4S, he said — and saying he wouldn't be flamboyant in front of the veterans, but he would hook them up with shoes if they asked.

He seemed comfortable on the field, missing some throws, but threading a few beautiful passes in between coverage that were dropped by other rookies trying out for the squad. He was also noticeably loose, high-fiving and slapping helmets, which he said he would likely scale back when the veterans are on the field.

In short, Griffin's first football activity as a Redskin was nothing short of a success, and it was among the most highly anticipated in D.C. in years — Shanahan noted there were more press there than he'd ever seen at a rookie camp, and SportsCenter cut live to Griffin's presser. The only question moving forward into summer is how much of the playbook will he be able to pick up, and how will he work with free-agent acquisitions Pierre Garçon, Josh Morgan, and the rest of the veterans?

For everything Redskins, check out Hogs Haven and SB Nation D.C.