JOPLIN, MO - A downpour is usually a welcome sight on the parched plains of extreme southwest Missouri, where the Ozark hills slump into the prairie. Residents of Joplin greet the overcast skies and bustling west winds with apprehension, a normal reaction given the F5 tornado that leveled a third of the city just 14 months ago.

The Thursday crowd at the Boys & Girls Club is a little rowdier than usual. Any anxiety from the previous night's storms melted away once they learned about some special guests coming to visit that day, and the raucous herd has somehow been corralled into effervescent rows of elementary school kids ready to welcome a busload of professional football players from the St. Louis Rams.

The 35 players, all rookies, and a gaggle of the team's staff caravaned to Joplin to build houses with Habitat for Humanity as part of the Governor's Joplin Challenge. Rain delayed the construction work, sending the players to the Boys and Girls Club instead, a pleasant reminder that storms also provide.

"A week or so ago we got a call from Habitat, asking that there was a rain day, could the Rams come out and do something with out kids," Joplin Boys and Girls Club director Rhonda Gorman said, who was a little surprised that the rain delivered some guests. "The kids really enjoyed it. We told them that they needed to be on their best behavior, please show them some respect, and they would get to meet the St. Louis Rams, and they were just thrilled." 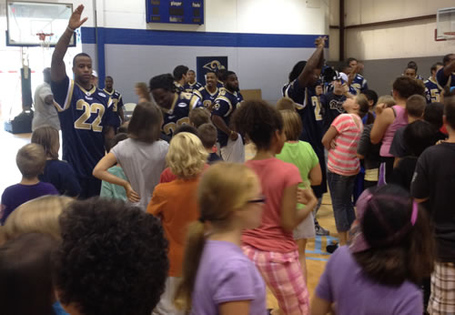 "Awesome," is how Hayden, a 10-year-old student at the Boys and Girls Club, described her day with the Rams. Asked if she was a Rams fan, she said, "kind of," and proceeded to tell me that No. 13 (wide receiver Chris Givens) was her favorite player.

Hayden's experience with the storm and rebuilding would be foreign to many adults. Her comments are a reminder of just how resilient children can be. That morning she had to comfort her little sister as the storms rolled through town. Hours later she and her friends laughed their way through back peddle drills with Janoris Jenkins.

"I think everybody was just excited, and it just made them feel better because there's been a lot of storms and rain," Hayden said.

Hayden and her fellow students at the Boys and Girls Club were not the only ones excited. The rookies, still kids themselves in many respects, were at home right away opening the session with warmups.

"This is the same warmup routine we do," explains one player to the platoon of size-5 feet standing in front of him.

I suspect Jeff Fisher's warmups are somewhat less squirrelly, but I doubt they're this much fun. If the smile on offensive guard Rokevious Watkins' face is any indication, few things could be this enjoyable. The scouting reports on Isaiah Pead are proving accurate as he ricochets around the gym in pass and catch drills.

"The kids have more energy than we do," Pead said as the sweat drips off his face. "It's fun. You remember those days, and you try to look at it from their perspective and how you would have felt if your running around with NFL players at that age. You gotta bring out the child inside." 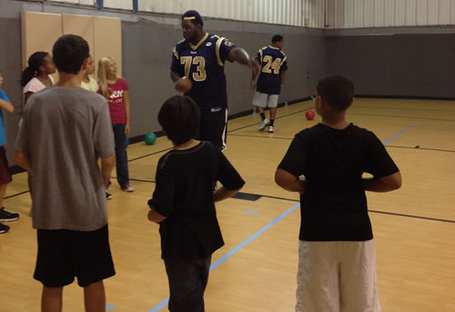 After a few hours of drills, autographs and some humbling pickup basketball (the team's PR man half jokingly tells a few players that they're lucky they play football instead), the players trade jerseys and caps for hammers and hardhats.

Last week the Kansas City Chiefs were here. On Friday, athletes from Mizzou are coming. Professional sports teams from across the state have been in and out of Joplin in the year since the devastating storm, and will return again to lend a hand as the city of about 50,000 pieces itself back together.

The steady stream of professional and college athletes visiting Joplin this summer are part of the Governor's Joplin Challenge, a project with Habitat for Humanity. Paid for in part with a Community Development Block Grant, and a ton of sweat equity, the project is building new houses in the storm-ravaged parts of the community. The Chiefs, Rams and the others are here to raise money and awareness for the project ... and pound a few nails in the process.

"After the tornado Habitat needed to take a bigger [role] and Governor Nixon knew that houses needed to be built," Scott Clayton, executive director of the Joplin Area Habitat for Humanity. "The Governor's Challenge includes 35 built with all the major sports teams being a part of that."

On top of the athletes and team staffers, the project includes area construction companies, plenty of volunteers and the families who will receive the houses with a 20-year, zero percent loan.

"Before the tornado we built three to five houses a year here," Clayton tells me. "We're looking at about 60 homes built this year."

So often in situations like these attention is fleeting. Disaster strikes, cameras descend, and the donations flow until something else distracts. This visit from the Rams is not the first, ditto for the Chiefs. Staff from those two teams, and other marquee sports teams in the state, were here in the weeks immediately after the May 2011 tornado, though last year's NFL lockout prevented staff and players from visiting together.

Clayton explains that a short attention span for helping neighbors has not been a problem in Joplin. His answer as to why that has not been the case is a simple one: resiliency.

"The town's coming back," Clayton says. "I think people really respect that the town is working hard and the city's coming back, fast."

"When we came last year, the devastation was so incredible, we knew that it was going to be a long-term effort to rebuild this community," Molly Higgins, the Rams' vice president of corporate communications and civic affairs, said. "At that point, we made a commitment to ourselves that we would be back."

Like the athletes, thousands more volunteers have been in Joplin in the months since the storm and will continue to arrive as the city sprouts anew. Missouri Governor Jay Nixon went back to the Rams and the other teams with the Challenge as part of an effort to sustain awareness and support of the Joplin rebuilding effort.

'What they're doing as far as exposure and the continued need as far as what still needs to be done in Joplin has been huge for us," Clayton said.

Things take a reflective tone at the job site, a hill lined with empty foundations and scraped barren by the tornado. It overlooks where the high school used to be. Among the missing sidewalks and piles of bricks too small to be gathered in the cleanup, a new neighborhood is blooming, thanks in part to efforts like this one from the Rams or last week's visit from the Chiefs.

Tracy Anderson lost her family home in the tornado. In three months, she will be moving out of her FEMA trailer and into a new home that Habitat for Humanity is helping her build, with some assistance from the Rams on Thursday. Tracy and her family arrive to help, and are immediately overcome at the sight of all the blue shirts swinging hammers.

"I did not realize how big football players were," she confesses. "I thought 'awesome,' that means the house will be built well."

The crew from the Rams hoisted the two-by-four and plywood forms that will be the walls of Tracy's house. "They got here before I did, and when I came and saw walls, I started crying," Anderson said.

She was tentative about moving back to Joplin, until she asked her daughter Rachael about it. "She told me 'that's our neighborhood, of course I want to go back.' We're going to bring everything back, neighborhoods, families," Anderson stated with the same unavoidable certainty of everyone I spoke to here. That determination is the most striking aspect of my visit.

"We lost our home, but so many people have lost a lot more, Anderson said. "It's a lot to go through to see your family and friends go through that, but to to see all these people come together, like strangers taking a five-hour bus ride to come here and help build our houses. I'm so amazed that there are all these people that haven't forgotten."

Even with the morning's rain delay, the 150 members of the Rams organization managed to get a solid amount of work done on three Habitat houses. Still, it was just a few hours and few walls in a rebuilding effort that will require years. The Blues, the Cardinals, the Chiefs, the Royals, the Rams and all the others busing in and out of Joplin in the last 14 months, are contributing more than just checks, service hours and even awareness of the task at hand for this community.

"There's more that goes into a sports organization than just playing the games," Kevin Demoff, the Rams' executive vice president of football operation, says. "Our job is bring people together; that's what sports do." 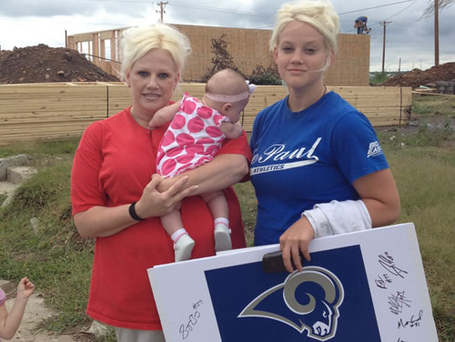