Broncos Playbook Is Now On Twitter, Thanks To DJ Williams

NFL teams are extremely protective of their playbooks. When you see a show like Hard Knocks and a player is about to be released by the team, the first thing they ask for is a copy of their playbook. The NFL is a highly secretive league and teams hold close to the vest things like their playbooks.

Enter DJ Williams. The Denver Broncos linebacker has been in the league for eight years so he understands the paranoia around playbooks, which is why it was so surprising to see him post this image on Twitter: 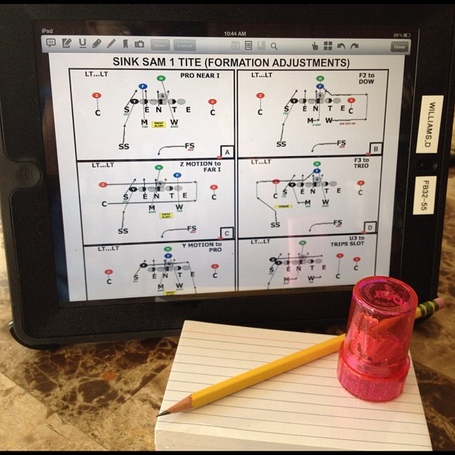 That's a picture of his playbook. He writes on Twitter:

Coach just told me I have to learn a new position over the weekn,, we have IPads as playbooks now, but I'm old skool I'm using flash cards & a #2 pencil..#ifitaintbrokedontfixit

As SB Nation's Mile High Report points out, one of the issues with moving playbooks to iPads was keeping them secure. NFL teams have done the legwork to ensure that the playbooks can't be stolen electronically.