Five things NFL teams should do to make going to the game worth the price of admission.

The NFL is worried about you.

Imagine commissioner Roger Goodell taking the place of one of your crazy relatives, excoriating you at Thanksgiving for being too skinny and not visiting more often. Uncle Roger is mostly worried about the latter. Fans like you are not visiting NFL stadiums like you used to.

Weaknesses in professional football's financial structure are few and far between since the NFL and the NFLPA settled their labor dispute almost a year ago. Extensions for the league's broadcast deals signed in the wake of the new CBA will bring a 60 percent revenue increase through 2022, and television ratings reached new highs as fans forgot all about the lockout that almost scrapped last season.

More people than ever are watching NFL games, but they choose to do so from the comfort of the home, cheek-pinching relatives or not. A July 2 article in the Wall Street Journal reported that league attendance numbers were down by 4.5 percent since 2007.

Ticket sales are part of what the league calls retained revenue. The league's revenue sharing model is a complex equation, but the stadium attendance matters because owners get to keep a larger overall portion of those dollars, in some cases all of it all of it, for items like concessions and stadium pro shop sales.

In order to entice fans like you to visit more often, the NFL is planning on a few improvements to the game day experience. The league plans to make WiFi available at all stadiums, where cellphone service has been spotty in the past. Fans could be able to listen to mic'd up players and refs, even as the league loosens restrictions on riling up the crowds.

Will Internet access and more Gary Glitter interludes at the stadium trump your preference to watch games in hi-def from the well-worn grooves of your own couch? 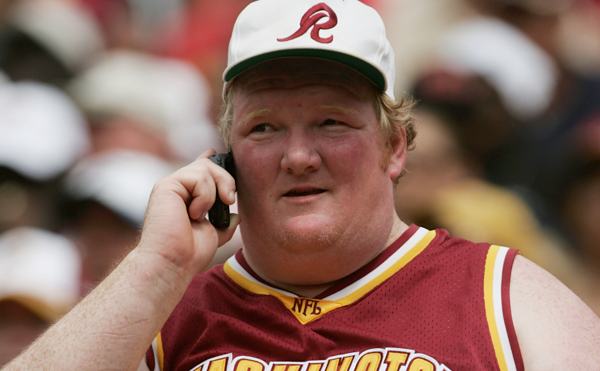 The mere fact that you're reading this is one reminder of just how important the role of technology has become, particularly the second screen, for fans on game day. Our roundtable started there.

For 2012, the 49ers are investing in the distributed antennas systems. ... That's a huge problem at Candlestick. Horrible 3G service, which makes it damn near impossible to upload pictures during the game. I have to imagine other stadiums have that problem.

The WiFi issue should be the top item on the NFL's plate right now. It's a problem at Arrowhead Stadium, too. I can't really use my phone for tweeting most of the time. The NFL doesn't really gain any points with the fans for implementing it (which they are) because we already expect to be able to use our mobile devices anywhere we go. A football game is no different.

I would say that for the average fan, just cell data availability is what matters. They just want to be able to post to Facebook or Twitter or check another score or something.

The NFL is a product built for a mass audience, a diverse audience. Sticking mom, dad and the kids in the bleachers next to a trio of dudes decked out in Zubaz and 1990s Starter gear concealing an interminable fountain of 7-and-7s can make for an uncomfortable pairing.

I've spoken with the Redskins brass before about dedicating a section of the stadiums for families ... ie, no alcohol is served there. They said it was a good idea but blew it off. I know Cleveland does it and there are several articles out there praising it. The fights and cursing at games get worse each year (at least at Fedex) and families are staying home. It's a shame kids can't go to games because of the violence and foul language.

Chargers do the family section thing, too. It works out quite well. Those tickets are even a few bucks cheaper than surrounding seats. Highly recommended.

On the flip side of that, the notion of standing room only sections for fans was brought up and greeted with a mixed reaction.

Standing room sections I'm a fan of ... allows fans that are low budget to get into the game.

The Eagles built in a similar area to the Linc and even sell standing room tickets, but its really not the same. It ends up being a pretty frustrating experience as people park themselves in the best viewing spots and don't leave. At baseball games they move around a lot more.

I've been to Jerry World's SRO ... standing room is literally everywhere ... 360 degrees at the top of the lower level, the one endzone, which is on a slight ramp, and the steps going up to the upper deck have perch areas to stand. It was really hard to get to a spot where we could see the action since we went in just after kickoff ...

Redskins literally removed seats and built bars ... so at least that has clear views for every person. 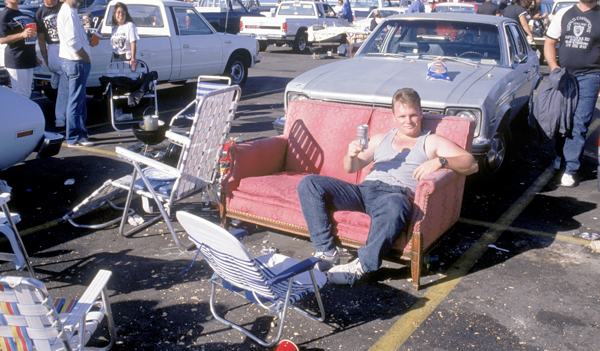 The pre-game party is one thing that sets football apart from other spots, a fact not lost with this group. Of course, tailgating comes in different forms.

Tailgating should be mandatory ... this coming from the Chiefs fan. Tailgating is a big deal in Kansas City and a huge part of the entire experience of going to a game. Honestly, when the Chiefs are horrible, it's easier to look forward to the tailgating than the actual game. Embracing the fact that going to an NFL game is a full-day event should be part of it.

The Raiders have been setting up a fan zone outside the stadium prior to the game. It has kids games, food, and Raider Legend meet and greets. It is hugely popular, especially with those fans who aren't set up for tailgating.

I went to a Saints game last year and they don't have tailgating that I saw. They have a huge outdoor bar area with a band and beer stands everywhere next to the dome, but no cars, baggo, grills. It's New Orleans, though, so the party was definitely rolling.

Turning Up The Intensity 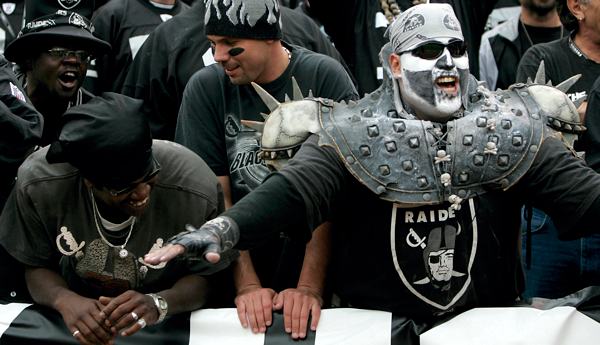 Making the game day atmosphere more akin to that of college football was another factor cited in the NFL's recent push for changes to the stadium experience. The league wants to lighten up on some of the restrictions allowing teams to pipe in music and rev up fans.

From Neal Cooling at SB Nation's Steelers blog Behind the Steel Curtain:

They need to encourage more yelling and screaming ... football fans are heavily involved.

Make the music louder, and perhaps come up with some kind of theme song. I was born and raised in Pittsburgh, but now live in Minnesota. I've seen many games in both stadiums, and I can say the best part of watching at Heinz Field is when they show the highlight video with Styx's Renegade playing in the background. When the Vikings come out of the tunnel to Led Zeppelin's Immigrant Song, the place explodes. You don't get that at home when you're listening to Curt Menafee drone on about Fantasy stats.

Not everyone shared that sentiment.

I'm convinced that the lack of blaring Guns N' Roses music every free moment is a big part of the reason Euro soccer games have such great atmosphere. Get rid of the music. Stop instructing me when to cheer. Let the crowd create its own atmosphere.

The best moments in any live game come when the home team is on defense, the clock is running and it's 3rd down. Because the crowd is never louder and it's completely organic. They're not drowned out by ACDC. The atmosphere is being created by the moment. More of that would make for a much better stadium experience.

I agree 100 percent with Jason here. Soccer matches are incredible live because they aren't trying to amuse you with gimmicks while the TV audience is being sold something. The running time of soccer creates a great atmosphere and even in MLS they have designated sections run by fans who are nuts for the home team and make up their own cheers. It's not run by the marketing department.

Alfie Crow at SB Nation's Jaguars blog Big Cat Country says it might be as simple as not getting stabbed:

As far as game experience to improve ... this is always lost on me since I've always gone to watch a football game. I don't care what else is happening unless someone's trying to shank me, but I'm in Jax, not Oakland. I realize I'm the minority in that, though.

The elephant in the room, so far, in this discussion is the cost of going to a game. Is that threatening attendance numbers?

To go to an NFL game, just one game, will cost the average Indianapolis household $500. That's just for one, any old game. That's an average, regardless of the opponent. That number doesn't fluctuate too much whether the team is 12-0 or 0-12. Decent seats at Lucas Oil Stadium are, on average, $150 a pop.

I really can't think of any enhancements that justify that. Better instant replay? WiFi in the stadium? Those are nice, but they still aren't worth $500.

I also think that's exactly WHY the NFL has become the dominant television sport. First there are only eight games to go to ... second, I've always heard that watching the game on TV, especially in the HD era, is better any way (better bathrooms, better food and much, much cheaper). Every sport is catering to the wealthier live crowd any way and it's a sad state of affairs, but it's also just reality. I wouldn't be surprised if we have a proposed new stadium coming the future that's NOTHING but luxury boxes. Much easier to sell a $250 K season to a corporation than try and squeeze blood from a stone.

I agree with Brad. The number one improvement that the league can make is getting ticket prices down. Why are college games so energetic? Because they have students who get in free in most places -- or at a deep discount if not totally free. Meanwhile, the NFL is too busy selling seats to corporate types. Corporate CEOs don't make noise.

WiFi, bigger scoreboards, and even ticket prices can only go so far. Ultimately, the product on the field matters. The NFL's greatest success as a professional sports league has been its parity. Year to year, teams can rise from the ashes of an afterthought to a playoff contender. However, a few teams recently have struggled to make themselves competitive, and their attendance numbers reflect that.

Look at a few notable examples, using attendance data available from ESPN. In 2007 the Washington Redskins, a team with a rich history and a dedicated fan base, went 9-7. It was the last winning season the franchise had. In 2007, Washington had the highest average attendance of any team in the league at 88,090. In 2011, Washington's average attendance was 76,921.

A big drop, no? That period does cover the recession, which is an important caveat to note, a very important caveat. Nevertheless, when it comes to the options fans have for watching games at home versus the cost of going to the stadium to see a team that continues to struggle, well, what would you choose?

Ultimately, the uniqueness of seeing a game live alongside tens of thousands of your fellow fans is what sets the stadium experience apart from anything else. Cooling sums it up:

In the end, though, I think their push to greatly increase their technological capabilities and improve their brand through that technology has ultimately watered down the live experience. It's just better and easier in many ways to watch the game at home. Without going heavily into visceral and emotive features fans can only experience when surrounded by 65,000 other fans, they're going to continue to choose to stay at home.

To make your fan experience the best it can be, keep checking SB Nation's NFL hub.