The Football Helmet Of The Future

A closer look at the Riddell 360, the latest offering from the leading football helmet manufacturer, and maybe one piece of a formula for football to move forward.

Share All sharing options for: The Football Helmet Of The Future

A few weeks ago, the folks at Riddell sent SB Nation their newest football helmet, the Riddell 360, the latest in a long line of next generation helmets. It came in a big shiny case and got everyone in the office excited. But we were asked to review it, too, and absent a football field in the office, that meant doing some research.

Riddell's been building helmets for players at every level of football for upwards of 80 years -- including providing the NFL with helmets for decades -- but it's the past few years where the technology's begun to accelerate.

And as football season approaches this fall and a nation again wonders whether it's "moral" to love football, this sort of new helmet technology is an important part of the conversation.

"Player protection is the number one priority in developing new helmet technology," a Riddell spokesperson told me when I brought up the issue this week. But in the next breath, "It’s important to remember that no helmet can prevent a concussion."

Because of the ongoing controversy surrounding football, in general, equipment manufacturers find themselves in a tricky position in 2012. Manufacturers can spend endless amounts of money researching and building the best equipment possible, but as football deals with its own identity crisis, a company like Riddell is an easy target for litigation when things go wrong.

WARNING: NO HELMET CAN PREVENT SERIOUS HEAD OR NECK INJURIES A PLAYER MIGHT RECEIVE WHILE PARTICIPATING IN FOOTBALL.

It's a loud reminder of where football is in 2012. As for where it's going? The 360 offers some hope for the future. It's been tested against 1.4 million impacts, and if it's not guaranteed to prevent concussions, it was certainly designed to try. One of the biggest challenges football players face at any level is finding a helmet that fits--the less room there is for a player's head to bounce around inside the helmet, the better.

Riddell's 360 model tries to solve this with an "occipital lock" that keeps the helmet firm and stable on any player's head. The inside of the helmet looks like this: 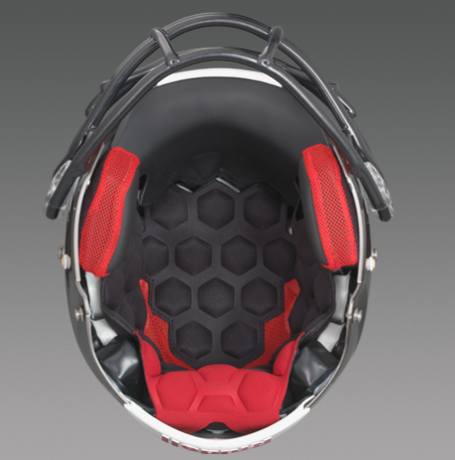 The ridged feature helps manage energy from any hits, all in an effort to limit the pounding that might be transferred a player's head. And then there's the facemask, which flexes on impact to absorb energy from head-on hits, limiting what goes into the helmet. 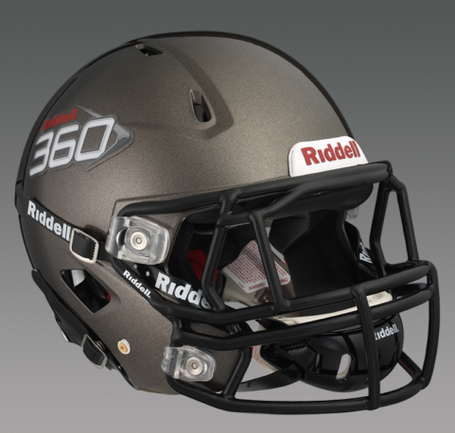 But even if the science behind all this is mostly just a bunch of impenetrable scientific buzzwords involving physics properties most of us forgot in the 10th grade, the end result is what's interesting here. There are two important points:

The Va. Tech methodology (.pdf) is dense, but to a completely untrained amateur reading all this as a football fan, the implications seem more clear.

Any sport that involves repeated collisions and blows to the head is going to carry some significant risks. There's no magic bullet to make football safer, and if it were as easy as pouring millions into helmet development, that would've happened by now.

What the Riddell 360 can't prevent underscores what's been obvious for a few years now: If we're serious about making football safer for future generations, it won't happen without rule changes, better injury monitoring at every level, and probably a change in the way players think about the game and their responsibilities to a team. It's all about minimizing the inevitable risks any way we can, and better helmet technology will absolutely be part of the formula, too.

On that front, the Riddell 360 seems like an excellent start.