Mike Wallace was expected to report to the Pittsburgh Steelers on Tuesday and that's what he did with a number of media outlets reporting Wallace has arrived at the Steelers facility. Wallace and Maurice Jones-Drew were the two remaining holdouts in the NFL.

Wallace missed the entire offseason because he did not sign his restricted free agent tender which is worth just under $3 million.

Wallace is a restricted free agent which means the Steelers own his rights. Assuming he actually signs he will be under contract for one year. The Steelers can continue to retain his rights next year via the use of the franchise tag.

Wallace has been seeking a multi-year deal from the Steelers, who gave teammate Antonio Brown a five-year deal earlier this year. It's not clear if the Steelers plan to keep Wallace (they will say they do) or if they will attempt to trade him, as has been rumored.

For the photo proof of Wallace in Pittsburgh, here's Josina Anderson's picture: 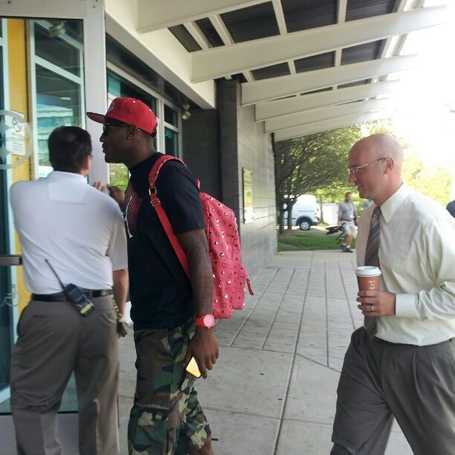 For more on the Steelers, visit Behind The Steel Curtain and SB Nation Pittsburgh.