The return of the NFL means the return of large men getting injured. SB Nation's Medical Expert breaks down all the major Week 1 injuries.

It's only Monday of Week 1, and the injury bug has already made its presence felt in the NFL. Here are the key injuries from the week so far, and their potential impact:

The Titans' starter injured his left shoulder while attempting to make a tackle on a fumble return (that actually was an incompletion and ultimately overturned) in Tennessee's 34-13 loss to the Patriots. Locker described the injury, which occurred to his non-throwing shoulder, as a bruise and head coach Mike Munchak voiced confidence that his second-year QB should be able to start next week at San Diego. As of now, there are no known plans for an MRI or any other testing; however, if Locker's condition worsens over the week, Matt Hasslebeck would be in line to get the nod for Tennessee against the Chargers.

Skelton suffered what is preliminarily being called a high ankle sprain in the fourth quarter of Arizona's 20-16 win over Seattle, pending further tests. The injury occurred when Skelton was driven into the ground on a passing play, leaving the Arizona signal caller in excruciating pain before being carted off the field.

The term "high ankle sprain" is usually used to describe an injury to the syndesmotic ligaments of the ankle, which hold the lower ends of the tibia and fibula (lower leg bones) together. Injuries to these ligaments are usually more serious than to other areas of the ankle, causing significant pain and difficulty bearing weight. The severity of and prognosis for recovery for ankle sprains are often a source of confusion, primarily due to misunderstanding over what exactly the different "grades" of sprains actually mean. In brief:

A Grade 1 sprain could require anywhere from 1-4 weeks of recovery time; a Grade 2 or 3 sprain, in which there is some degree of looseness of the ankle joint, could take longer and even require surgery if the tear is complete.

Skelton was replaced by Kevin Kolb, who led the Cardinals on their winning drive and would appear likely to start for Arizona in their Week 2 contest at New England. 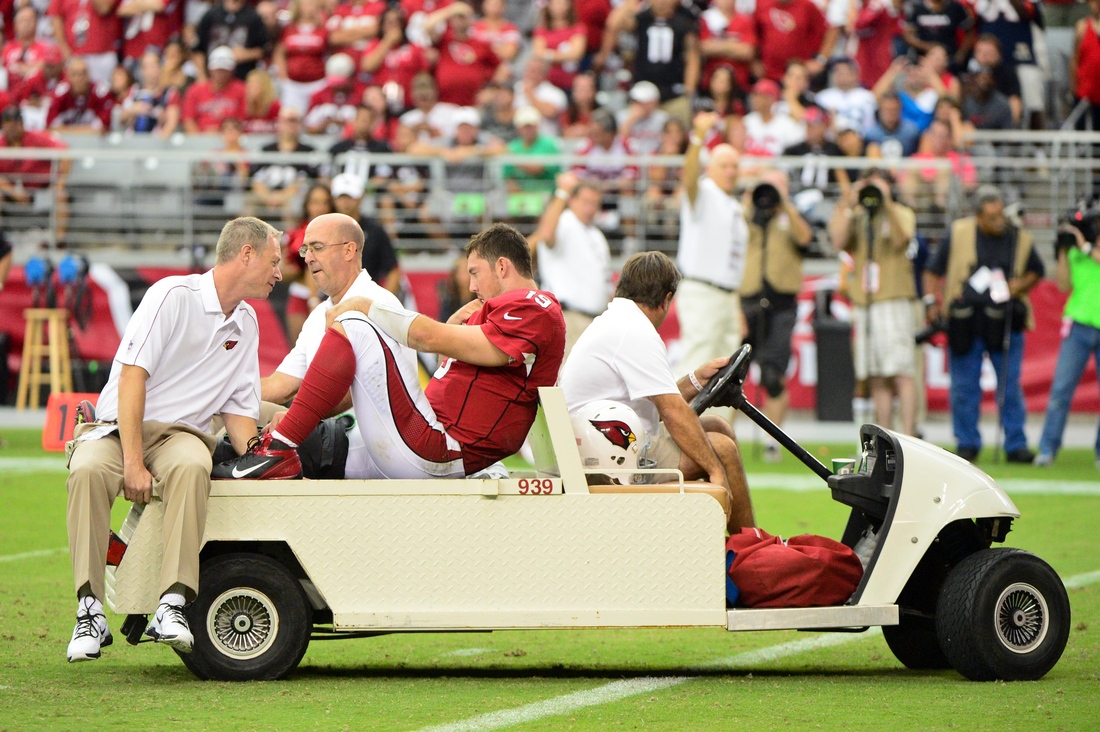 Pending an MRI on Tuesday, it would appear that the news on Jackson's left knee, which buckled awkwardly in the second quarter of the Bills' 48-28 thrashing to the New York Jets, may not be as gloomy as initially feared.

The initial diagnosis is a sprained lateral collateral ligament, most commonly sustained as the result of a force to the inside of the knee. If this indeed is the affected ligament, recovery time could be anywhere on the order of days to weeks, depending upon the degree of the sprain. In the meantime, the one shining star for the Bills yesterday was backup RB C.J. Spiller, who amassed 194 yards from scrimmage and appears more than ready to assume the bulk of the carries next week against Kansas City if Jackson misses time. For Jackson, any lost time would be a bitter pill to swallow after missing the final six games of the 2011 season with a broken leg.

Jennings, who replaced Maurice Jones-Drew as the starter on Sunday against Minnesota following MJD's lengthy offseason holdout, missed the entire second half with a left knee injury. Jones-Drew, who was likely to regain his starting job as soon as next week against Houston anyway, ended up taking the bulk of the Jaguars' carries following the injury and ended up with 77 yards on the ground. It doesn't appear Jennings' injury is serious, but his workload is likely to take a dip in coming weeks, either way.

Garcon started fast in Washington's surprising 40-32 win at New Orleans, including an 88-yard touchdown connection with rookie QB Robert Griffin III, but his participation was limited in the second half due to a foot injury. While x-rays were negative following the game and Head Coach Mike Shanahan did not voice any concerns about Garcon's long-term prospects, it remains to be seen whether the Redskins' free agent acquisition will develop swelling or worsening soreness in the coming days, which could affect his status for next week's game against St. Louis. 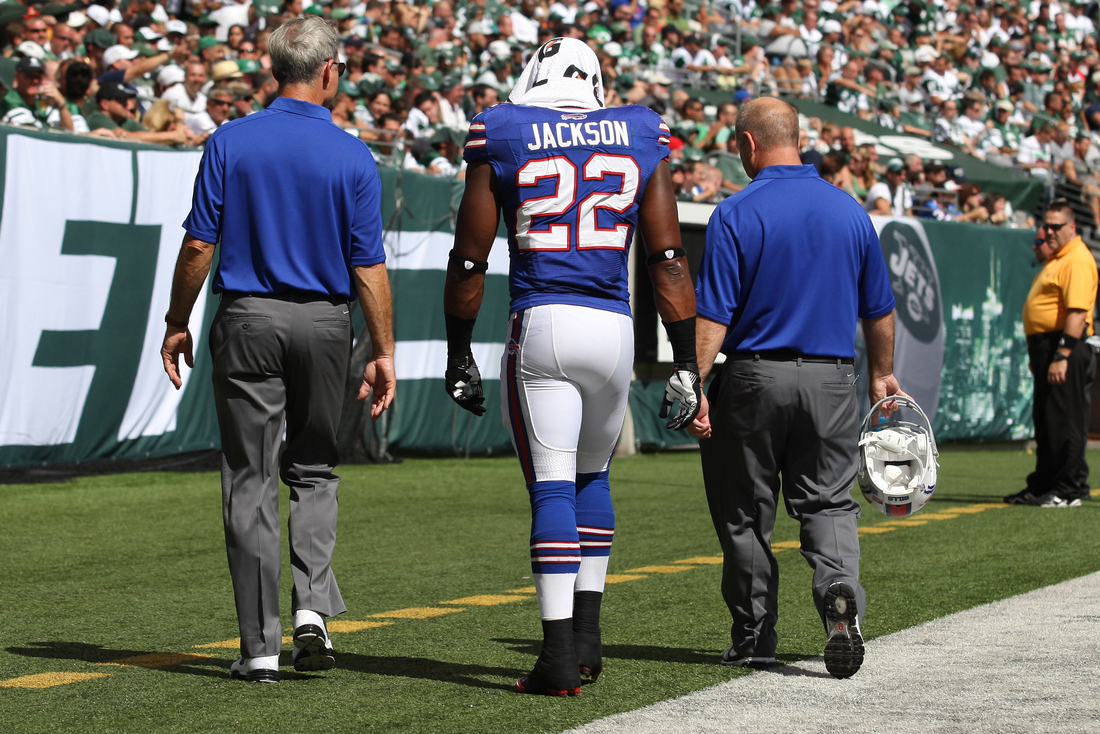 The Bills' second receiver suffered what looks to be a potentially serious right knee injury in the fourth quarter against the Jets and left the field on a cart. Nelson appeared to hurt the knee when making a cut, and according to Head Coach Chan Gailey, "it doesn't look good right now." Results of an MRI set for today will determine the extent of the injury.

In what was likely the scariest injury of Week 1, Saffold, the Rams' left tackle, fell in a heap during the fourth quarter of his team's loss to Detroit and lay motionless before being taken off the field in a stretcher with an apparent neck injury. Reports indicate that Saffold did have movement and sensation in his extremities, and after being taken to a Detroit-area hospital for further evaluation, MRI and x-rays were negative. Saffold stayed overnight for precautionary measures, but the early diagnosis is a sprained neck, with an outstanding prognosis.

The Indianapolis OLB, the team's all-time leader in sacks and one of the few holdovers from the team's glory years of the last decade, injured his left ankle in the first quarter of the Colts' 41-21 loss to Chicago and did not return to the game. Freeney is scheduled to have an MRI today.