RGIII Plays Savior, And Redskins Fans Can Go Insane All Over Again

Robert Griffin III dominated for the Redskins in New Orleans Sunday, and after 362 yards, two touchdowns, and one of the best rookie debuts in NFL history, all the Redskins insanity doesn't seem totally crazy.

Share All sharing options for: RGIII Plays Savior, And Redskins Fans Can Go Insane All Over Again

The best part about sports is that sometimes one athlete or coach can change the fate of an entire franchise just by showing up. This is how athletes come off seeming like superheroes even to grown adults who should know better. The worst part about sports is that these stories rarely happen, and instead we talk ourselves into superheroes that end up crushing our hope even more then the last guy. Then it's onto the next guy.

This has been Redskins fans for 20 years.

"He's just going to suck," my friend said Saturday afternoon. He's been a Redskins fan his entire life. "There will be no horrible injuries and it won't be the coach. He's just not going to be good. And in three or four years people will look back on all this and the Redskins will be an even bigger joke than they already are. I'm positive."

I live in Washington, and that's probably the most sincere expression of optimism Redskins have anymore. Where they openly expect doom as some sort of desperate defense mechanism, hoping that maybe somehow they can avoid jinxing it this time.

These are the beaten-down psychotics RGIII inherited as fans last April. 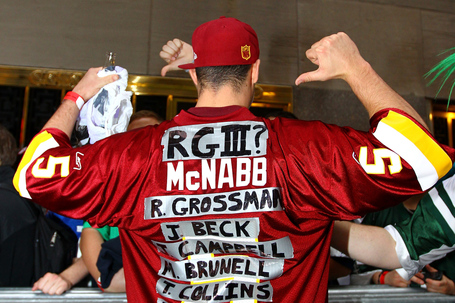 A doctor in D.C. once told me that when she made her rounds on Mondays during football season, the mood of the entire hospital -- doctors, nurses, patients -- swung dramatically depending on how the Redskins did the day before. It's like this all over town. All of which makes it even sadder that the Skins have been such a disaster during the past two decades.

There was Heath Shuler, the superstar QB from Tennessee they drafted no. 3 overall. God he was awful. Ryan Leaf gets all the credit when people talk about draft busts, but Shuler was just as hopeless. The Redskins quarterback of the future in 1994 was out of the league by 1999.

And then there was his replacement, Gus Frerotte, who immortalized himself celebrating a touchdown by slamming his head into the endzone wall and spraining his neck. A Hall of Fame Redskins moment.

Other saviors have included Patrick Ramsey, Jason Campbell, and of course, Jeff George, the quarterback Dan Snyder hand picked to compete with Brad Johnson, who had just finished a 1999 season where he led the most successful Redskins team of the past 20 years. What better way to build on that success than bringing in a high-priced bitchy veteran like Jeff George to obliterate team chemistry?

That same summer Snyder spent millions bringing in other aging veterans like Bruce Smith, Mark Carrier, and Deion Sanders, and all summer long D.C. fans were talking Super Bowl. Of course it all went to hell almost immediately, the previous year's success went up in smoke, Brad Johnson got pushed out, and a few years later he won a Super Bowl with Tampa Bay while the Redskins went 7-9 rotating between Shane Matthews, Ramsey, and Danny Wuerffel.

Then we fast forward a few years. Signing Mike Shanahan was literally a drunk decision made one Sunday night in 2009 (via the Washington Post):

Trudging down the stairwell of one of his private planes in the hangar of the Dulles Jet Center, burgundy-and-gold striped necktie askew, he mouthed an expletive passengers behind him could clearly hear. In that moment, hours after the Redskins had lost to the lowly Lions — the worst team in pro football — in Detroit, Snyder resembled less of an NFL owner than an exasperated day trader.

... Snyder retreated to the pilot’s lounge inside the hangar with two of his closest advisers at the time, Dave Donovan, the team’s chief operating officer, and Karl Swanson, Snyder’s senior vice president of public relations. Vinny Cerrato, the executive vice president of personnel and Snyder’s right-hand man, joined them after he had taken the team plane home with the players and their beleaguered coach, Jim Zorn.

While watching NBC’s "Sunday Night Football" game between the Arizona Cardinals and Indianapolis Colts, the four men drank glasses of Sassicaia, a bold Tuscan red that is a Snyder favorite, those who were present said. They added that Snyder eventually graduated to Crown Royal.

Finally, Snyder turned to the others. "Let’s go get Mike Shanahan," he said.

All told, the Skins have hired five head coaches in a little over 10 years -- Marty Schottenheimer in 2001, Steve Spurrier in 2002, Joe Gibbs in 2004, Jim Zorn in 2008, and Mike Shanahan in 2010 -- and each one has been the supposed start of a "New Era". Every single time, the new era isn't just a failure (combined coaching records: 73-103), but a joyless failure. Where the Redskins aren't just bad, but doomed from the very beginning. Miserable to watch for their own fans and everyone else. This includes the past two years with Shanahan, but of course it does. This team deserves to fail for the Crown Royal anecdote alone.

All D.C. sports teams are an exercise in misery -- from the Wizards and Gilbert Arenas, the Caps collapses over the past five years, even the Nats this fall, shutting down their best player in the one year they actually have a shot at a World Series -- but no franchise fails like the city's most adored franchise does every year, as the Redskins find new and expensive ways to get everyone's hopes up and then twist the knife deeper into old D.C.'s psyche.

This brings us to Sunday.

The Redskins traded St. Louis three first round picks for the chance to draft Robert Griffin III this past April, and on Sunday against the Saints in the Superdome he was totally and completely worth it. As one Sports Illustrated writer wrote, "the Rams might wind up demanding Washington's first-round picks in perpetuity, plus insist Daniel Snyder pick up the tab for all those costly improvements St. Louis is seeking for the Edward Jones Dome."

It wasn't supposed to happen this way. The Saints were supposed to come out and destroy everything in their path as a statement to Roger Goodell. The Redskins were supposed to sputter along with maybe a few RGIII bright spots hopefully providing a silver lining. If there's one thing we've learned about the Redskins it's that no single offseason is ever enough to change everything. But there were two plays Sunday where the rookie quarterback gave everyone pause.

Those two plays capture the entire game for me. Griffin had more highlights -- he finished with 362 total yards, 2 TDs, no interceptions, and a win -- but it was those two plays where he looked truly scary.

Athletic enough to pull a 26-yard pass out of thin air on a broken play, smart and confident enough to opt for a 27-yard pass over a 7-yard run on 3rd-and-6. We've never seen a running quarterback who, for lack of a better phrase, runs to set up the pass. Sunday RGIII did it all day, and shredded New Orleans, and made NFL fans everywhere think maybe this is only the beginning.

It's one game, obviously, and it was a crappy Saints defense. And those are just two plays. And it's the Redskins and good things just aren't supposed to happen to Dan Snyder. (Tony Dungy Sunday night: "My big winner is Daniel Snyder, because he took Robert Griffin III. He’s been looking for that star-power guy. He’s riding home on his plane right now saying, I found him." Gross.)

But at the same time: Sometimes the force of one personality really can change everything. Isn't that exactly what happened with RGIII at Baylor and Waco, Texas?

I'm not a Redskins fan and I love making fun of this Godforsaken franchise, but it's hard not to be a little mesmerized with RGIII. He's the guy who graduated college in three years, earned a graduate degree in his fourth, and breathed new life into a dead football program and the lifeless town it plays in. He was a world class track star during his spare time in college, a Heisman Trophy winner last fall, and now finds himself the spokesman for what's gotta be a hundred different brands.

None of it explains why RGIII could save the Redskins, except to say this: success looks as effortless and inevitable for RGIII as hopeless, mind-bending incompetence looks for Daniel Snyder's Redskins. The RGIII Redskins Era is the unstoppable force vs. the immovable and totally insufferable object, and in New Orleans RGIII won out.

So here we are. Insanity is doing the same thing over and over again and expecting different results, and insanity has been the Redskins and their fans for the better part of two decades. RGIII brings more of the same, but for the first time it doesn't seem totally crazy. Yeah, the background for all this is no different than Steve Spurrier or Jason Campbell or a thousand other idiotic Redskins stories. But the ending might be?

You gotta admit, Sunday made you wonder. 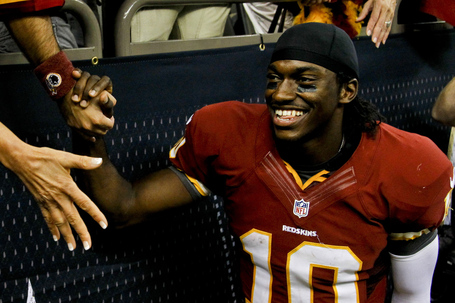