Replacement referees were on the field for Week 1 in the NFL. SB Nation reviews their work through the eyes of the fan.

The NFL simply cannot lose these days. The league came back from a lockout in 2011 to post its best rating ever in 2011. The 2012 NFL season jumped out to a rousing start in spite of a bounty scandal and a growing body of disturbing knowledge of what exactly head injuries can do to players. The only crack in the NFL's golden foundation right now is a cast of replacement referees culled from far and wide, from Arizona charter high schools to forgotten junior college conferences, helping save the league some $5,000 per game.

Some, like Peter King, look at the replacements and say that they were fine. Reviews from fans were less than glowing, especially fans whose teams came out on the wrong end of referee befuddlement or those who missed out on a planned bathroom break as the early Sunday games bled into the 4:25 p.m games.

We took a look at a few of the week's officiating boners through the eyes of our SB Nation NFL blogs. This is by no means a comprehensive list of referee bloopers, just a handful of mistakes that raise the ire of fans.

I guess we know what the league did with some of the money it saved by using replacement officials: bought some extra timeouts. It was like Oprah discovered the therapeutic power of a 60 second break on Sunday to frenzied coaches seeking refuge from life's stormy seas.

Referee Bruce Hermansen gave the Seahawks an extra timeout toward the end of their 20-16 loss to the Cardinals. An injury timeout following a Doug Baldwin incomplete pass inside the final two minutes of the game was initially charged as Seattle's final timeout. Later, Hermansen awarded Pete Carroll another timeout after deciding that the Baldwin play didn't count because the clock stopped on the incomplete pass. Unfortunately, the rules say otherwise.

Even with the win, Cardinals fans were still troubled by the mistake. From Revenge of the Birds:

The league dodged a bullet. As much as we dislike the regular refs, this is getting out of hand. The Cards got a win, but the league has a bit of egg on its face.

The Detroit Lions also got an extra timeout in the final two minutes of play thanks to a clock operator error that the replacement refs failed to notice. Rams quarterback Sam Bradford slid out of bounds on a 2nd-and-12 scramble with 2:38 left in their game. On the field, the officials said he was in bounds, but the clock operator stopped the clock, chewing up four seconds and taking the game clock and the play clock out of sequence.

Fumblr: Week 1 As Seen By The Internet

St. Louis should have been able to run the clock down to the two-minute warning. Instead, they had to take a timeout to avoid the delay penalty and run a third down play ahead of the two-minute mark.

Rams fans that haven't seen their team win many games in recent years could only swallow the bitter pill and walk away with a moral victory, a meaningless, crappy moral victory. From Turf Show Times:

Still, it's hard not to wonder what might have happened had the Rams not taken a timeout and come back onto the field for 3rd-and-9 after the two minute warning. They would have been able to burn even more time off the clock, likely forcing the Lions to take a timeout, their last one, prior to the Rams field goal. Instead, they were able to use it on the last drive, the winning drive.

Fisher, a member of the league's competition committee, was quick to point out that the clock operators are league employees and not part of the replacement officials. He did say that the officials on the field can correct a clock error... as long as they're actually aware of it.

No officiating crew struggled with the clock more than Gerald Wright's group of fill-in zebras who had the privilege of calling Sunday night's ratings bonanza between the Denver Broncos and the Pittsburgh Steelers.

The Broncos won the game handily, 31-19, but the scoreboard was no consolation to the fans at Mile High Report, who were most upset when 44 seconds disappeared into the ephemeral over the course of a challenge from Steelers head coach Mike Tomlin.

To this point I have been on the side of the NFL's replacement officials. That ended with their performance during Sunday Night Football between the Broncos and Pittsburgh Steelers. Sure, I could point to a missed 12-men penalty that wasn't called, or the phantom time out that Ben Roethlisberger was granted 1 full second after a delay of game. No, this was even more egregious.

Did it end up making a difference? Not on the scoreboard. Tracy Porter made sure of that, but with 44 full seconds back on the clock when Pittsburgh started that drive, perhaps they are more patient.

One thing's for sure - the NFL needs to get the real guys back, and FAST!

Mile High Report has a complete analysis of the lost 44 seconds and video proof right here.

Replacement officials clearly failed their course in clock management. The league's crash course to bring them up to speed on the subtle differences between NFL football and the high school game must have completely left out the chapter of the rule book on blocking.

Arrowhead Pride has a frame-by-frame breakdown of the play, and were generally more accepting than some might have been about the whole thing.

Now that I have seen it I can say it is indeed a bad call. It didn't make a difference in the game -- the Chiefs are losing that one either way -- but the call was still wrong. 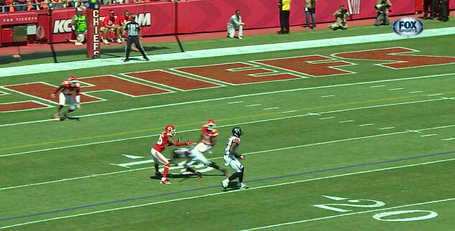 Jim Harbaugh, who could explode at any minute, was rightly fuming in one of worst performances by replacement refs so far. The 49ers ultimately won the game, but the Packers got a little help when refs missed an illegal block in the back on Anthony Dixon on Randall Cobb's punt return touchdown.

"Bullcrap," said Jim Harbaugh in a sentiment most fans would probably agree with after a week of watching replacement refs.

Even horseplay caught was off limits with replacement officials on the field. Cortland Finnegan and Stephen Tulloch, former teammates in Tennessee, were caught messing around after the Lions-Rams game by referee Shannon Eastin, who promptly shut down their tomfoolery.

Deadspin has a list of some more replacement ref gaffs from Sunday's games, and there are too many to put into one complete round up. Let us know in the comments what other blown calls marred Week 1 in the NFL, bonus points for links and photo evidence.