The NFL Doesn't Care What You Think Of Replacement Refs

The NFL's replacement referees had a bad day all over the league Sunday, but more than anything, the replacement refs just remind us why Roger Goodell's NFL is so dominant in the first place.

Share All sharing options for: The NFL Doesn't Care What You Think Of Replacement Refs

In a league with 32 mostly-even teams, everyone from management to coaches to players to fans likes to repeat that "every inch matters". So the referees -- the ones literally placing the ball on the field after every play -- are a pretty crucial piece of the formula.

In an ordinary year the NFL refs would at least look like an objective constant in that formula, but over the first two weeks of the season this year, that illusion's been pretty well destroyed. Every play with the replacement refs is a new adventure in figuring it out on the fly, one five minute conference at a time, and sometimes it works better than others. 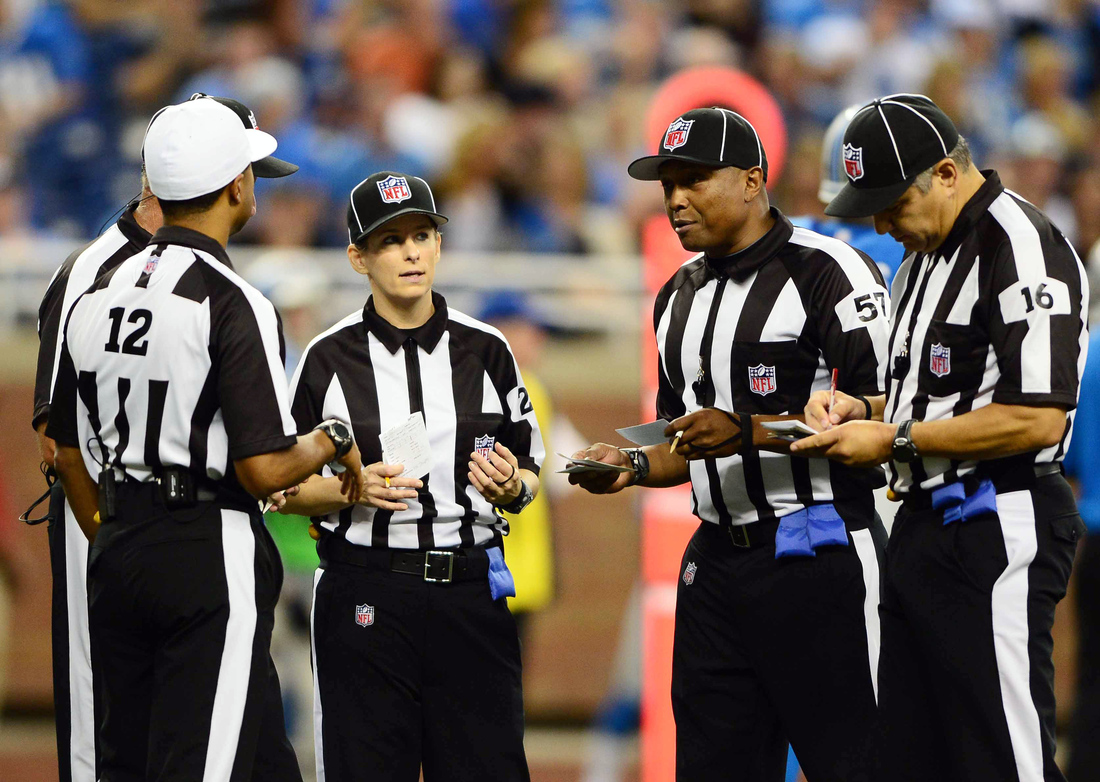 The day began with a ref being pulled from the Saints-Panthers game at the last minute when the NFL realized he was a Saints fan, and from there it only got worse. The Ravens-Eagles game featured fights and blown calls, the Jets-Steelers game gave us a horrendous pass interference call, the Rams and Redskins was dominated by a questionable call on an overturned touchdown and chaos throughout, and ... You get the point. Even competent refs miss calls in every game, but Sunday there was no more illusion that replacement refs can feign competence.

In the locker room after the Ravens game, Ray Lewis spoke for everyone:

"The game is played the way the game is played, but there’s some serious calls the refs missed. And that’s just the way it is, man, all around the league. And that, for our league to be what it is, we have to correct that. Because these games are critical."

"How much longer are we gonna keep going through this whole process? I don’t have the answer, I just know across the league teams and the league are being affected by it. It’s not just this game, it’s all across the league. And so if they want the league to have the same reputation it’s always had, they’ll address the problem."

The problem is the NFL doesn't necessarily see any of this as a problem.

Even if everyone -- from management to coaches to players to fans -- thinks the replacement refs undermine the quality of the game, the NFL has nothing to worry about after Sunday.

The NFL's not a neighborhood restaurant, where a couple of embarrassing reviews threaten the business. The NFL is McDonalds, a corporation so ubiquitous and entrenched all over America and the world that it almost doesn't matter what they actually serve customers.

Think about Thursday Night Football. The NFL decided to broadcast a game every Thursday this year, in part to bolster the appeal own TV channel -- The NFL Network, which broadcasts Thursday Night Football -- and also as the next step to monopolizing America's attention for the entire week during football season. Roger Goodell's been moving in this direction for years, as he's realized that there's no tipping point when Americans stop caring about the NFL.

But when was the last time we saw a kickass Thursday night game on NFL Network? Look at the Packers and Bears game last week. They didn't have an offensive touchdown through three quarters, both teams sputtered up and down the field, and everyone pretended it was a "hard-nosed" game that wasn't completely unwatchable. Like Tom Scocca wrote a few weeks ago, the NFL doesn't care if games are unwatchable. That Thursday night game was a perfect microcosm.

It doesn't matter that teams have maybe one-and-a-half days to practice before the Thursday games, and we get a bunch of sloppy, forgettable games. We're all so addicted to football that even crappy Thursday Night Football games just help the NFL economy churn along -- there will always be fantasy football chats to tell you which players to start Thursday Night, the pre-game storylines lead SportsCenter every Thursday afternoon, and on Friday everyone still writes their columns and those columns lead every website and sports page in America. This is why it feels naive when people complain about the replacement refs and "integrity of the game". Forget "the game".

The NFL's number one asset is its own ubiquity -- entertainment that no one can escape, and something we all argue about afterward. It doesn't even matter if the football falls flat.

After Bears-Packers, nobody spent the next day complaining about the game. The discussion was about whether Jay Cutler could be a franchise quarterback, whether the Packers defense was "back", and where each team would go from there. And it all happened on TV channels and websites full of ads from companies who pay to sponsor the NFL discussions. Because they know we'll all watch, read, and listen. Even after a miserable Bears-Packers game in the middle of the week. The NFL is bulletproof even when the football is dead and lifeless. 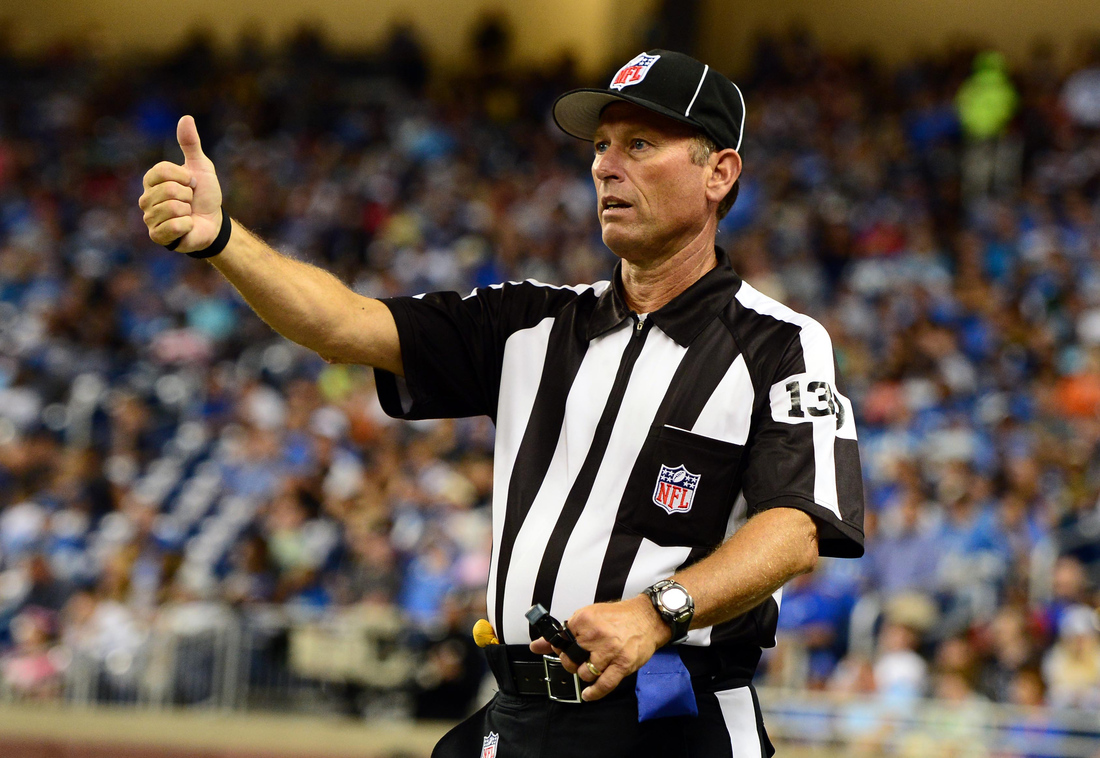 So now, after Sunday's games, the replacement refs are probably the biggest league-wide story, and just about everyone agrees they're incapable of doing the job.

But everyone will still talk about the NFL all day, all week, and all year. Even if this week's arguments revolve around how horrible the refs have been, they revolve around pro football and will lead SportsCenter and dominate every website and talk radio show, which means the NFL's winning. The ref controversy just lays the NFL's business model transparent, where football itself barely matters.

So I can't bring myself to care about the replacement refs in the meantime. They're just another variable in a sport full of them, and getting all indignant and writing 30 articles about it gets us nowhere but deeper in the NFL's pocket. If the referees lockout is going to end, it'll happen because a replacement ref gets someone injured, or maybe when a game spirals out of control, or when a powerful team gets blatantly screwed on national television. Any of those PR disasters could force Goodell's hand in negotiations. Until then, it's hard to believe that a weekend of mediocre officiating changes anything.

Nobody's going to stop devouring the NFL, just like nobody stops going to McDonalds when they get old enough to realize the food kinda sucks. The food isn't the point, and neither is the football.