Andrew Luck led a fourth quarter comeback to win the game and give him a leg up on RGIII in Week 2.

Week 2 in the NFL belonged to the rookies, the rookie quarterbacks specifically. Five signal callers started Sunday's games with no prior professional experience before Week 1 and Brandon Weeden's short-lived baseball career.

And what about the top two picks in the 2012 NFL Draft, Andrew Luck and Robert Griffin III? Last week belonged to RGIII, who lit up the New Orleans Saints for 40 points to earn his first NFL win. Luck struggled through his season debut, throwing a trio of interceptions. Week 2 reversed roles for the brightest pair of youngsters in the game. RGIII threw his first interception while the Stanford product used the last 30 seconds of his game to give Indianapolis a win in their home opener.

Let's compare and contrast the top two picks for Week 2.

Both quarterbacks came out of Week 2 in good shape on the stat sheet. Luck had the better passing numbers, going 20-for-31 with 224 yards and two touchdowns. He rebounded nicely from last week's three interceptions, throwing no picks against the Vikings defense.

Look at this touchdown to tight end Dwayne Allen that Luck threw in the first quarter. He has a pretty clean pocket, which was not too common for him, and throws a dart to his tight end for the 3-yard score. Allen is surrounded by defenders, but Luck places it perfectly and throws it with enough authority that he avoids trouble and lets Allen make the grab.

Griffin went 20-for-29 with 206 yards, one touchdown and one interception, the first pick of his NFL career. Griffin was helped greatly by his legs. He had 82 yards on 11 carries, several of them designed run plays, and scored both of Washington's offensive touchdowns on the run, even including what sure looked like an homage to Tebow on his first touchdown.

RGIII's first NFL interception was nothing egregious. The Rams cornerbacks kept RGIII's targets pretty tightly covered throughout the game, and that was this case on this ball to tight end Fred Davis, who was doubled with a linebacker and cornerback Cortland Finnegan. Right tackle Tyler Polumbus was little more than a worn down speed bump for defensive end Chris Long, who crashed the pocket and forced Griffin to his left as he made the throw. It's easy to judge what a quarterback should and shouldn't do, but it seems ill-advised to force a throw into double coverage while off balance.

Give Luck some credit for his wheels, too. Nobody is going to confuse him for a quarterback like RGIII, who adds another dimension to the game with his running ability, but Luck did manage to turn on his, um, burners to escape pressure a few times, avoiding at least three sacks.

The Rams opened the fourth quarter with a touchdown and made a two-point conversion to take a three-point lead over the Redskins. This was a little different scenario than last week when Washington's defense had to beat back a late surge from the Saints to preserve the lead.

Griffin was 5-for-11 on Washington's four drives in the game's final frame. His offense drew three penalties on those drives. Washington's most successful drive in the fourth quarter owed most of its yardage to RGIII's legs. He ran four times for 34 yards with his targets covered. 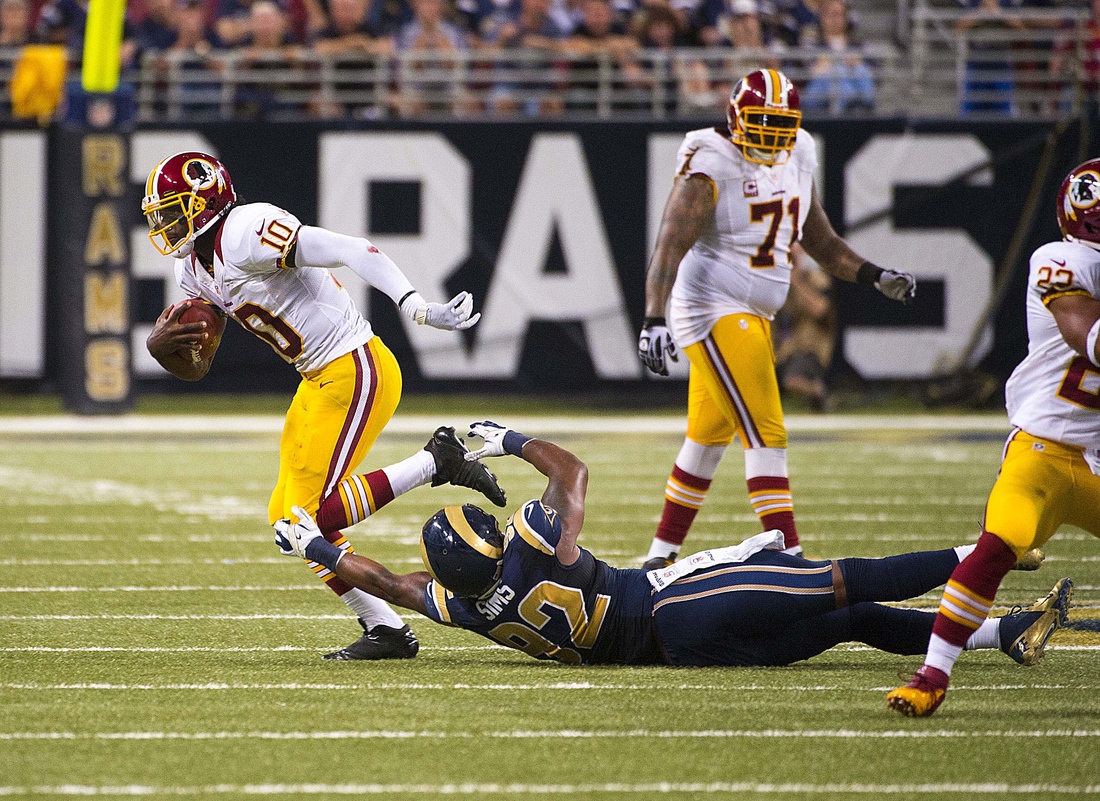 Photo by Scott Rovak, US PRESSWIRE

On the last drive, he ran on the first snap to get a new set of downs. After that, he threw the ball three times, completing two passes that left them short of the first down, but in field goal range. Why he wasn't running more is a bit of a mystery, but the clock was not on their side and they were out of timeouts. Whatever late game heroics he had left and the potentially game-tying field goal were spoiled by Josh Morgan's unsportsmanlike conduct penalty.

The fans at Hogs Haven summed it up:

RGIII is a playmaker and you trusted a kicker who's proven to suck from long range over him?

Luck had the fairy tale fourth quarter this week. Minnesota tied the game in the fourth quarter. With 31 seconds left, Luck moved the ball 44 yards down the field, setting up a game-winning field goal.

Stampede Blue put it in perspective:

This team is one of the youngest in the league. That group of young players is led by the rookie quarterback Andrew Luck. He was spectacular today. He avoided a ton of pressure (pretty much every play). He made the throws. He made some nice runs. He led a game winning drive in his second NFL game. He got his first NFL win ... I'm continually amazed at his pocket presence and mobility. That may be his best ability, and if not his best, it is certainly the most useful this year.

Neither player got much help from his team's offense. Each played well in spite of poor protection from his offensive line. Luck was sacked twice and hit three times, and those numbers would have been more had he not been so quick to get the ball out of his hands. 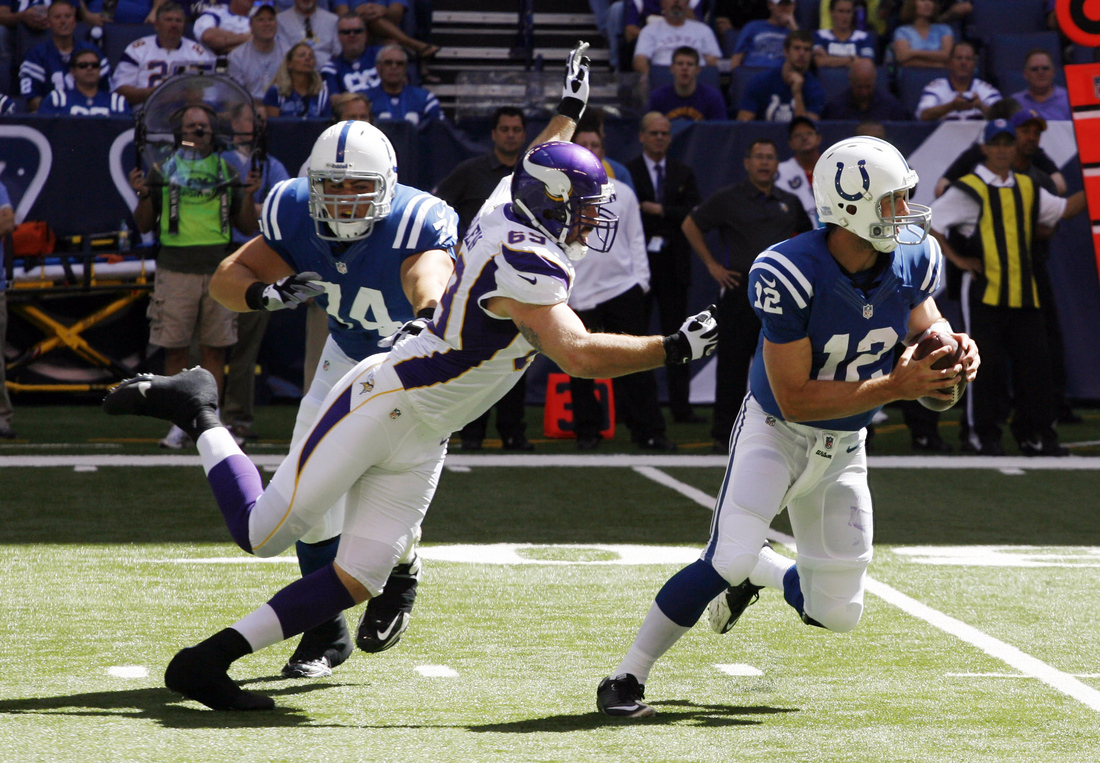 Photo by Brian Spurlock, US PRESSWIRE

RGIII was sacked just once and hit four times. He, too, found himself under constant pressure, even after burning the defense a couple times with his ability to escape.

Luck had a much better day from his receivers than RGIII did. Reggie Wayne, Luck's top target last week, found himself covered too much to be the go-to guy this week, though he did manage to score a touchdown. Instead, the rookie turned to Donnie Avery, who caught nine of 10 balls thrown his way for 111 yards.

Pierre Garcon left last week's game against the Saints with a foot injury, and that kept him on the sidelines this week. Aldrick Robinson dropped what should have been a touchdown pass from RGIII, but that was not the only instance of his receivers letting him down in Sunday's loss. The worst moment came on the Redskins' final possession when RGIII found Josh Morgan for a 7-yard gain that left them at fourth-and-1. It should have been a 47-yard field goal attempt, but Morgan let Finnegan get to him. After the tackle, Morgan threw the ball at Finnegan, getting flagged for 15-yard unsportsmanlike conduct penalty that made it a 62-yard attempt to tie the game. And that was enough to give St. Louis a win.

Week 2 belonged to Andrew Luck, getting his first NFL win and doing it in front of a home crowd starving for something positive after the rough end of another era.

In reality, it was a winner all around for the rookie quarterbacks this week, especially these two. There was nothing on Sunday to indicate that either player is anything less than the pivot point of a franchise turnaround, exactly what they were drafted to be.