Fumblr! Week 2 Of The NFL Through The Eyes Of The Internet

Welcome to Fumblr.com! The hot new sports blogging platform makes it easy to follow Week 2 of the NFL as seen by Internet users. To the memes!

Share All sharing options for: Fumblr! Week 2 Of The NFL Through The Eyes Of The Internet 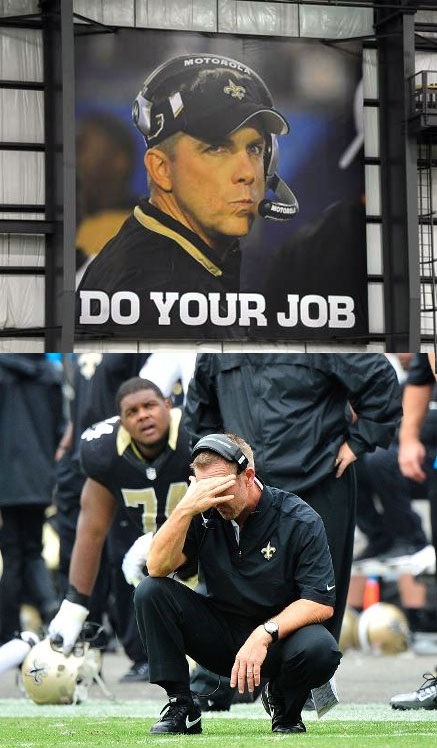 One of my favorite stories from the preseason was the giant poster that hung above the Saints' practice field: Sean Payton's scowling face with the words DO YOUR JOB. Like, after all the coaches got suspended and Bill Parcells turned down the interim job, the Saints said, "F--k it, we're hiring this poster." And so I imagine Payton's Blue Steel hovering over every Saint who makes a mistake this year. "Oh man, I'm not doing my job right. The poster's going to be so disappointed."

Also, before the Saints started 0-2, my brain ran wild with daydreams about the poster winning Coach of the Year and demanding more money from the Saints and leaving to coach another team, sparking other organizations to hire posters to coach their teams.

"Ladies and gentlemen, the next coach of the Cleveland Browns." 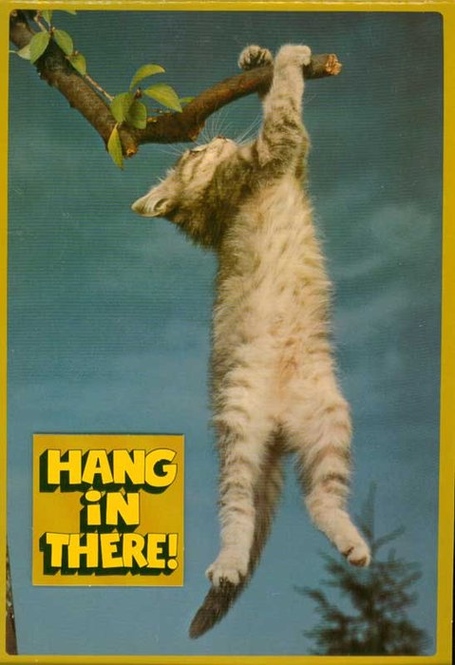 If you're inclined to believe in a higher power -- at least one higher than Roger Goodell -- please take a moment to pray for the Chiefs. Scott Pioli's leadership promises all the paranoia of the Patriots organization with none of the competence. The Chiefs underperformed with first-class A-hole Todd Haley at the helm, but ironically might have gotten worse without him. The players' palpable relief at his firing last year -- rising to be the only team to beat Green Bay in the regular season -- opened the door for Romeo Crennel to be a head coach in the pros again. Why? Because NFL owners are basically Charlie Brown holding an infinite number of footballs made of billions dollars.

Through two games, the Chiefs have played patsy to the Falcons (understandable) and the Bills (less so). Before that, their inept first-team defense helped Russell Wilson win the quarterback job in Seattle, and there's nothing to suggest that anything will improve in the weeks to come. The Chiefs are back to where they've been: helmed by a mediocre quarterback, wasting their most talented players, and giving goal-line carries to someone besides their most talented running back. Lookin' good, Peyton Hillis!

Not bad, but Von Miller and Sean Weatherspoon performed my favorite celebrations this week. 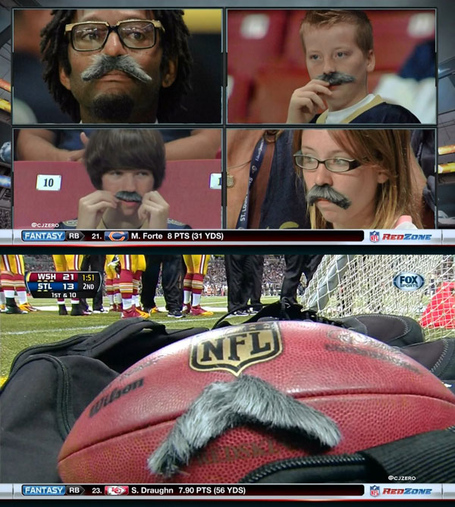 Rams fans were given and encouraged to wear fake gray mustaches to celebrate their new coach, fresh off of 16 years of intermittent winning in Tennessee. I'm not impressed by the design, but man, there is something magical in the execution. That outdated, folksy mustache gives anyone who wears it instant gravitas. Witness: 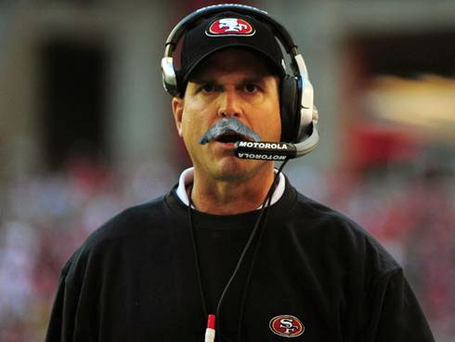 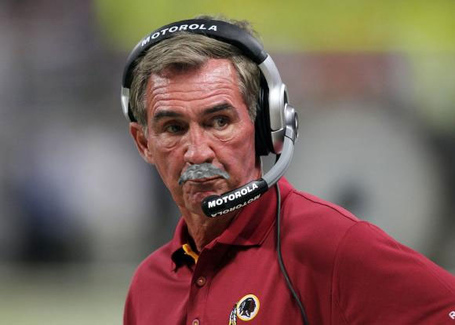 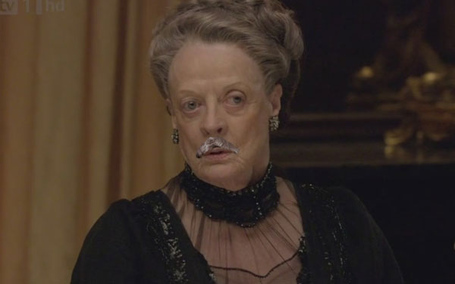 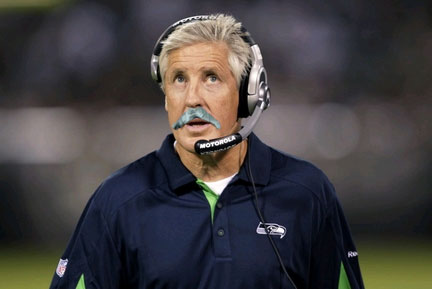 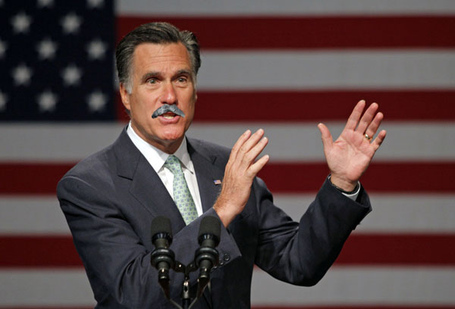 This is everything beautiful and terrible about the NFL (larger version here). Russell Wilson couldn't find an open receiver, so he tucked the ball and headed downfield toward the left sideline. Along the way, Golden Tate -- an enthusiastic downfield blocker who could possibly get a reputation as the next Hines Ward -- laid out the Cowboys' Sean Lee, who would head to the sideline after the play but later return to the game.

Perhaps five years ago, this might have been a clean block. Tate leads -- or at least attempts to lead -- with his shoulder into Lee's midsection. But heads are unwieldy things, and Tate tucks his chin as his helmet collides somewhere between Lee's sternum and facemask.

The hit on Lee is an illegal blindside block. Lee is considered defenseless, which means you can't lower your head & hit in head/neck area.

Golden Tate, to my knowledge, wasn't trying to decapitate Sean Lee. He was trying to make a block to help his team win, and -- if I had to guess -- he did it with legal intentions but illegal execution. As a human with concerns about safety in the NFL, I was worried about Lee -- but only after I shouted, "BOOM! That block was AWESOME!" to my co-workers. The NFL doesn't appeal to our ideal selves.

For what it's worth, the replacement refs threw a flag on this play -- but on the Cowboys, for a gentle push of Wilson as he ran out of bounds. They are awful. Speaking of which: 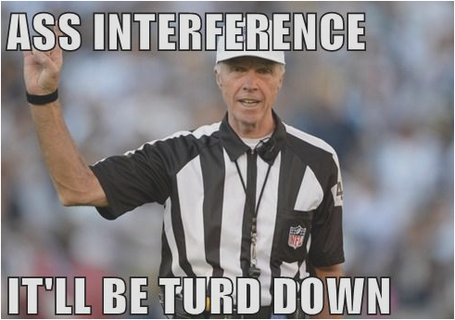 Thanks to the wonders of the Internet, it's relatively easy to track just how bad the replacement officials have been with missed calls (six free yards for the Broncos, anyone?). But the single biggest impact on the game stems from the endless conferences that kill the flow of the game while extending the telecast's run time. 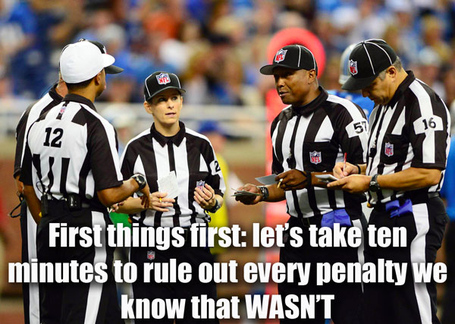 "SportsCenter" was scheduled to run at 11:30 p.m. Eastern on Monday night. At that point, the 4th quarter of Broncos-Falcons was barely underway; the telecast ran until almost 12:30. Now, no one expects an NFL game to run shorter than three hours -- before the season, late Sunday games were bumped to 4:25 to allow for this reality -- but four hours is a substantial wrench to throw into the gears of television scheduling. WILL NO ONE THINK OF THE "60 MINUTES" VIEWERS?