No, Bill Belichick Has Nothing To Say About The Ref He Grabbed

Share All sharing options for: No, Bill Belichick Has Nothing To Say About The Ref He Grabbed 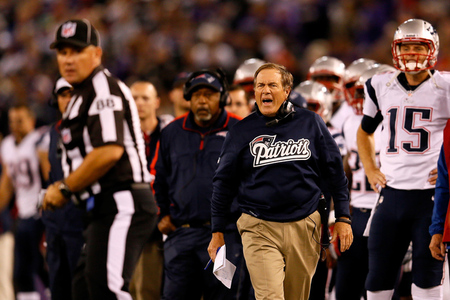 After Sunday night's Patriots-Ravens, you may have seen Bill Belichick chase down and grab one of the replacement refs as he ran off the field. We have a clip of the incident over here. It's very much against NFL rules, especially in a week where the NFL made a special point of telling coaches not to intimidate replacement refs. Afterward he spoke to the media about the incident, and the transcript is below:

(opening statement) "Good football game. Tough loss. Both teams competed hard. In the end, we just came up a little bit short. Not too much more to say than that."

(on getting the referees’ attention at the end of the game) "I’m not going to comment about that. You saw the game. What did we have, 30 penalties called in that game?"

(on if he thinks he’ll get fined for trying to grab the referee) "No."

And one other follow-up a few minutes later:

Annnnd... Alright! Glad that's all on the record.

As controversy swirls, this has been another entry in the Bill Belichick Press Conference Hall of Fame, where the best coach in football elevates saying nothing and hating everyone to an art form like no other. One day somebody should make a greatest hits DVD from all of Belichick's miserable press conferences. (And by the way: He's definitely, definitely getting fined.)