The hits just keep coming from the NFL following the conclusion of Monday night's game between the Green Bay Packers and Seattle Seahawks.

Hot on the heels of an unfortunate and quickly deleted tweet from the official NFL Twitter feed and amid a flurry of incensed tweets from players and observers, the NFL put up a picture on their official Facebook page that appeared to be designed to intentionally draw the ire of Packers fans -- or perhaps just NFL fans in general. The Facebook post and associated picture has since been taken down.

The below screencap comes to us courtesy of @BCSGuru and an SB Nation reader: 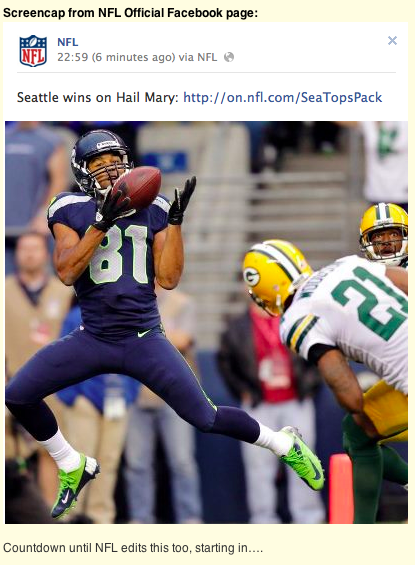 The picture -- which was likely the most recent available "Seahawks player catching a football" picture available on the presswire at the time -- did not in any way show the controversial play that ended the game in a Seahawks win. The posting of the picture along with the caption and even the URL of the associated story could be viewed as a whitewashing of the call on the field issued by the replacement referees. At the very least, it would at first blush appear to be a slap in the face of Packers fans.

For more on the Packers, visit Acme Packing Company. For all your Seahawks news and discussion, check out Field Gulls and SB Nation Seattle.