The refs blew the call on the final play of the Packers-Seahawks game and here's why that's great news.

"The Catch" is already taken so I don't know what the final play in the Green Bay Packers and Seattle Seahawks game will be called. Seahawks receiver Golden Tate caught a 24-yard Hail Mary touchdown pass from Russell Wilson as time expired to beat the Packers in one of the wildest Monday Night Football games in history.

Of course, it's never that easy. Tate's "catch" is very much in question.

More: Everything You Need To Know About Packers-Seahawks Game

The replacement referees appeared to botch this call from start to finish, and if you're banging your head on the desk for the regular refs to comeback then this is the best possible outcome you could've wished for. Apologies to those at Acme Packing Company who are feeling about as low as you can feel as a football fan right now, but we needed a massive replacement ref screw-up on the biggest stage -- that's you, Monday Night Football -- to shine the spotlight on the NFL's lockout of the referees.

It's time to end it, Roger Goodell. Bring the regular refs back. You can't possibly look at this play and come to any other conclusion than the referees got it wrong. Even if you watch the same thing I watch and come to a different conclusion, then you have to wonder why the replacement referees screwed up their mechanics on the biggest play of one of the biggest games.

They can't handle the pressure. This game made it obvious (as if it wasn't before).

Let's take a look-see at why the NFL and the replacement referees are feeling the heat this morning. 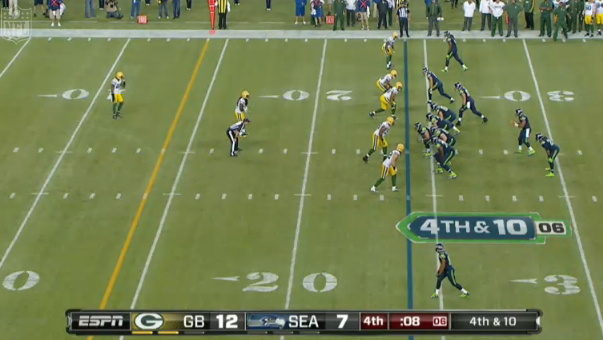 The Seahawks had one final play at the 24-yard line, which is far enough back from the end zone that it's Hail Mary time. Teams have all different kinds of different versions of a Hail Mary, but at the end of the day you're throwing it up there and hoping for a prayer. 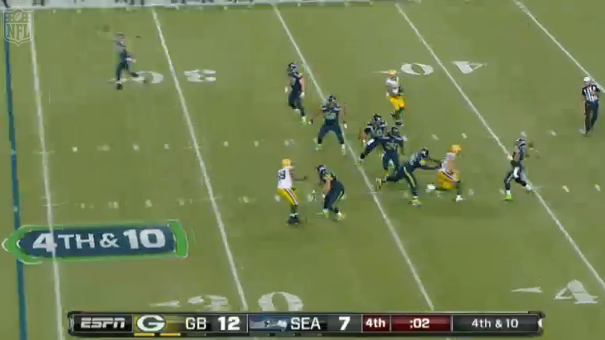 Russell Wilson had fine protection. He had more than enough time to move around in the pocket and allow his receivers to get set up in the end zone. He releases the ball right at the 39-yard line and it lands near the back of the end zone so this pass was somewhere around 46 or 47 yards in the air. 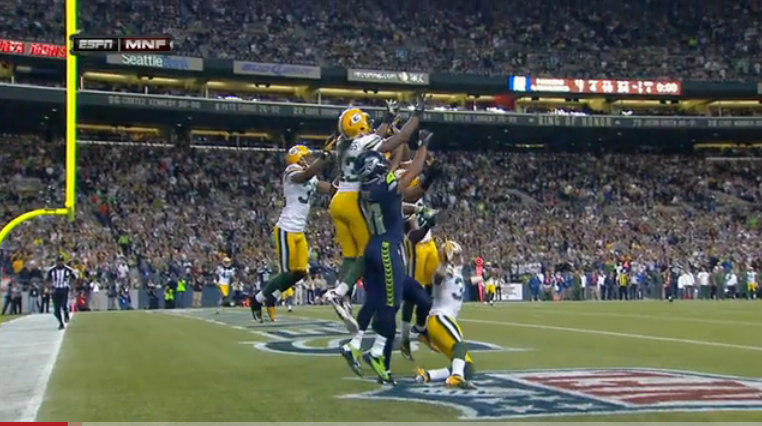 This is how it all looks with the bail in the air. The Packer to focus on is M.D. Jennings (43) while it's Tate for the Seahawks. 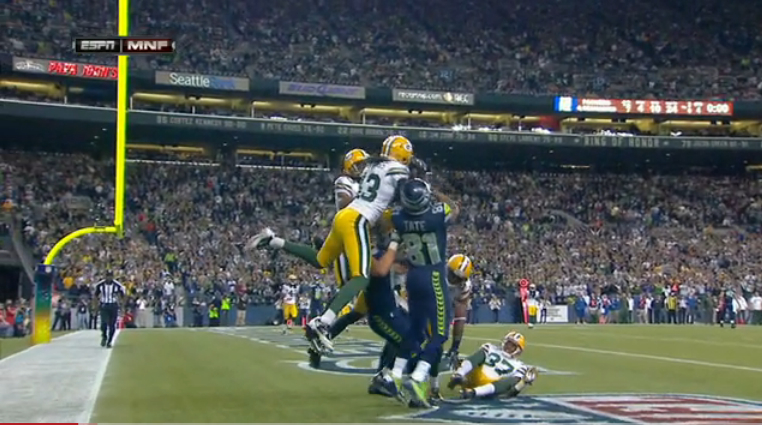 A key part of evidence can be seen in this screen shot -- Jennings has the leverage on Tate. He makes contact with the ball at a higher point and has more control of the ball than Tate, who appears to only have his arm on it. Jennings has both hands on the ball. 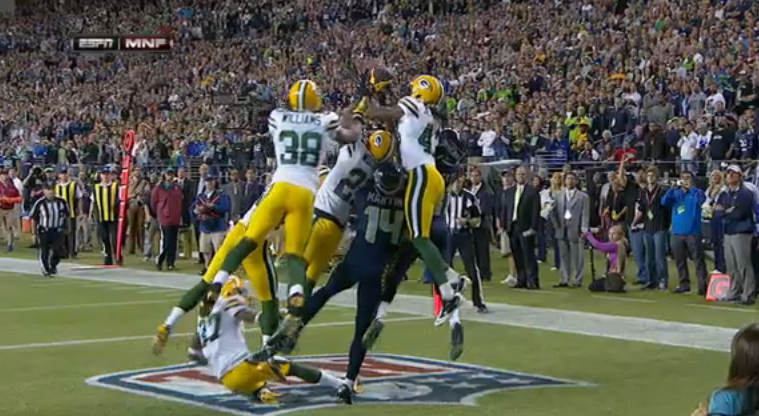 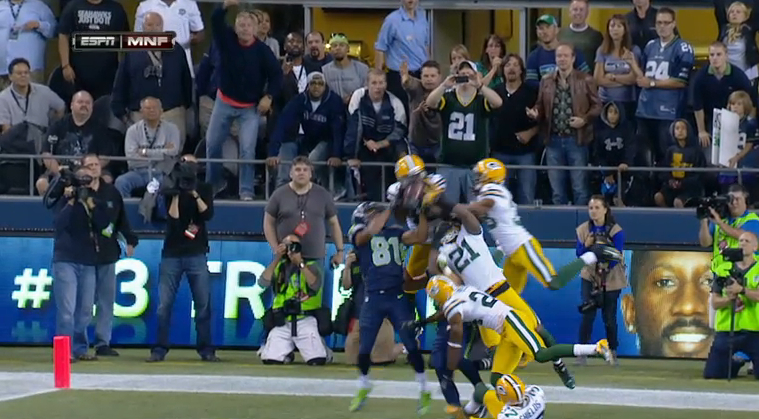 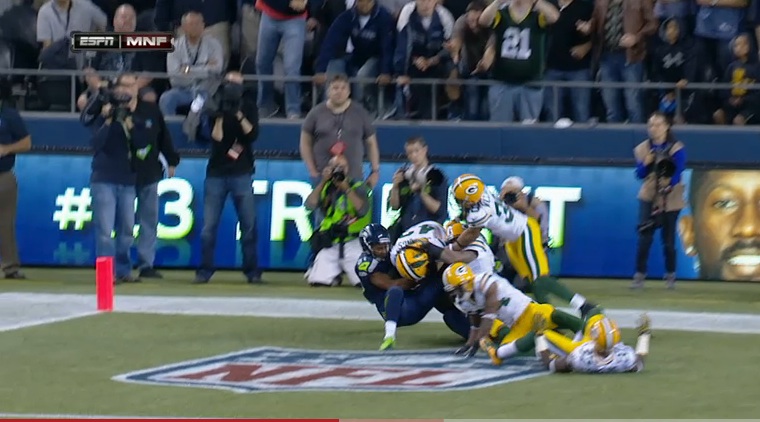 Jennings is pulling the ball towards his chest, a sign he has control of it. Tate is trying to pull it away but this screen shot shows Jennings not only had the ball but is now demonstrating possession by pulling it into his chest. 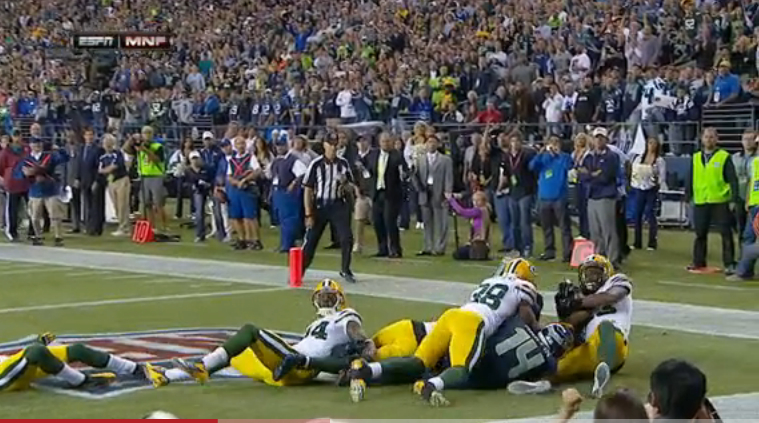 Look at the ball. Who has that? Not Tate. Jennings was pulling the ball into his chest as he came down and now he turns away from Tate and the ball goes with him. Jennings has that ball. Tate is just along for the ride.

One more look. Look at Tate's arms. I mean, c'mon.

Now see it in action:

And a little closer:

Would you be comfortable calling that a touchdown for the Seahawks? These refs were: 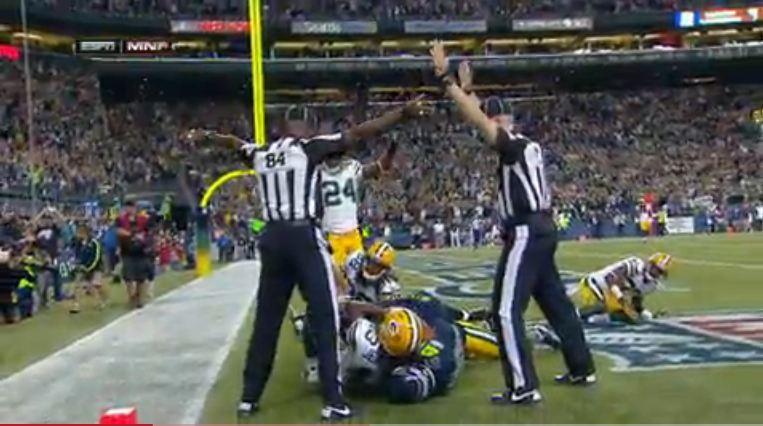 Actually, let me rephrase that. One referee makes a touchdown call. The other one signals for, um, a timeout? Two separate calls two feet away from each other on the biggest play of the only game going of the night. Communication is the most important aspect of a play like this for the referees -- the white hat makes the call but he takes input from the others -- and they completely blew it.

The referees went back to review the play after the fact, leading to a lengthy delay, but I'm not sure what they were reviewing. They can determine whether the ball was caught in bounds and all that but they cannot determine possession via replay. They said it was Tate's touchdown -- well, one of them did at least -- and it wasn't going to change via replay.

This is the kind of screw-up we needed to see. This is big enough -- and it happened to a respected franchise like the Packers -- that the NFL needs to seriously consider ending this lockout. The differences between the two sides is not big enough that you can't go sit down with a federal mediator and hammer it down by lunch today.