These 3 plays from Joe Flacco show why he's so good

The Ravens beat the Browns on Thursday night with another impressive performance from Joe Flacco.

Share All sharing options for: These 3 plays from Joe Flacco show why he's so good

Joe Flacco and the Baltimore Ravens took care of business against the Cleveland Browns on Thursday night, 23-16. The game was closer than it should have been, but that wasn't the fault of Flacco, who turned in another very good performance.

Flacco's improvement from year-to-year has been so much fun to watch and it's to the point where we now expect big games from him. Thursday's game wasn't the best we've seen from Flacco, not by a long shot. But it was a sterling effort; 28-of-46 passes completed, 356 yards with a touchdown on the ground and through the air.

Is he elite? That's a whole other debate -- a debate you can have in the comments section -- but I want to highlight a few throws Flacco made on Thursday night that show us how well he's playing. All three passes come on a four play sequence in the second quarter. Flacco had back-to-back 30-plus yard completions and wrapped it up with a touchdown.

This first one came on an important third down play -- the game was 0-0 at the time -- and Flacco lofted it in the air to Tandon Doss for a beautiful 39-yard gain. This ball seemed to travel a mile straight up in the air before landing perfectly in Doss' lap.

Check out where it lands: 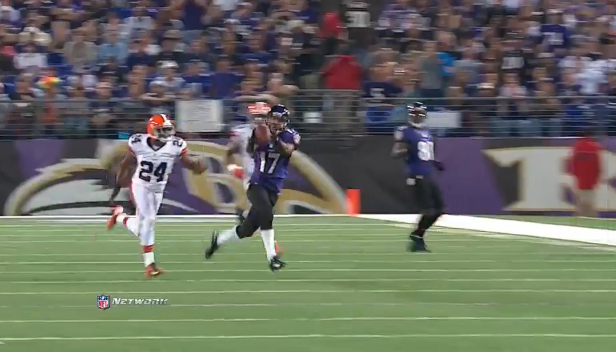 And a different look here: 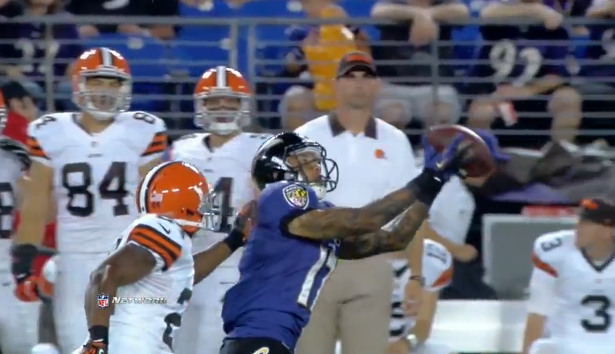 No one's making that catch but Doss. A lot of quarterbacks have big arms, like Flacco does. Not as many quarterbacks have the touch that he puts on this pass. I loved seeing his range of ability because on the very next play he found another receiver for another 30-plus yard completion.

2. He can read a defense

The Browns came out in a Cover 2 on the next play and Flacco read it like a book, finding Torrey Smith in the one soft spot in the defense where he'd be open.

The screen shot below comes 34 yards down the field. Look at where he catches that ball; once again, the spot where no one else can. That's a small area to fit the ball into yet Flacco uses a little bit oomph in his pass and it's right on target. 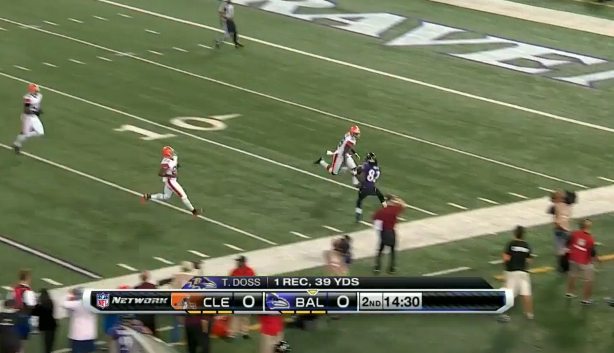 So Flacco can do the touch pass. He can use his head to read a defense and place the ball in the right spot.

Two plays after that pass to Smith on the sidelines, Flacco demonstrated his laser-rocket-arm with this strike to Smith for six.

Three throws that show his versatility very well. I'm fully on the side of the "Flacco doesn't get enough credit" debate. You don't truly enter the elite conversation until you win a Super Bowl and the way Flacco is playing this year that championship may be coming sooner rather than later.