We're back with lines and picks for Week 4 in the NFL, where the refs are back, but the New York Giants are still impossible, Cam Newton's still controversial, and Greg Schiano still has no friends.

Let's get right to it this week. All picks in BOLD.

On a brighter note, the Football Life series on NFL Network is so, so great. So far they've given us documentaries on Ray Lewis and Tom Coughlin, and next week they're doing an entire episode on the 1995 Browns. It runs every Wednesday night on NFL Network, and provides further proof that NFL Films is 10 times better than any other NFL programming on earth. My favorite sequence from the Ray Lewis episode:

1. The scene opens with Ray talking about how he's always promised to be there yelling on the sidelines if he ever has the chance. His son is a running back, and clearly the best player on either team. After he goes untouched for a TD, Ray: "We breed dem, man! We breed dem!"

2. The camera cuts to his son puking on the sideline while Ray screams from 10 feet away. "Get it out. Come on now let's go play! Let's go play. We'll rest tomorrow. Strap it back up!"

3. Cut to Ray Lewis moaning in pain on the sideline during a midseason game, while trainers work on a stinger in his shoulder. A few minutes later a teammate asks him if he's okay: "Hey, look here man, they gotta drag me off here, cuz. I'm good." /drops to field and does pushups.

2. It'd be a lot of fun to have NFL Films compare my football experience to Ray Lewis and his son. Shots of eighth-grade me wheezing in agony after getting destroyed (somehow I was a 140-pound offensive lineman), then cut to my mom rushing over with an inhaler, encouraging me to take the rest of the game off because the pollen count is high. And then my dad in the stands screaming, "We breed dem, man!"

3. There was one time in fifth grade where my police league football team played a team from the inner city. I was one of the youngest, crappiest players on the team, so they put me on the front line of the kick return team to get me some playing time. So as the other kicker was setting up the ball for the opening kickoff, there was a player jumping up and down, waving his arms, and screaming. Cool pregame routine, I thought. And then I noticed he was actually pointing at me over and over again. Maybe a normal football player would point right back at him and dig his heels in, but 11 year-old me just stood there terrified, mulling over the options. I couldn't run off the field, I definitely couldn't hit him, and I could possibly go into the fetal position, but I had to be careful to not make it too obvious. A few seconds later the whistle blew, and a second after that this f***ing nightmare of a sixth grader had literally run right over me, cleats on my chest, just like in the movies. I think there were parents laughing on the sideline as I staggered off the field.

5. Ray Lewis, though? Definitely, definitely built for that shit. Can't wait till Ray Lewis Jr. is in the NFL.

Patriots (-4) at Bills -- Roger Goodell on the fans' backlash this week:

People like Roger Goodell are the worst thing about sports.

Chargers (PK) at Chiefs -- Sometimes I think I'm going crazy when I say that the NFL isn't the same as it used to be and it's all Goodell's fault, but then I read things like this, from Craggs, and it all makes sense.

Panthers (+7) at Falcons -- From my NFL Preview earlier this year:

Cam Newton is basically the real-life Willie Beamon, and I feel like 2012 will be the part of the movie where all the success goes to head and he's filming 10 different commercials before some insane linebacker saws his car in half and he remembers what's really important.

Fast-forward a few weeks, and there's the whole Cam backlash, but just as important, look at this Steve Smith quote:

Smith says he called Newton out so he could "understand this is more than about playing football, it's about becoming a man and understanding this is what it's about."

Isn't that basically the exact same speech LT gives to Willie Beamen in the shower?

If you want to understand Cam this year, remember that he's Willie Beamen with the Sharks in the final few weeks of the AFL season, complete with the the towel over his head and lots of horrible losses. Having said that, we're picking the Panthers this week out of spite for Peter King.

I see where Cam Newton admits no wrongdoing, no weakness, in the wake of his meltdown a week ago. Can't anyone in Carolina teach him something about growing as a person and a player?

Seahawks (-3) at Rams -- Everyone was talking about the refs screwup Monday night, but let's not forget that the Seahawks defense is full of ass-kickers pretty much across the board. How is it possible that the three of the best five defenses in football play in the NFC West? What universe is this?

Dolphins at Cardinals (-6) -- As good as the Cardinals defense has been, I just know that the week I finally pick them to win is the week they finally go back to being the Cardinals. Gambling is evil.

Titans at Texans (-12) -- This might be the most Grantland article ever.

Bengals at Jacksonville (+2.5) -- Hochuli returns! And, uh, I never knew that America was so in love with Ed Hochuli until the past two weeks. My natural instinct is to be annoyed, but then, here's his e-mail to a fan this week:

Thank you very much for your support and for taking the time to write, [name redacted]. And I'll get on the printer about that oversight in our website as soon as I get out of the gym today! Seriously, thanks for your email, but I'm sure a week after we're back, you'll be cursing me again!!!! That's half the fun. :)

All my best, Ed

Redskins (+2.5) at Bucs -- Hey, our first blackout of the season! Did you read Mike Silver on Greg Schiano last week? It's fantastic:

As one veteran NFL coach said of Schiano earlier this week, "It's his way or [expletive] you. He needs to back up a little bit, or he's going to have a very hard time in this league over the long haul." In conversations with nearly a dozen NFL general managers, personnel executives, scouts and coaches familiar with Schiano's time at Rutgers, I detected an almost unprecedented degree of resentment and disdain for a man who has yet to coach his third professional game.

Unprecedented disdain. And remember, this is a league with Bill Belichick, the Harbaugh brothers, Ken Whisenhunt... But Schiano sure sounds like he's a whole 'nother level of awful. His Bucs era has been great so far. Tampa losing close games and crashing the victory formation is becoming a fun weekly tradition.

Giants at Eagles (-1) -- Ah, the New York Giants. Every year they do this. Every single year. It's gotten to the point where picking any Giants game is impossible. Pick against them, and they're guaranteed to look like the best team in football. Pick 'em, and they sleepwalk for three quarters and MAYBE wake up right before the end, just in time to win but not cover.

Even worse: Giants fans are so used to rollercoaster that they just sorta laugh as everyone else freaks out, knowing that after every great game there's probably a clunker coming soon, and after every loss they'll probably look phenomenal a week later. And the ride will probably end with a Super Bowl because hey that's just how things work. AND THEY'RE RIGHT.

The Giants always have injuries, Eli always looks inconsistent, the secondary is always overmatched, and then they always bounce back and dominate just often enough to keep everyone guessing.

There is no expertise involved in picking Giants games. All you can do is hope in one direction or another -- sometimes they're the team that putters around in no-man's land with Eli throwing awful picks and the running game is invisible, sometimes the offense looks unstoppable and Jason Pierre-Paul looks like a chemically engineered hellbeast sent to the NFL to kill everything. Teams like the Giants exist solely to screw with gamblers the world over. We're picking Philly this week just to protest the Giants' bi-polar ways.

In Andy Reid we trust! 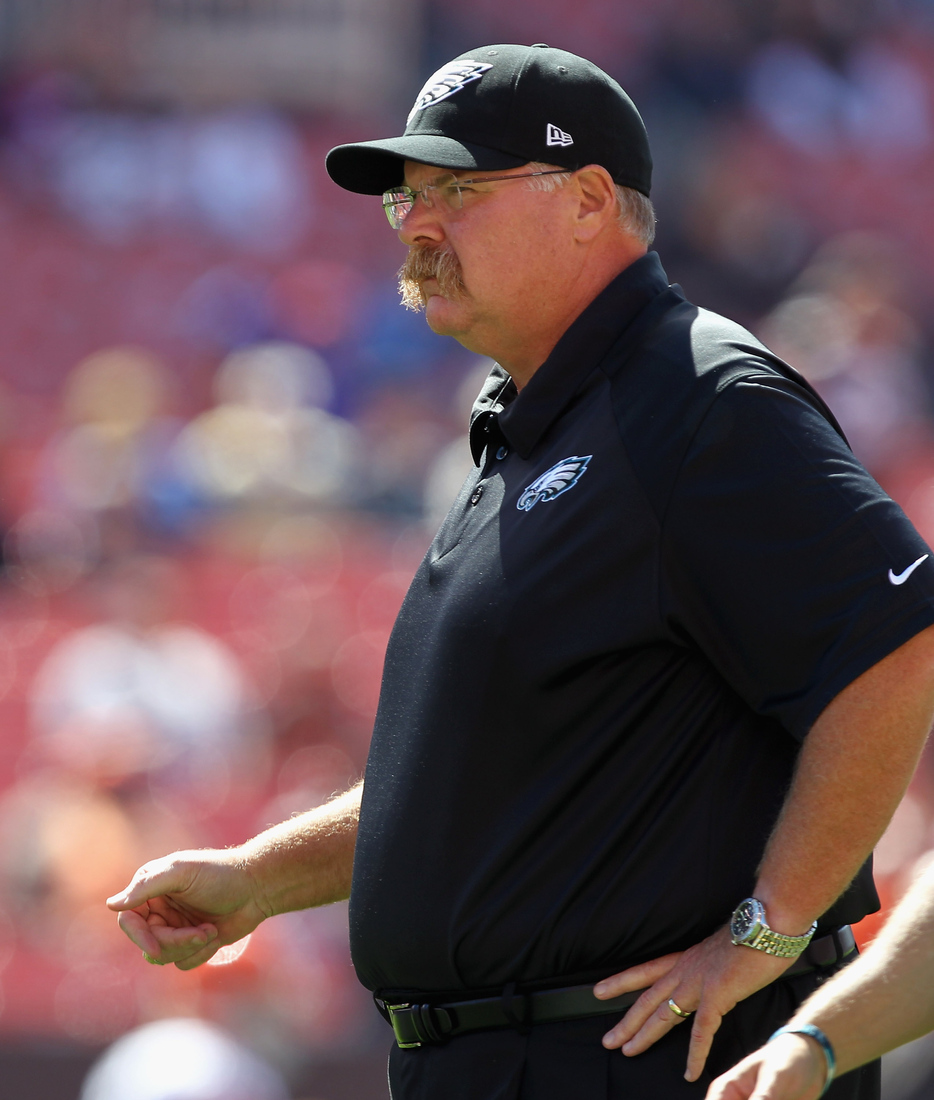 Bears at Cowboys (-3.5) -- Oh man. Just when you thought the end of the replacement refs meant the end of NFL comedy... Tony Romo AND Jay Cutler in prime time? LET'S DO IT.