When them Falcons gon get here: Atlanta unites as it waits

As the Falcons make one more charge into the postseason, the college football capital and transient, diverse Southern hub is finally bonding over its NFL team. This article was originally published in 2013, ahead of the Falcons divisional round game against the Seahawks.

Share All sharing options for: When them Falcons gon get here: Atlanta unites as it waits

He was selling weed, about two hours before the Goodie Mob reunion show, walking beside me in a way that made clear this was an A-okay location for broad-daylight drug sales despite a clogged North Avenue just feet away. I don't smoke, but had to admire the enterprise.

He was wearing a No. 86 Falcons jersey, a regulation dopeboy uniform in fabric color (road white) only, with former possession receiver Brian Finneran's name on the back.

Atlanta is one of the NFL's few majority-black cities, along with Detroit, Baltimore, D.C., on-field archrival New Orleans and possibly St. Louis by now*. The city proper's residents are 54 percent black as of 2010, though that's been dropping over the years as black families move to the suburbs and whites move inside the perimeter, defined as the I-285 loop that surrounds the city. The perimeter is now only the perimeter in a transit sense.

* Apologies if I missed a city. I'll admit I didn't check Green Bay.

Atlanta's arguably the gayest NFL city. Something must be done about our continued slide in these rankings, though still only Seattle and D.C. top us there. When Joey Harrington took over as temporary quarterback in 2007, a portion of Falcons fans swooned.

Atlanta's the NFL city most likely to turn up fans of 31 foreign teams, I'd wager. People move from Wisconsin, Ohio and Buffalo to Atlanta. They don't move from Atlanta to Wisconsin, Ohio and Buffalo. When they come, they bring allegiances with them, then show up at games. So nobody writes pieces like this about braving the Georgia Dome. That's cool -- you underestimate how fun it is to watch disappointed Cowboys fans stream out of your own building.

Racially and otherwise, Atlanta has as wide a range of sports fans as anywhere in the country, maybe anywhere anywhere, plus respectable attendance for its home teams (look it up!) and undeniable college football bona fides.

This has brought to mind one of four things for you: Turner Field going ghost town during the MLB playoffs, Hawks fans sounding outnumbered when the Celtics or Kobe are in town, hockey or that time Falcons fans all rose their voices as one and turned on the team to revere rival convict Michael Vick.

The first is a myth, the second is adorably true and what is hockey?

As for Vick, I was at that game, in a red No. 7 and surrounded by tealy algae-funk green 7s. I bought my ticket the day he joined the Eagles, then rooted for the Falcons along with the far majority of the Dome. Vick scored in the second half of a blowout and got a pop from the crowd. A viral Atlanta soundbite was born.

You need to understand Vick was briefly our Jordan, or more accurately our Elway, since Chicago had had Payton and Butkus and Ditka and Sayers and probably some baseball guys before Jordan. (What is baseball?) We'd had to share Hank and Deion and Dominique and Dale Murphy and most of those 1990s Braves with other cities, and in Vick's first year Chipper hadn't played half his Atlanta career yet. Whom were we supposed to ride for instead of Vick?

For a year or so, he made our insignificant Falcons the country's most exciting and interesting pro team, bringing us within a few plays and a bullshit holding call away of a Super Bowl trip.

That cheer, overstated by people who weren't there as it was, wasn't a betrayal of the Falcons. It was a goodbye to the only reason we'd ever mattered. 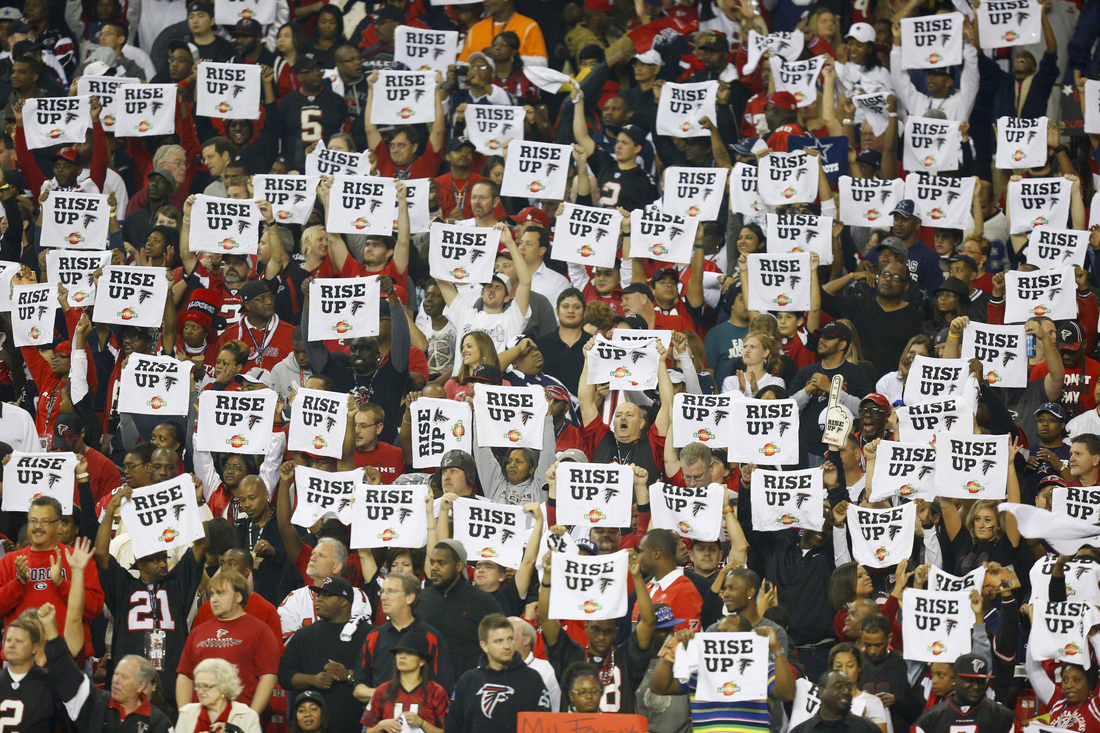 Until the Falcons became something like those '90s Braves, with prolonged success out of nowhere. The Thomas Dimitroff and Mike Smith regime posted back-to-back winning seasons for the first time in franchise history, then made it five in a row. Four of the franchise's 12 all-time playoff trips have come in the last five years, which have included two of our five all-time division titles and two of our three No. 1 seeds. Roddy White, Matt Ryan, Michael Turner and others have already taken over the club record books, and we're not talking about guys who've been here forever.

But, yeah ... '90s Braves. The Birds have also gone 0-3 in the playoffs during this run, becoming the league's most reliable Super Bowl springboard.

It's our golden age. But local gold monitor Trinidad James has to scoff.

We're a musical fan base, and a specific flavor of music.

The 1998 Super Bowl run had a bass soundtrack, T.I's "Bring Em Out" provided the best intros in city history at the height of the Vick years, Big Boi is lobbying for "In The A" to replace that Godsmack-y stuff they play at the Dome now, "Whoomp! There It Is" is still a completely unironic team anthem and James Brown and MC Hammer were Elvis fan Jerry Glanville's sideline mascots.

Considering college football reigned here for more than 70 years before we got any pro team of any kind (save the Atlanta Black Crackers, whose field was once stormed by my hammered, 120-pound great-grandfather) and a full century before any of them got good, I think the Falcons are doing fine.

Especially since nobody is actually from here, as the phrase goes.

As a California native and a white guy who was surrounded by black coworkers while a Falcons wide receiver from 2000 to 2010, Finneran's one kind of textbook Atlantan. He's now a co-host of 680 The Fan's morning show.

"Lord knows I wanna get back to California, when I'm old and gray, to sit on the beach," he says. "But Atlanta is my city. I adopted all the home teams as my teams. It's just one of those places were once you get here, there's no reason to leave."

Nobody settles down in Atlanta quite like black NFL players, whether they play for the Falcons or not, with Finneran listing friends Rodney Harrison, Kordell Stewart and Jamie Dukes among the many who've done so.

"Atlanta is great for young, black professionals," he says about the Falcons using the city's demographics when recruiting free agents. "I definitely think it's a lure."

Finneran's best known outside of Atlanta for two things: the playoff punt block against the Packers in 2002, which sparked Green Bay's first-ever home postseason loss* and his emergence as the sneakiest cheap weapon in Madden history. His 2004 rendition was tall and could jump, the perfect sidekick for that year's virtual Michael Vick, the most unfair video game athlete since Tecmo Bo.

* Of the current Falcons crew's playoff problem, he says, "This is the year they can do it, and it's not gonna be an easy task against Seattle, but this team is loaded. If they're gonna do it, this is the year, and they need to do it. You talk about a must-win for an organization, this is it. A sigh of relief will be breathed around this city if we can come away with this victory."

He describes the Atlanta he arrived in as "a baseball town," attributing Arthur Blank's legit hometown concern (the Falcons are one of the few NFL teams to contractually stipulate multiple community appearances for each player, "from Matt Ryan to practice squad guys," every year) and wins provided by Ryan and Vick for "turning it toward the NFL."

"You build that fan base by having the team winning, and having those players in the community, doing those five or 10 events every year."

Finneran, told of the kid at a rap show wearing a white possession receiver's No. 86 Falcons jersey, says, "Those type of stories, minus the weed part, give me chills. I get tweets from young black males who tell me, 'You were my favorite receiver.' You think people forget about you ... my head doesn't get too big, but it gives me the ability to be proud of things I did and reminds me to be a role model for young adults, white or black."

The two biggest moments from that Goodie Mob show, other than Big Boi rocketing out of nowhere during "Dirty South," were when Pastor Troy performed in a Volunteers jersey a week before Georgia-Tennessee (deemed a confrontational choice during a show that had been one big tribute to Atlanta, until the crowd realized it was a jersey of Eric Berry's, a local) and when a shirtless dude in leather pants and a top hat played Black Sabbath's "Iron Man" through all of "Cell Therapy."

Here we had a paranoid rap song about inescapable poverty and impending global race war performed alongside a chugger by a blues-turned-metal band about a powerful being that finally snaps.

Skinny black dudes in the crowd threw up devil horns and headbanged. I don't know how else to explain it other than it was really, really Atlanta.

And I'd bet there's no major gathering place in America more consistently black-and-white than the Georgia Dome on NFL Sundays.