We're down to the divisional round in the NFL Playoffs, and Tom Brady and the Patriots are heavy favorites in New England this weekend. This means they're in trouble, right?

Things we know to be true: Tom Brady is probably the best quarterback of this generation, Belichick's a grumbling genius, and they put together ridiculous seasons just about every single year. We are in the middle of another of those years. But then all of a sudden--just as they're in the midst of being ridiculous for one more year everyone's getting ready to call them immortal and start measuring them against decades-old history--they go flat and lose to Mark Sanchez, Joe Flacco, or Eli Manning. It makes no sense.

Don't get me wrong, it's GREAT. But it's still pretty incredible.

My completely unscientific explanation: It happens this way because the Patriots are great at beating bad teams, fool everyone into thinking they're great, and we raise our expectations way too high. Even last year's Super Bowl team, which spent most of the year as the "best team in football", didn't beat a single team over .500 until the Ravens in the AFC Championship, who were 7.5-point underdogs and definitely should've beaten them.

None of this makes the recent-years Patriots CLOWNFRAUDS or anything, but I'm just saying: It really shouldn't be surprising to imagine a Patriots loss this weekend. This year's Pats lost 3 of their 4 games against a good NFC West, and then look at their AFC schedule:

To be fair: They looked totally awesome in the three biggest games up there (Broncos, Texans, and Colts). But bookending those STATEMENT GAMES are a whole bunch of routine victories over some phenomenally dysfunctional football teams.

Beating all those horrible teams is a skill in itself, though. That's what the Patriots have mastered, and it's not a given even for great teams. The Giants somehow found a way to blow the NFC East this year, a team like Chargers spent the past decade losing games to bad teams (Norv!), and the Payton/Brees Saints have a 6-10 season every few years just to keep everyone guessing. The Patriots never let that happen.

Even when Brady missed an entire year, they may have missed the playoffs, but they still went 11-5 (the first 11-win team in the history of the 12-team playoff format to miss the playoffs). Belichick always finds a way to make it work. Sprinkle in a few games every year where they take down a hyped opponent in some nationally televised SHOWDOWN, and it's easy to see why we'd gawk at the Patriots after every regular season. They win a few of those big regular season games every year, and beyond that they are great at minimizing turnovers and mistakes and winning games they're supposed to win. They've got it down to a science.

Look at the past 8 years:

... They've also failed to win a Super Bowl in each of those years, which is the only reason we're talking about any of this. So here's what we're saying: Super Bowls or not over the past eight years, the Patriots might be better at executing in the regular season than any team we've ever seen. And lately, it's been pretty misleading.

They've had different problems in different years, but every year it's been the same general story. Belichick and Brady are great enough to compensate for the weaknesses in the regular season against (generally) weak competition, but at some point in the playoffs the holes finally get exposed and the patchwork machine breaks down. Which brings us to Sunday!

Three things that make me feel okay about the Texans: (1) Brady's still the QB who gets noticeably worse when he gets hit, and the Texans pass rush can't possibly be as irrelevant as it was in Week 13. (2) Arian Foster's not going to be held under 50 yards again. (3) As always, nobody on the field can cover Andre Johnson.

More generally: It's supposed to be terrifying to pick Matt Schaub on the road in the playoffs against Tom Brady and a Belichick defense, but remember exactly who we're talking about here. The team that's lost home playoff games to Flacco (2010), Sanchez (2011), and nearly Flacco again last year before they lost to Eli in the Super Bowl. I'm not saying this is science or anything, but wouldn't Schaub fit pretty nicely with that group?

This Dan Shaugnessy column about this week's game was awful and hilarious for a lot of reasons--"The 2012-13 New England Patriots just became the first team in NFL history to get back-to-back byes before advancing to the conference championship game"--but mostly because of the elephant in the room. Has he watched the Patriots the past few years? If Brady and Belichick are going to lose at all in the AFC Playoffs, going down to Houston would be PERFECT.

Onto the rest of the games... 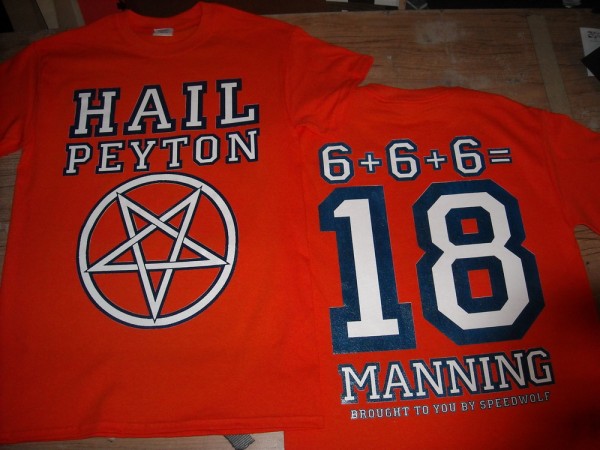 Did you know the Broncos have won 11 games in a row? Because I didn't.

Everyone knows they've been playing well, but DAMN. Obviously part of this goes back to the Patriots discussion--the AFC was really pretty terrible this year--but if we're looking at the big picture, I think the difference between them and the Patriots is that Mile High gives Denver a much bigger advantage, the Denver defense is full of ass kickers, and the Broncos have an interracial receiving duo nicknamed Black and Decker. Of course we're picking the Broncos. PICK: Denver 27, Ravens 13

Since we already discussed the game above ... Let's turn to technology for a second. I still have no idea what CES is--like, a technology version of NBA All-Star Weekend?--but it's been happening this week, and earlier in the week there was a panel on the future of technology starring will.i.am, because of course there was. From The Verge:

"Have you ever thought about the bathroom?" will.i.am asked, recalling a conversation he'd had with a construction contractor. "The mirror should be a camera with a display system. What the fuck do we have mirrors in 2012 for? Why do you have scales in the bathroom? The floor should weigh you."

In the future, will.i.am says, a doctor's appointment will consist of handing your phone over to your physician, who will disappear for 20 minutes and return with a diagnosis: "You're probably sick because your chef's daughter was sick, and then you worked out outside without a jacket. That's why you got a fever. I know because I saw your tweets."

See this is actually pretty terrifying, because he's not the only person who dreams of something like this. Imagine a streamlined future with democratized care and instant solutions, beams someone at a Ted Talk somewhere right this very second. It won't be tweets, either. It'll be text messages and phone records and secret geo-locations you didn't know existed, used to track your every step AND the steps of people you know. Technology's a slow enough boil so that we definitely wouldn't notice if this did ever happen. Imagine someone who's been in a coma since 1997, waking up to find out about Facebook, the incredible new service that tracks everyone you've ever met, collates all your interests, uses facial recognition to track every photo you've ever been in, and then packages it all to advertisers. In 50 years? We could definitely have doctors hacking our iPhones to find out what kind of cold we have.

Then again, will.i.am is fucking crazy.

I changed this pick three times before settling on the Packers and my general rationale here is that Green Bay was so sloppy and inconsistent this season, they're pretty much required by law to win the Super Bowl. PICK: Green Bay 34 San Francisco 20

On Thursday we talked about the Junior Seau news and how we're not that far off from a day where we just stop watching the NFL as much. And without getting into all that here, I just wanted to say that knowing I'll one day stop loving football makes me appreciate this Seahawks team even more. As @straightbangin tweeted last weekend, "The Seahawks show up looking to get gully, and if they happen to play football, so be it."

From Bruce Irvin to Red Bryant to Kam Chancellor to Richard Sherman, the defense scores high with relentless shit talkers AND ass kicking. And that's before you get into Marshawn Lynch, a dreadlocked instrument of death who might be the single most entertaining player in football. Throw in Russell Wilson making plays and Pete Carroll the lost volleyball coach, and it's kinda impossible not to love this team. Especially since I know that someday soon I'm going to feel too gross glorifying a "dreadlocked instrument of death". But we're not there yet!

As for Sunday, everyone focused on RGIII this week and with good reason because that was insane, but it made people forget that the Seahawks scored 24 unanswered points on the road to come back and win a playoff game. That's pretty insane, too.

The Falcons will be ready, especially since so many people think they'll lose this game, and if Julio Jones goes off then Seattle probably doesn't have an answer. Matt Ryan is due for a breakthrough game, the Georgia Dome will be going nuts, Big Boi has already offered some helpful advice, AND if you want to read a great article today, check out Jason Kirk's look at the Falcons and the city of Atlanta. There are a lot of things working in ATL's favor here. But screw it, we're rolling with the Seahawks. Because they've been way too much fun this year and I'm gonna keep rooting for them at least one more week. 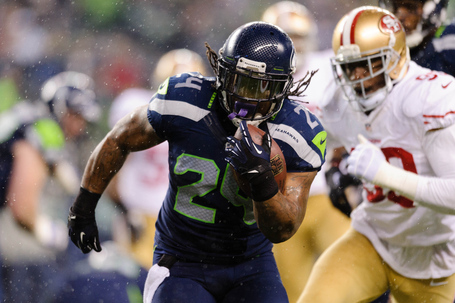