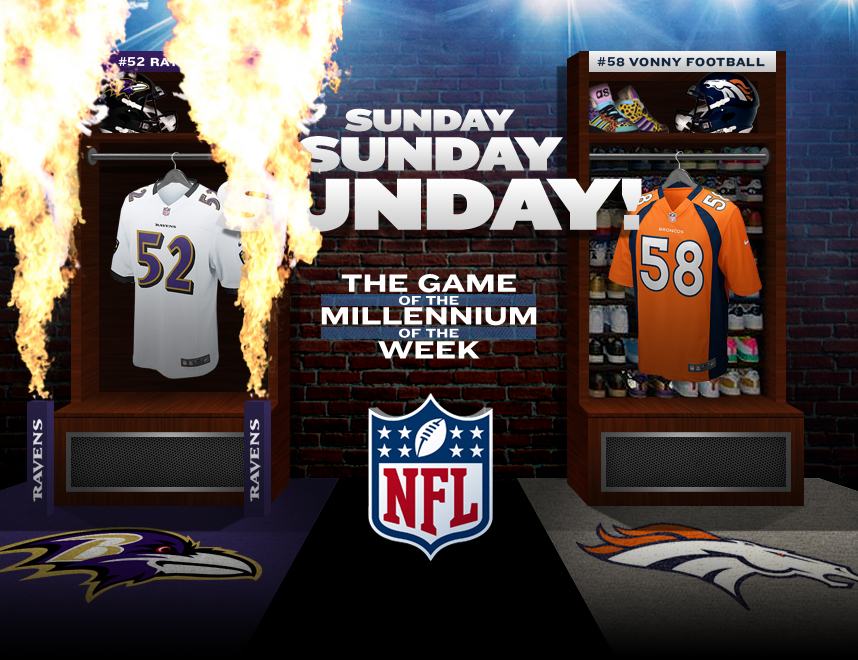 Champ Bailey, Ray Lewis, Peyton Manning, Ed Reed ... this weekend's game between the Baltimore Ravens and the Denver Broncos is filled with future Hall of Famers, some of the best veterans playing football right now. There are more than just old folks playing football in this game. Exciting young players like Von Miller and Ray Rice round out an all-star cast. Still, this game belongs to the olds.

Contrary to popular belief, facing your own mortality is not the worst part about aging. It's the long list of inconvenient changes getting older forces on you. Peyton Manning is a long way from using handles to sit down on the toilet. Ed Reed probably doesn't drink Metamucil each night. But in football years, these guys are all nearing the end. Ray Lewis is retiring after the season. Reed flirted with retirement last year. Manning looks like the only one that could still be around two seasons from now, thanks to his bionic neck and updated circuitry.

Soak it in. This is the last time that you will see these guys on the field together for a single game, in a game that matters even.

These two teams met earlier this season, in Week 15. The Broncos handled a struggling Ravens team by a final score of 34-17. It was 17-0 at the half. Peyton Manning only had to throw one touchdown pass in the whole game.

That was a different Ravens team, slightly. It was Jim Caldwell's first game as offensive coordinator after he replaced the ousted Cam Cameron. Baltimore's offense improved after that game, scoring 33 points and ending the Giants' playoff hopes the next week. The Ravens were also dealing with injuries in Week 15, including Ray Lewis, Bernard Pollard and Dennis Pitta. Lewis' pre-game pep talks alone are known to add roughly three points to any spread.

The Broncos are the same Broncos team that finished the season with 11 straight wins. Seven points was the closest margin in any of those games. An easy schedule and the relative ease with which Manning, Miller and the Broncos handled it have forced them under the radar, in as much as a team with Peyton Manning can fly that low to the ground.

That will all change this week. John Harbaugh's team should be a tougher obstacle for the Broncos this week, and people will wonder what impact a bye had on Denver's momentum. Nevertheless, the Broncos will win this one. Expect to hear plenty about Manning et al after that, especially if they get a conference championship date with the Patriots and the AFC's month of old heroes continues.

He's not as bad as you think! No, he's never quite as good as you hope, but guess what haters, Lee Evans isn't here to screw things up in 2013! So maybe it will be somebody else this year.

I was traveling last week and missed the Ravens game, but I'm sure there was plenty of insufferable Ray Lewis coverage. And I'm sure this week will be no different. But lest you get lost in it all, read this and remember that he's pretty much perfect as a football player.

With Ray Lewis retiring it's natural to wonder if Ed Reed's going to as well, but that's insane, because Ed Reed will play football forever. I'm not even sure he can run anymore, but he'll still have at least one interception this weekend.

Look, the only explanation for Manning's resurgence this season is that it was decreed by the Kanye and Tagliabue and Thomas Jefferson the rest of the Free Masons that manipulate our reality. The truth's hiding in plain sight, and sorry Baltimore, but Joe Flacco sure as shit isn't Illuminati.*

BLACK AND DECKER, Black and Decker

As explained here, we are all cheering for the Broncos this weekend. Word to Jesse Ventura and Willie Mays Hayes.

The city of Denver has the stadium it deserves: a functional, clean, and well run series of concrete encrusted bleachers topped with a melted halo of steel mimicking the rise of the Rockies in the distance. That ring may also look like a malformed pancake, another fitting metaphor since the general reviews of Sports Authority Stadium insist it's not the prettiest thing ever, but it's still tasty and gets the job done.

Standard caveats for most pro stadiums apply: parking is a nightmare, the space itself is devoid of personality, and yes, you have to pay money for things. Light rail does go straight to the stadium, though, and the food and beer is lauded for value, especially relative to other faceless NFL barns. As for paying for things, well…a reviewer described the bathrooms as "not totally covered in piss," and that's a rave for a public stadium anywhere, really. 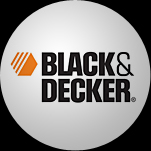 A year ago in the playoffs, Demaryius Thomas caught an 80-yard touchdown pass from Tim Tebow to beat the Steelers. In that same game, Eric Decker hurt his knee and missed the loss to the Patriots. How things change in a year. Now, Decker and Thomas (or as they like to be called, “Black and Decker”) are both 1,000-plus-yard receivers thanks to Peyton Manning. (Insert Tim Tebow joke.) Decker exploded for eight receptions, one touchdown and 133 yards in December’s victory over the Ravens. Manning will need both of them to be his reliable power tools to help win his 10th straight game against Baltimore. 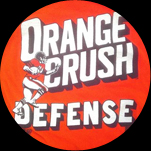 No, not the beverage and definitely not R.E.M.'s 1988 song of the same name. The Broncos defenses of the late 70's went by that nickname and the current Denver defense has done well to inherit that nickname. It begins (but doesn't end) with linebacker Von Miller. After an impressive 11.5 sacks and an AP Defensive Rookie of the Year award in 2011, Miller didn't experience any sophomore slump in 2012, ending the regular season with 18.5 sacks. He has 30 sacks in 31 career games. Even with Manning's great comeback season, Miller has been just as impressive. 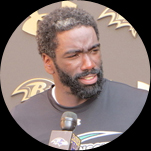 Damn Kids, Get Off My Lawn!

Only in football is a 30-year old dude considered old but that's the case with the Ravens who will line up Ray Lewis (37), Ed Reed (34) and Terrell Suggs (30). Ray Lewis will be unable to walk when his career is over due to those gyrations of his when he enters the stadium while Terrell Suggs will be feeling it after his career is over because Achilles' tendons aren't meant to bend like that. And then there's Ed Reed who is just OLD. Look at that picture. That's either Ed Reed or a 63-year old man. One of the two. All that said, these old dudes are still extremely productive on the field. They're just old. 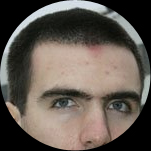 Joe Flacco will walk onto the field on Saturday and there will be no doubt in anyone's mind in that entire stadium that he is the best player on the field with a unibrow. It's not even close. Among unibrow-wearers, he's elite. From Liam and Noel Gallagher of Oasis to Bert from Bert and Ernie to a young George Bush Jr., we've seen plenty of folks try out the unibrow. But I love the moxie we see from Flacco with his unibrow. It takes a strong person to pull off the unibrow. I commend Flacco for realizing that sometimes in life a simple mustache won't do it. Sometimes you need more. Sometimes you need to be different. The unibrow. 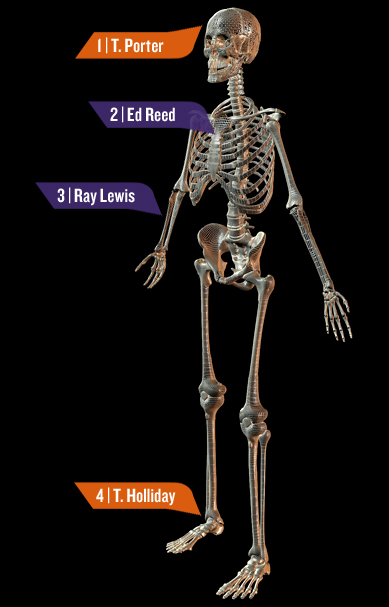 It's Week 17 and the Broncos have one guy who missed practice. Same with the Ravens. What's up with healthy teams playing into January?

Say what you want about how old he is (37), but Ray Lewis played in every snap last week against the Colts -- and had a team-high 13 tackles -- after not seeing the field since October 14. Not bad for an old dude.

He'll play because he's shooting for a perfect season. Holliday was with the Texans for the first five games -- they won all five -- before heading to Denver where he's won 11 in a row. 19-0 is on the way. 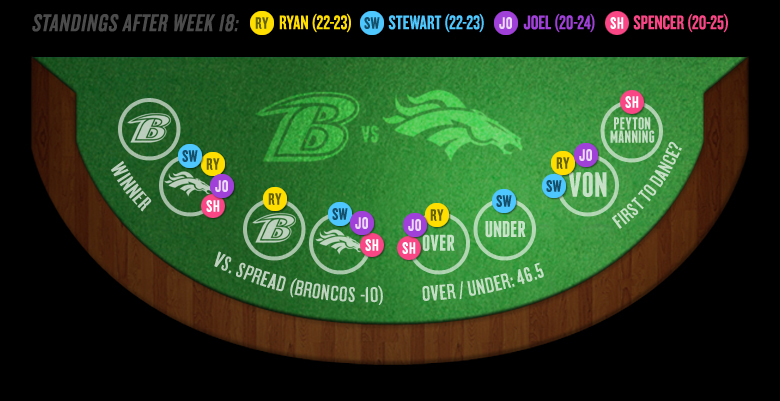 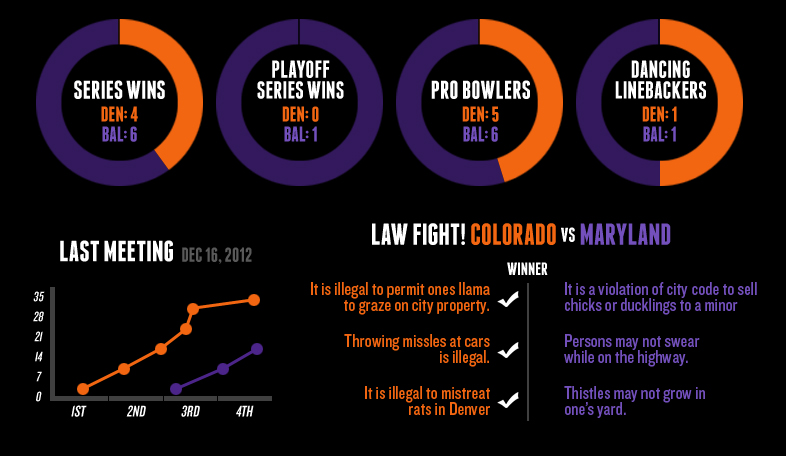 If I had to choose Peyton Manning, Adrian Peterson or Aaron Rodgers for MVP I would Choose Tom Brady.

Ray Lewis looks even scarier with a bionic arm.

If a Broncos player pees in the woods, the Broncos' website will get it on video: http://deadsp.in/w6IK4xV