NFL year in review: The five biggest stories from 2012

Not even comets move as fast as the NFL. Here's a look back at the stories that shaped America's most popular sport this year.

Share All sharing options for: NFL year in review: The five biggest stories from 2012

Another year is winding down, and it's been a pretty good one for professional football and the fans. SB Nation spent a little time this week recapping the year that was. On Thursday, the NFL bloggers presented their awards for the season. Without further ado, my picks for the five biggest stories in the NFL for 2012.

The Year of Rookie

The conversation over who should get the NFL's Offensive Rookie of the Year Award is, at times, a heated one. Rightfully so. There are three quarterbacks playing outstanding football, as good as any veteran in the league this season. RGIII, Andrew Luck and Russell Wilson aren't the only rookies playing a leading role on their teams right now. The draft class of 2012 might well be remembered as the most gifted group of players to enter the league in a decade or more.

It seems like this year, more than ever, teams are relying on their rookie class to be essential contributors on the field. Besides Wilson, Seattle's had big contributions from linebacker Bobby Wagner and defensive end Bruce Irvin. The Browns owe a slightly improved record to players like Trent Richardson and Josh Gordon. Doug Martin has helped revive Tampa Bay's offense. Janoris Jenkins is the Rams' second-leading scorer; he's a cornerback.

More and more of the league's teams have finally come to the realization that drafting well, through all seven rounds, matters. Sick of losing, owners of downtrodden teams lured a new generation of executives away from places like Atlanta, Baltimore and Pittsburgh, organizations that have always understood the value of the draft. Front offices have invested smarter in scouting departments. Coaches have found ways to put young players in a position to succeed, tailoring schemes to fit the talent rather than the putting square pegs in round holes. 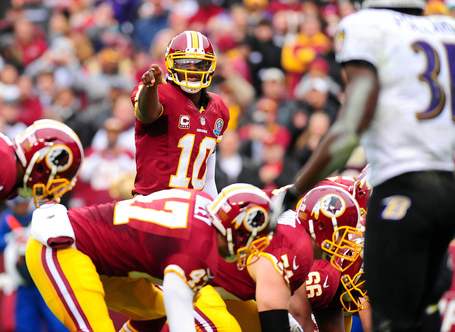 The Limits of Power

On a Friday afternoon in March, the NFL dropped a bombshell. After years of investigations, the league found players and coaches from the New Orleans Saints had conducted a pay-for-performance program aimed at injuring opposing players. The New Orleans Saints bounty scandal came to an end, sort of, in December. After months of legal wrangling, a final appeal to former commissioner Paul Tagliabue vacated the suspensions of the four players indicted by the NFL.

The whole thing was handled poorly from the start, giving it the look of a show trial that the Committee of Public Safety might have conducted standing next to the guillotine. Mysterious evidence, poorly defined roles, hidden testimony, it was abortion of due process under the auspices of player safety and the integrity of the game.

Player safety and keeping the game competitive sounded fine until the NFL tried to bring in a gaggle of junior college and high school referees to replace its experienced cadre of on-field officials. It took a few weeks and a historically bad call in Seattle, but fans finally smelled the rat. The NFL cared deeply about player safety and the integrity of the game, until the opportunity to save a few buck on the pension plan presented itself.

Dueling narratives from the cases collided, and fans saw the contradiction. As Andrew Sharp noted in December, player safety and a competitive enterprise are cloudy goals, at best. The NFL tried to reap some benefit for itself from both instances -- a PR win from the bounty case and financial one from the referee fiasco -- at the expense of its employees. It will be harder for the league and its owners to do that in the future. 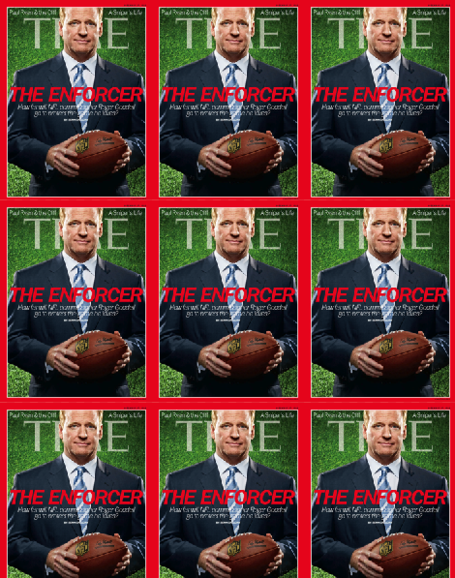 This year was a particularly good one to be in the stadium construction business. Work began on a new home for the 49ers in Santa Clara, Calif. Lobbying from Roger Goodell himself revived the Vikings stadium project in the Minnesota legislature. It passed in May, just under the deadline. In December, the Bills worked out a new lease and renovations for Ralph Wilson Stadium.

Building a billion dollar football temple is no easy task. It takes a hefty commitment from the cities, counties and states to make it happen. According to a Dec. 20 report from Bloomberg, public coffers have kicked in $18.2 billion since 1992 to fund the NFL's 32 stadiums. That number includes everything from construction costs to generous tax subsidies. All the while, profits continue to flow to the NFL and its 32 teams. A year ago the NFL signed new television deals with CBS, Fox and NBC worth $27.9 billion. Starting in 2014, the NFL will collect about $6 billion per year from all of its broadcast deals.

Meanwhile, local and state governments are making tough choices about the future. Oakland laid off hundreds of police officers but left its $17 million payment for the Raiders' home intact. You don't have to look very far to find an economist willing to dispute the promised benefits of stadium construction.

The public isn't being forced into these deals, per se. No matter how obnoxious Zygi Wilf's veiled threat to move the Vikings was -- the New Jersey resident parked his private plane in L.A. during the legislature's pitched debate -- the public is making these choices via elected leaders.

State and local taxpayers in Atlanta and St. Louis, as well as other places, are going to be asked to make stadium decisions in the near future. Considering the opportunity costs of investing in a stadium, those communities should demand more for their dollars.

NFL teams seeking public dollars should be required to open the books. It also shouldn't cost residents and fans a small fortune to take their family to a game, not when these are the same people subsidizing a very profitable business. Fans can choose stay home and watch the games in their living rooms, something that will make them far less likely to spend big on stadiums.

NFL writers will have to find new hooks soon, maybe. Truck stop magnate Jimmy Haslam joined the fraternity of NFL owners this year when he purchased the Cleveland Browns from Randy Lerner. The Browns have given fans a hard legacy. After finally getting its team back in 1999, Cleveland has experienced exactly two winning seasons.

Haslam fits with the new breed of owners being let into one of the country's most exclusive clubs of mostly rich white guys. He has a competitive streak and experience hiring the right people to run his enterprise.

At the October owners meeting Haslam explained the basics of his approach, hard work and accountability:

"We're going to be involved, but involved in the proper way. I had five people that reported to me at Pilot Flying J. They're all smarter than I am and they're all better at their role than I am, and we let them do their jobs. On the other hand, we question them, we push them, we challenge them, we hold them accountable."

Team president Mike Holmgren is out already. Head coach Pat Shurmur and GM Tom Heckert were fired Monday. Joe Banner, recently of the Eagles, took over the day-to-day operations of the front office, promising wholesale changes to the culture there.

Hiring a new coach and general manager will be the first big test for the Haslam's Browns. The results of that process will reveal whether Haslam's promise of hard work and accountability are real or just more of the same. Listening to him that day in Chicago, I left convinced that the NFL isn't going to have the Browns to kick around anymore. 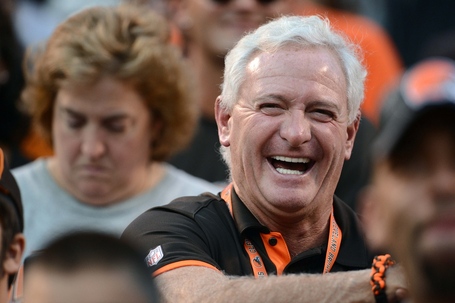 A Season of Greatness

Every NFL season turns out to be a pretty good one. The league has hit on a winning formula with a revenue model that drives parity and the right amount of teams to keep the talent pool of players well stocked. But something seems different about this year.

Peyton Manning returned to the league, and looked much like the player we remember, one of the greatest quarterbacks to play the game. Adrian Peterson recovered from a torn ACL to carry the Vikings on a playoff run and flirt with the rushing record in at time when running backs are more accessory than necessity. Calvin Johnson is 108 yard away from becoming the first player in NFL history with 2,000 receiving yards. Drew Brees surpassed Johnny Unitas' 50-year-old record for consecutive games with a touchdown pass.

These are not small milestones, not among the NFL's endless list of records that seem to fall each and every week. Peterson, Megatron, Brees, Manning ... these are the kinds of players that appear once a generation and they're all hitting their plateau at the same time. This might just be the golden age of the NFL. Enjoy it.