TROLL TUESDAY: A game full of gimmicks, and one Ray of hope

The Baltimore Ravens are back in the Super Bowl, and it's all thanks to Ray Lewis, the middle linebacker who's taking football back to its roots. Bear witness, America.

Share All sharing options for: TROLL TUESDAY: A game full of gimmicks, and one Ray of hope

Rather than wait for columnists to bait readers into blind Internet anger, we at SB Nation believe in setting the curve ourselves and doing so honestly. On Troll Tuesdays, we attempt to construct the most obnoxious column on earth. Today: Let's talk about cheap gimmicks.

Owings Mill, MD -- Football used to mean something. A game that gave the rest of us a playbook for how to do something great. Eleven men lining up together to knock someone in the mouth. Eleven men locking arms to become something bigger and better.

That's what football used to be.

And sure, I'll admit they impressed me with their numbers for much of the year, but I wasn't surprised when it came crashing down. The Patriots have been winning with a gimmick offense for the past few years. A bunch of no-huddle hurry-up plays with five wide receivers, two tight-ends. It's all exciting and they win this way in the regular season, but maybe it shouldn't be surprising that they can't win the big one.

It's not just a Patriots problem, either. The whole league looks like this these days. First it was the Wildcat, and everyone needed their playbook to get a little more "dynamic." Then the Pistol, where every quarterback becomes a running back. Then we all decided to stop huddling. Gotta keep the other team on their toes, the analysts say.

What ever happened to hitting someone in the mouth?

Keep the other team on their backs, you know?

Put their toes to the sky.

Every year there's a new gimmick out there and a hundred people with their hands out, looking for a shortcut to success. The fads take over the NFL like a viral video. Five receiver sets, two tight-ends, pistols, wildcats ... and no back bone. Ask Matt Ryan, the Patriots, or Manti Te'o.

You can only fool the world with smoke and mirrors for so long.

But while society's biggest problem stared us in the face all week long and twice on Sunday, we saw the solution standing on the podium Sunday night. Because at the end of the day, Ray Lewis just wasn't ready to go home this weekend. He's too righteous to leave the game in the wrong hands. By the end, he couldn't help but break into tears. 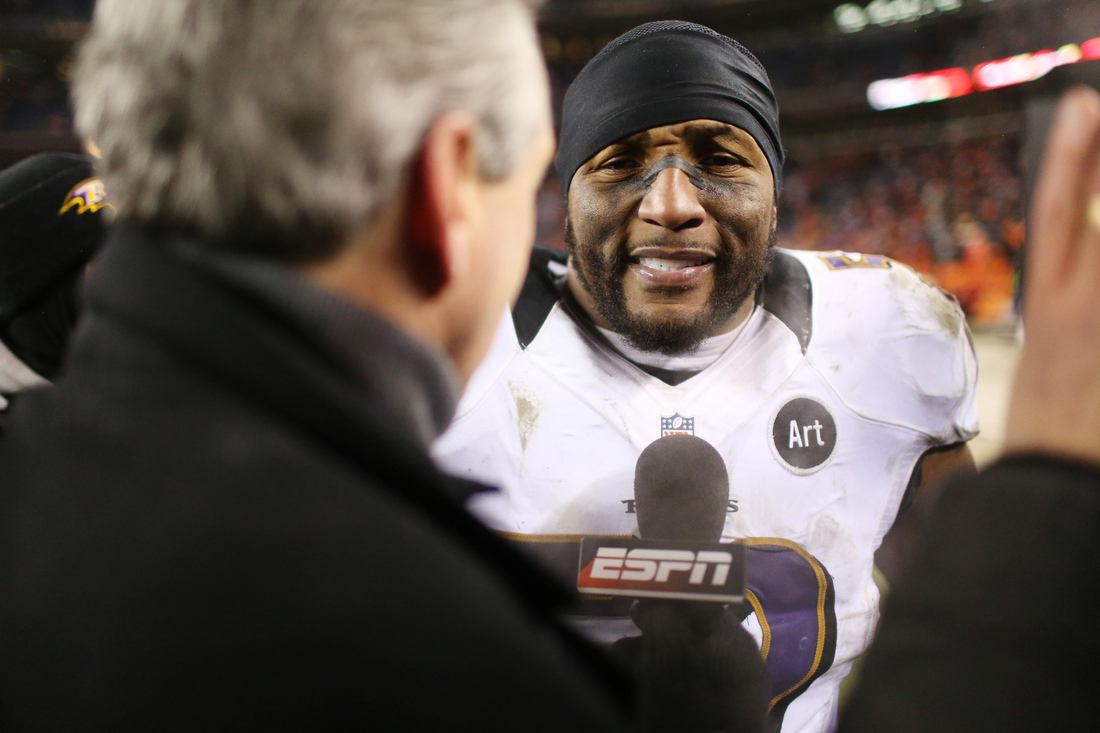 Did you see him bear hug his owner afterward? It was so refreshing to see a star reach out and put his arms around the guy who made it all possible. The game is a gift for these players, and Righteous Ray is just grateful for the opportunity Steve Biscotti gave him.

A millionaire athlete who says "Thank you."

Righteous Ray understands what it's all about. He's been through a thousand trials in his Football Life, but he's survived because he never stopped believing. Not just believing in himself and his teammates, but believing in something bigger. Something better.

When is a game more than a game?

When a guy like Righteous Ray makes us believers, too.

Every Sunday he's told us that God has put him and his teammates on a mission, and at this point, who are we to argue? The results speak for themselves. With Lewis in the middle of it all, Baltimore's had Hail Marys answered over and over again, they just beat the two best quarterbacks of the 21st Century. It's been remarkable to watch.

All it took was a little Old Testament brimstone to bring football back to its roots.

While the rest of the sports world falls in love with imaginary girlfriends and viral video offenses, Lewis is the middle linebacker who keeps it simple. You can spread out all the receivers in the world, but Righteous Ray's engine only has one gear and it's called HIT.

Now Baltimore's back in the Big Game, and as the media dissects every story and every character over the next two weeks, I'm sure they'll go after Ray and bring up his past. Of course they will. Negativity equals clicks these days. And don't get me wrong; I'm a columnist, I understand what it means to be skeptical. But sometimes it's important to savor a good story.

So while the peanut gallery preaches about the past, how 'bout we all bear witness to what Righteous Ray is doing in the present. His only gimmick is belief. In a culture where everyone's looking to copy something new, shouldn't we take notes from the old school brawler who's still standing?

Because here's what we know right now: Football may look like a video game these days, but we're watching the one football player left that John Madden might actually want on his team. A man who takes football back to its roots one win at a time, saying thank you every Sunday. We're watching a man win big with what's worked all along.

Who knows where the story goes from here, but if you want to talk about the past, I can tell you this much: Ray Lewis wasn't the only one getting choked up on Sunday.