The Seismograph: Did we see the Harbowl coming?

In this edition of The Seismograph, we look back at what SB Nation commenters have said about the "Harbowl" over the last year, and how quickly we've grown absolutely sick of it.

Share All sharing options for: The Seismograph: Did we see the Harbowl coming?

Semantic satiation (also semantic saturation) is a psychological phenomenon in which repetition causes a word or phrase to temporarily lose meaning for the listener, who then processes the speech as repeated meaningless sounds.

this week and the next might be rather tough on you. The days preceding every Super Bowl always are, and you know it. I know you know it, because I searched every single SB Nation team blog for mentions of "Harbowl" over the last year. A lot of you are looking forward to the prospect of Jim Harbaugh coaching his 49ers against John Harbaugh's Ravens.

More of you are dreading it. I've chronicled my findings in the graph below. I did this by reviewing each comment I found, and assigning it a score between negative-10 (hate) and 10 (love).

(Note: I actually counted results for every SB Nation blog except for our 49ers blog, Niners Nation, and our Ravens blog, Baltimore Beatdown. I'll get to them later. For now, I want to hear from the impartial observers.) 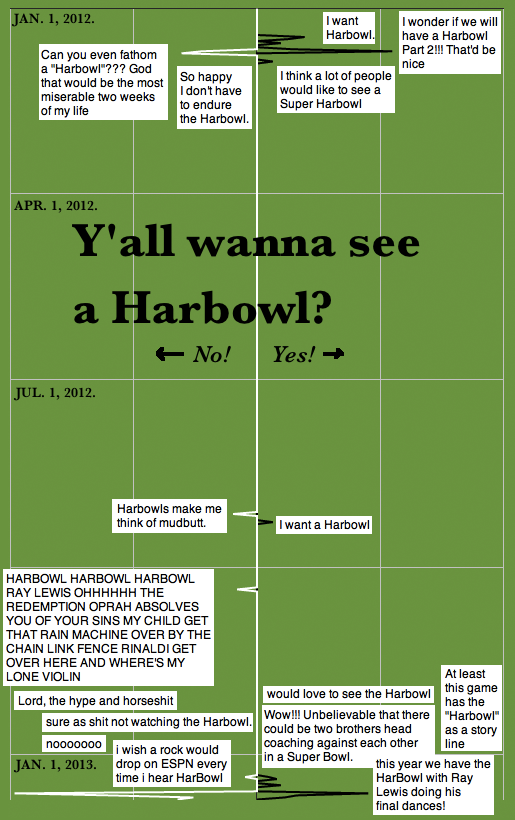 The Ravens-49ers game of November 24th, 2011, was christened the first-ever Harbowl. The following January, when both teams reached their respective conference championships, a Super Harbowl was a very likely possibility. It was not to be, but as you can see, most of us were excited.

Gaw, those positive comments, though! "Wow!!!" "This year we have the HarBowl with Ray Lewis doing his final dances!" They're so goddang precious I could just melt. I want to hug those people.

Now, let's visit our Niners and Ravens blog. As someone whose team (Chiefs) has not reached the Super Bowl since I was born, I don't really know what it's like to think, "I think my team might go to the Super Bowl," with any degree of confidence.

As fans of a team who stopped one win short of the Super Bowl last year, the folks at Niners Nation certainly had reason to be confident. Super Bowl talk began to swell once Colin Kaepernick took over at quarterback and pieced together consecutive wins ... 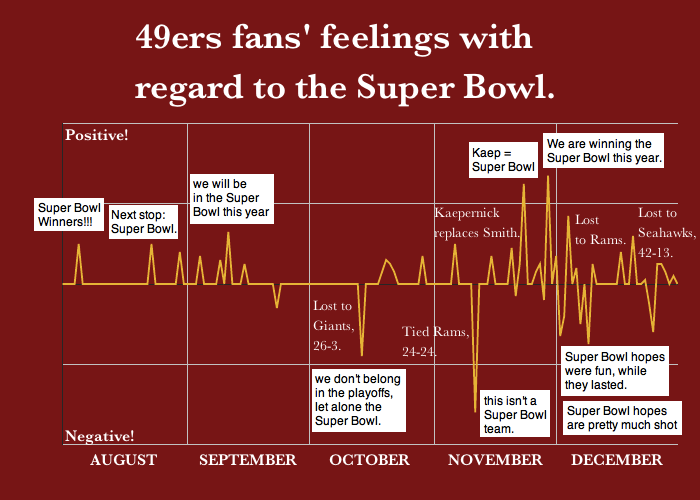 ... but in December, the Niners sustained a couple of rough losses, including a 42-13 decimating at the hands of the Seahawks. For every Niners Nation commenter talking Super Bowl, there were two or three declaring the cause lost.

Also interesting -- the greatest spike of negativity was thanks to a tie, not a loss. After tying the Rams on Nov. 11, the 49ers were still in fine shape and sported a 6-2-1 record. One crummy, anticlimactic game was enough to sour a lot of fans on Super Bowl hopes.

On to our Ravens blog, Baltimore Beatdown. There wasn't quite as much Super Bowl talk in the comments, but confidence did swell following a 48-17 preseason crushing of the Jaguars. 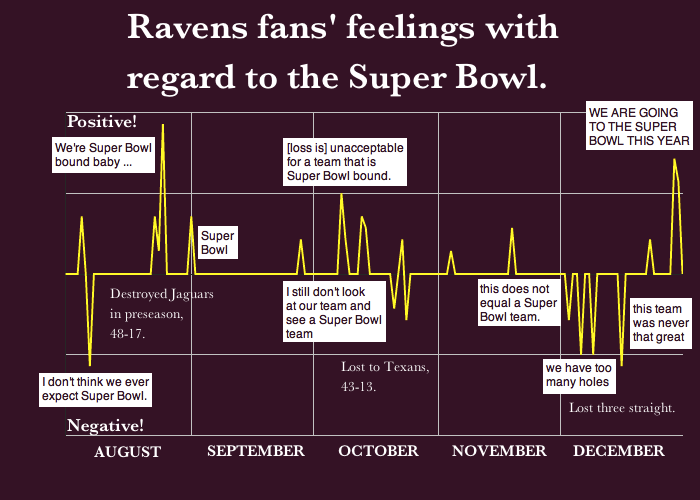 Super Bowl hopes were rather stable until December, when the Ravens dropped four of their last five regular-season games. "This team was never that great." I saw a lot of comments like that in December.

But after three playoff wins, including an victory over the Broncos that stands as one of the most memorable playoff games in recent memory, the Ravens are here. I think the commenter from Sept. 1 said it best: