You don't have to go out to have a good time in New Orleans: The SB Nation video team stayed in on Tuesday night to eat nine pounds of crawfish and two dozen blue crabs.

Share All sharing options for: Gnawlins: the traditional crab and crawfish boil

In lieu of hotel rooms, SB Nation's Super Bowl video team rented a big house on Esplanade Avenue. It's on the wrong side of I-10 in the 7th Ward, but it's spacious, stately and comfortable (if slightly dilapidated). Eight of us are spread across five bedrooms, and two more sleep in the guest house out back. A small courtyard separates the two buildings and serves as our most common gathering area, and it was there that I was sitting there and typing when Ed showed up at the gate. He had an unruly beard and a white t-shirt that couldn't hide the stomach of a man who lives and eats in New Orleans. "How y'all doin'? I'm here to cook y'all your seafood feast."

Ed Nicholas isn't a chef. He has no formal culinary training. He doesn't even work in the restaurant industry: He's employed at the Domino sugar refinery just east of the city. But he boils crabs and crawfish the way people like it done, and after years of being told he should go get paid to throw "seafood feasts," in 2010 he went into business to do just that.

I know this because Ed, like most New Orleans natives, has an easy warmth that encourages conversation. He has pride in what he does, but his chief goal, if you show some curiosity, is to be informative. He explained the technique for crab-fishing, how they're sorted into three sizes on the dock (No. 1s are largest), and how some are shipped to Baltimore because the Chesapeake region fetches a better price.

Ed buys direct from the fishermen, he told us, then related a prolific day for his go-to guy. "Dey go out 4 a.m., come back 'round noon with 4,500 pounds of crab." He whipped out his phone and scrolled through a gallery of a skiff overflowing with blue crab. 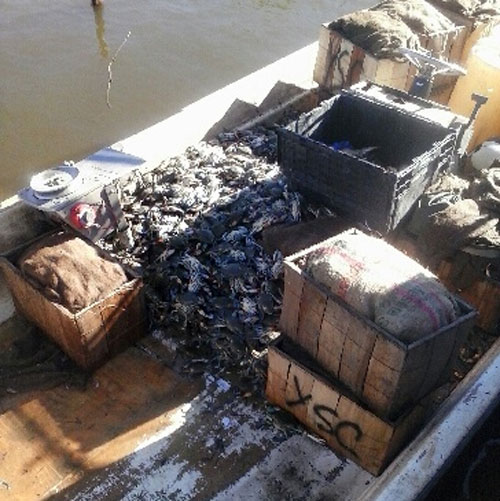 The skiff didn't look like it needed a large crew, and the math of the man-hours started weighing in my mind. "Wait, so they caught five hundred pounds of crab an hour for eight hours?"

"And how much do they sell the crabs for?"

I estimated and rounded. "So nine thousand dollars for eight hours' work?"

"Is that an unusual day?"

"Oh yeah. Some days you go out, only come back with three boxes." Three hundred pounds times a dollar-fifty was much easier math, and less fun to talk about. 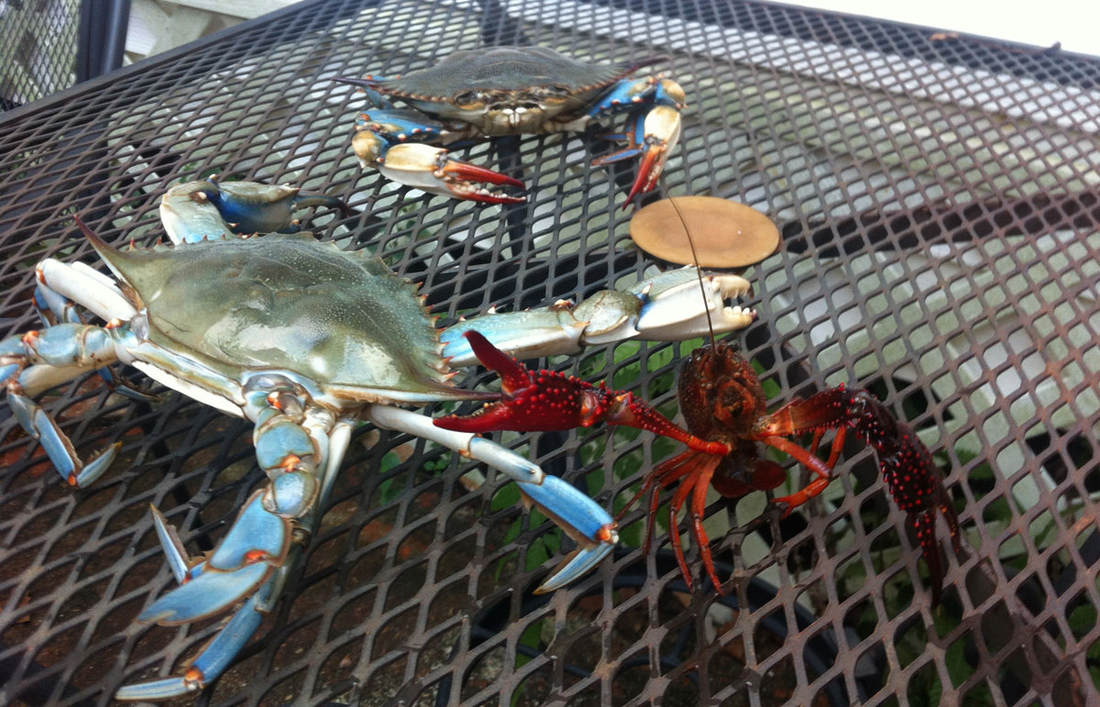 Ed also delighted in showing us the living versions of our dinner. The crabs had clung to the table in desperation, and the crawfish gaped at me with pleading maxillae. It was hard not to feel a twinge of sympathy for the creatures in their final helpless minutes. Boiled alive is a terrible way to go, even if it makes you super-delicious. But whether you're boiled and eaten or done in by heart disease and diabetes from dietary excess, death comes for us all. It is better to look it in the face.

The sympathy ended when nine pounds of crawfish and two dozen crabs were dumped in front of us, along with the traditional sides: corn on the cob, boiled potatoes and sausage. For good (and unnecessary) measure, Ed also provided a platter of fried shrimp and fried chicken, plus potato salad.

Drew Magary of Deadspin and GQ recently opined that blue crab isn't worth the effort to break open for the paltry amount of meat you get. He's not wrong, per se (as a child of the Pacific Northwest, I prefer the bounty of dungeness), but that mindset is a touch too cynical for New Orleans. With a group of friends around an outdoor table covered in newspaper, the effort of tearing apart keratin armor and clearing away gills and viscera is as essential to the meal as the flavors themselves.

We cracked claws with our teeth, ripped tails from bodies, and sucked salty liquid guts from carapaces until our fingers were wrinkled with saltwater and our bellies protruded in blissful agony. With no utensils to guide decorum, we tore apart shells until the discard piles grew larger than the shrinking islands of uneaten crustaceans. The sound of jazz wandered through the warm night air, and condensation collected on our beer bottles.

"This is the best night of my life," said one of our producers, and it didn't sound like hyperbole.