Adrian Peterson and the Vikings travel to Lambeau Field to play the Packers in the Wild Card round of the NFL playoffs. It's the game of the millennium ... of the week! 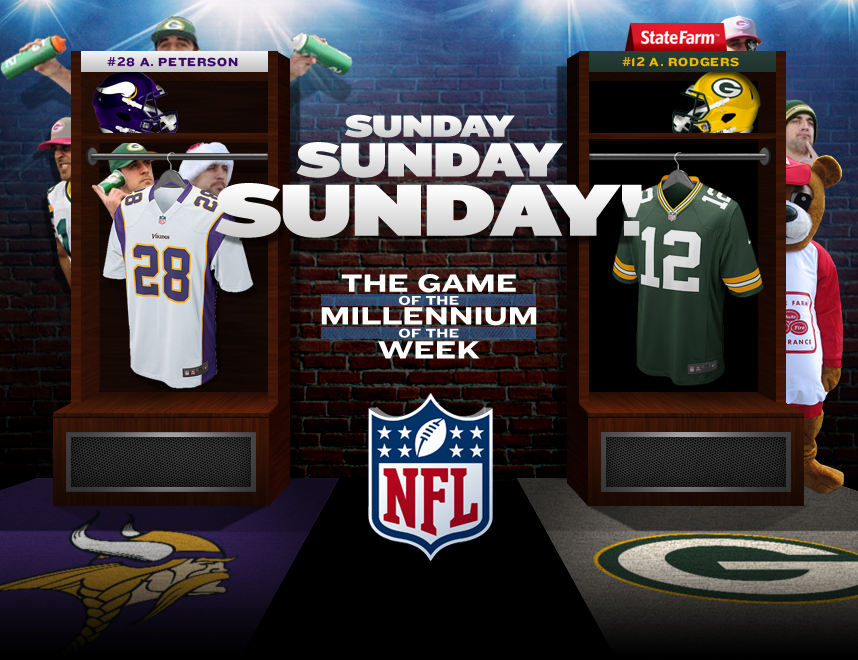 The Minnesota Vikings in the playoffs? Really? If you ever questioned the notion of parity in the NFL, here's your proof that parity exists. It's real, and in the right hands, it can be awfully effective.

On Saturday night, the Vikings, a team that finished with a 3-13 record just a season ago, will travel to Green Bay for a Wild Card weekend matchup with the Packers, a team that hasn't missed the playoffs in four seasons. That stretch also includes a win in Super Bowl XLV.

The right hands, for the Vikings, belong to Adrian Peterson. That's not entirely accurate. With Peterson, the right knees might be a more appropriate starting point. Peterson tore his ACL in a meaningless Christmas Eve tilt with the Redskins in 2011. It was supposed to be the end, or at least the start of the inevitable downhill slide; 2,097 rushing yards later, we learned that it was just a fresh start.

Peterson doesn't get all the credit for the Vikings' turnaround this season. The front office turned in a remarkable effort last April to help get the team to this point. Left tackle Matt Kalil, the fourth pick in the draft, gave Christian Ponder the protection he needed to make a dink and dunk passing game effective. Defensive backs Harrison Smith, who was never supposed to be a first-round pick, and Josh Robinson improved the team's secondary.

Green Bay is now two years removed from a Super Bowl win. Another Lombardi Trophy seemed inevitable last year when the Packers jumped out to a 13-0 start. A December meeting with the Chiefs exposed the soft underbelly of last year's Packers, and they went on to lose to the Giants in the playoffs.

The frozen tundra has been unusually cold since then, thawing a little in October of this year when the Packers finally started to get into a groove. Green Bay went 10-3 this year after a replacement ref assisted loss in Seattle. Had it not been for that loss, Green Bay would be the NFC's second seed. Don't expect this to be the last you hear of that incident.

History adds its own angle to this game. These two teams share more than pasty fans with a love for peppermint schnapps and fried cheese balls. Vince Lombardi, Brett Favre custody battles, Randy Moss' mimed mooning ... what new heights will the rivalry reach this weekend?

Thanks to State Farm, even non-football fans know who this guy is. If you invited any casual fans over to your house to watch this game, congratulations: you are an idiot. Prepare to be serenaded with cries of "RODJAHZ" for the next four around around a mouthful of chips and dip. Why are you even friends with these animals? You can do better than this. C'mon, man.

In-demand Madison Avenue executive Don Driver is going places. He's a vice president at Sterling Cooper and his heartfelt pitches are nearly as legendary as his good-looking womanizing ways. He's also a forward-thinker, promoting his secretary to copywriter. Who would even THINK of doing that here in the 1960s?! Don Driver is hiding a dark secret, however: he may not be who he says he is. Weaselly NFL climber Jason Campbell may be on to him. Will his carefully-constructed house of cards come crashing down?

Matthews is a four-time Pro Bowler and his biggest regret in life is that he wasn't cast as Thor in the film of the same name. Producers said they wanted to go with someone whose head was "less square" and explained that eventual star Chris Hemsworth "looked more like an actual human being" and that Matthews' screen tests "terrified people." But Matthews has the whole football thing going for him, so that's nice. And that commercial where he threatens to kill people in an airport. Things are looking up!

Adrian Peterson -- you may have heard of him -- lost his leg in a horrific being-awesome accident in December of 2011, so he fashioned himself a new leg out of knotty pine and a Slinky Jr. and got himself back in fighting trim. As soon as he could stand, he rushed for nine thousand yards and traveled back in time to sock Hitler in his dumb face. Adrian Peterson is a force of nature and woe be to the defenders who attempt to rope the wind.

In his second year in the NFL, Ponder has evolved into a mostly perfectly-OK quarterback, which is to say that he's worth about four Tebows and you can throw in a couple of Sanchezes there, too. He's getting better all the time, but will get a real test going up against Rodgers in a for-real postseason game. He's got a name that makes you think he's constantly wondering why sometimes there's only one set of footprints, but don't hold that against him.

Punters don't normally get a lot of pub (or mentions in the cast of characters), but punters also aren't normally bona fide World Wide Web darlings like Chris Kluwe. He pisses off homophobes, he plays in a band, he's a video game enthusiast and he kicks the ball a real long way. The Vikings aren't generally known for having a lot of personalities, other than that roided-up dude with the horn helmet in the stands, so we'll take what we can get.

Green Bay, Wisconsin did not start with the verdant name. The first name for Green Bay was "La Baie des Puants," or "the stinking bay." Early American settlers were a more honest people than we are, though to be fair it was the 17th century. Everything smelled bad, including what would be Green Bay.

With a population of just over 100,000 residents, Green Bay is the smallest city with an NFL franchise, and the only one owned by the community. The arrangement is a beautiful one, with the bond between team and city being the strongest in professional football, and the resulting management arrangement creating some of the most talented and consistent teams of the past two decades. Naturally, the NFL had banned this from ever happening again, and allows Green Bay to persist as a curiosity.

The Packers' stadium, Lambeau Field, is one of the last remaining interesting places in the league, a green, frosty colossus. You cannot get tickets, ever. We recommend parachuting in, and then seeing if legendarily polite Midwesterners allow you to sit in their seats because jeez, Ed, he parachuted in, the least we can do is let him have the seats. PRO TIP: do this wearing a Don Majkowski jersey, and they will totally let you do this. 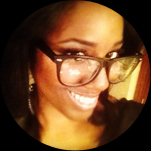 When keeping it real goes wrong

During a rough patch in last week's game, Greg Jennings' sister Valyncia took to Twitter to voice her frustrations. She called Aaron Rodgers "the most overrated QB in the league," called the Packers cheap, and voiced her preference for her brother leaving Green Bay for a team that will pay him more money. She's since deleted her Twitter account and opened up a private one, but her legacy as a legendary tweeter lives on. She's managed to get people thinking about things other than this weekend's game with her comments, which is impressive. Moral of the story: Don't follow athletes' siblings on Twitter. 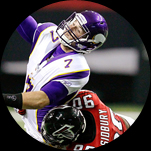 No matter what, Christian Ponder stinks

Christian Ponder had a very good game last week, and has been good in about half of his team's games this season. For a second-year quarterback who was inconsistent in college and drafted based on his ceiling, this is par for the course at worst. Don't tell this to Packers fans, because they'll tell you that Christian Ponder stinks from now until the end of time. He could throw six touchdown passes and run for three more at Lambeau on Saturday, and Packers fans would find a way to rationalize their thoughts on how bad he is at playing quarterback. They've made up their minds. 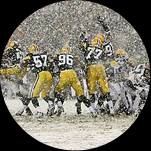 Going into last week's game, the Packers were said to have had the advantage over the Vikings because the game was taking place in a dome, which is conducive to the Packers' outstanding passing attack. This weekend, with the game taking place in the wind, cold, and (potential) snow at Lambeau Field, the Packers have the advantage because they're playing at home. Basically, regardless of where a game between these two teams is held, Green Bay has the advantage, according to the NFL media, Vegas sportsbooks, your Aunt Mabel, and everyone else outside of the greater Twin Cities area. 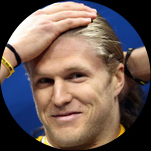 When asked about the Packers' defensive approach to stopping Adrian Peterson going into this Saturday's game, Green Bay linebacker Clay Matthews said, "We aren't giving up 200 again." It says something not just about Peterson's talent, but where Green Bay's defense is, that their stated goal is to stop a running back from reaching a yardage total that has been achieved just seven times in the postseason since 1961. Worse still is that, with Peterson averaging 204.5 yards on the ground in the two meetings between these teams this season, that goal still might be too pie-in-the-sky. Adrian Peterson will, likely, get his yards in this one. Just how many yards remains to be seen but, hey, the Packers want to hold him under 200. 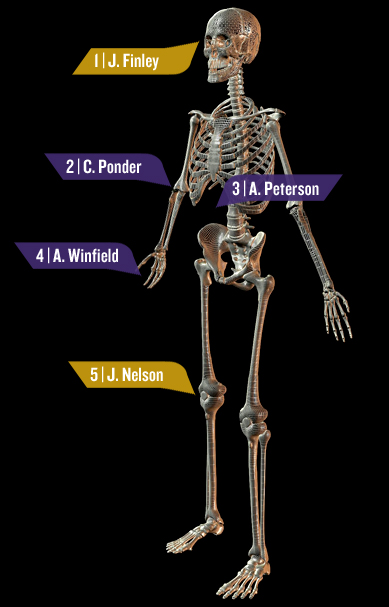 "I couldn't see at all throughout the game," Finley said after getting poked in the eye in the Packers Week 17 game against the Vikings. I think he's exaggerating, you guys.

Everybody expects him to play. But it could get fun if he doesn't because the Vikings third-string quarterback is something called a McLeod Bethel-Thompson.

The Vikings have to put him on the injury report because he's not practicing. But there is no chance he misses the game.

He's not on Adrian Peterson's level of importance to his team, but it would be a big blow if he were to miss the game. He'll be wearing a larger cast so he can club a few guys with hit.

He's likely to play after a knee injury put him on the sidelines late in last week's game against the Vikings. He did come back to catch a touchdown in that game. So he's fine. 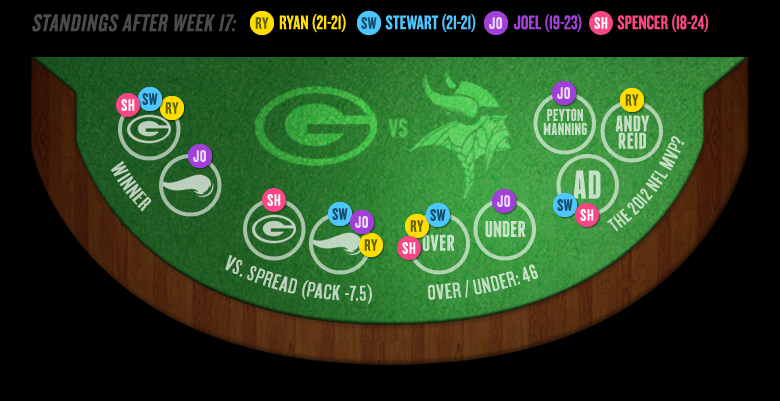 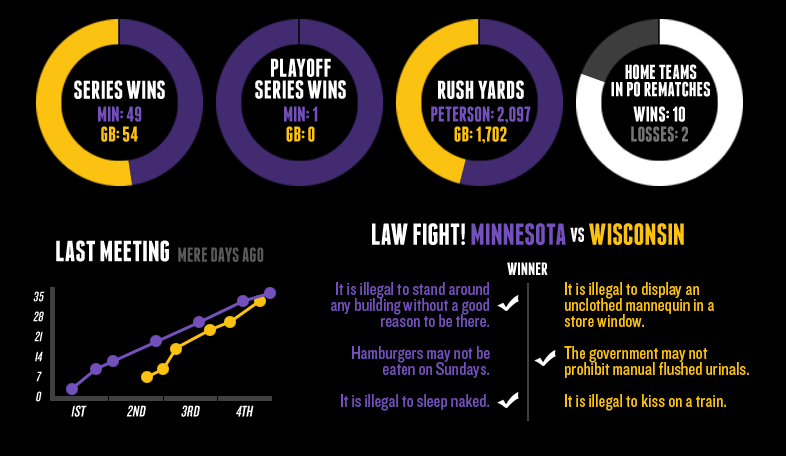 8 notes, nuggets, and numbers you need to know about the Vikings-Packers matchup on Saturday: http://es.pn/Z9Alq8

Q: What do you call 106 guys watching the playoffs next weekend? A: The Chicago Bears and New York Giants

Never thought I'd see the day that Christian Ponder outplayed Aaron Rodgers in a big game.