RGIII injury: Save some outrage for the field conditions at FedEx

The sloppy playing surface at FedEx Field on Sunday adds another dimension to the RGIII injury story.

Share All sharing options for: RGIII injury: Save some outrage for the field conditions at FedEx

In between complaints about the decline of smash-mouth football and rules protecting defenseless receivers, purists like to reserve a few barbs for domed stadiums and artificial turf. Football, the claim, was meant to be played on grass fields, preferably muddy ones. If that's our fancy, then the surface at FedEx Field for Sunday's Wild Card game between the Washington Redskins and the Seattle Seahawks was a pock marked field of dreams. Unfortunately for the players, it was a nightmare.

Redskins fans are holding their collective breaths Monday morning, waiting for the results of an MRI on RGIII's knee. Already hobbled, Griffin got a bad snap in the fourth quarter. He went back to get the ball, planted his right leg and down he went, his knee bending with a rubbery twist downward.

Of course, RGIII was not the only player injured in the game. Seattle defensive end Chris Clemons may have torn his ACL. That's a significant loss for the Seahawks, losing the team's sack leader.

Clemons' agent, Donal Henderson, wasted no time in pointing to the field conditions as a key culprit in his client's injury.

"It's a shame," Henderson told the NFL Network after the game. "He's worked so hard to get there."

He went on to point to the field conditions, calling them "crappy." Clemons and others wore 3/4-inch cleats in an effort to get at least some grip on the field. Shoes with 10-penny nails attached might not have been sufficient.

Clemons and RGIII weren't the only ones injured, just the most obvious ones.

Take a look at the view of FedEx Field from above, as provided by FOX. Note the network's description of the field conditions. 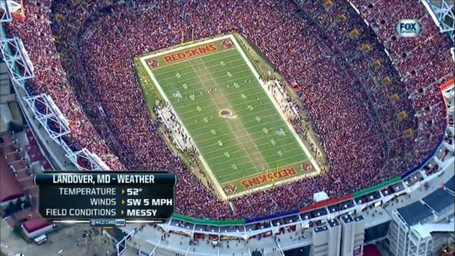 Messy. That's one way to put it, a very polite, primetime network television term for describing a field that looked as though a squad of tanks from the Marine Corps base at Quantico took a spin around the field prior to the game.

Also, that's the before picture. By the time the game got into the fourth quarter, the brown stripe down the middle got wider and darker, consuming whatever was left of the grass between the hash marks.

Just for the sake of comparison, let's slip this photo in here. 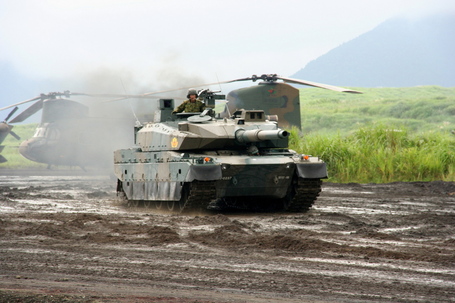 The difference isn't as stark as it should be.

It's rare that the NFL press release that comes through my inbox doesn't mention player safety. The league got serious about concussions after Roger Goodell's fellow blue bloods in Congress compared the NFL to the tobacco industry. Today, the league's talking seriously about eliminating kickoffs.

So here we are in the golden age of player safety, and the league still has no hard and fast rules governing field conditions.

The league has intervened to address field issues before. Prior to a January 2004 playoff game, the NFL told Patriots owner Robert Kraft to re-sod the surface there. After an ugly loss to the Jets in October 2006, the Krafts replaced the grass field with artificial turf during the season. That was a team decision, and you can imagine Bill Belichick's opinion on the matter when he lost the game to wayward son Eric Mangini, in part because of the sloppy field.

To anyone who has seen their tax dollars go to a stadium, which is almost all of us, you know that those billion dollar temples aren't just for football anymore. Concerts, soccer games, and whatever else owners can squeeze onto the calendar to add a little more to the bottom line. Stadium revenues like that don't get put into the revenue sharing pool with players, either.

If the NFL is going to bat for both player safety as well as lobby locals to support stadiums, there needs to be some kind of rule governing the condition of the field and turf. Watching linemen wallow around in the muck and speedy players kick up dirt clods with their cleats is a lot of fun, until your favorite player, the face of the franchise goes down, burying your hopes for the team in the mud.