Cris Collinsworth's Sunday Night gaffe highlights a Week 4 of NFL memes that are either sad or bloody. In other words: another typical week!

Cris Collinsworth: We all know about Aqib Talib and his history. What happened in Tampa and all Bill Belichick does is bring ‘em in here and there hasn’t been one ounce of a problem. You know, there’s something about when they come in and play for the Patriots, whatever their issues may have been before, they disappear.

It's not easy to talk about a sporting event as it unfolds on live television, and Cris Collinsworth is typically one of the smoothest and least objectionable analysts working on NFL broadcasts. The glaringly idiotic quote above, though, may be the dumbest thing he's said since he declared his love of underage girls. But at least that gaffe was grounded in fact. Sunday night's fawning over Bill Belichick's magical touch was the sort of blatant falsehood that wouldn't fly on a middle school debate team, and Al Michaels' failure to correct his broadcast partner is almost as egregious as Collinsworth's lie. If everyone watching the game is saying, "WHOA HEY WHAT ABOUT AARON HERNANDEZ?," maybe someone in the booth should note that as well.

Hernandez, as you may recall from the thousand or so articles you read about him this summer, was a talented tight end whose stock fell in the 2010 draft because he had a documented affinity for weed and guns. He has since been charged with first-degree murder and connected to other murders, which I would argue is THE EXACT OPPOSITE of a problem disappearing. That is a problem exacerbated in the worst way.

Want to exempt Hernandez as a once-in-a-generation outlier? Fine, try this: as Collinsworth praised Talib and his moral rehabilitation, the cornerback playing opposite him was Alfonzo Dennard, a seventh-round pick in the 2012 draft who had been projected as a second-rounder until he was accused of punching a police officer a week before the draft (he was later convicted of felony assault). This summer, Dennard was arrested on suspicion of DUI, a violation of his parole for which he'll be sentenced in December.

This is not to assail Dennard's character, or in any way liken him to Hernandez. But the notion of the so-called "Patriot Way" -- the mythos of Bill Belichick transforming cast-offs with attitude problems into WINNERS -- was always flawed, an easy narrative that oversimplified the complexities of human beings. By continuing to believe in a proven falsehood, Collinsworth only reveals an unforgivable bias or an unbelievable stupidity. 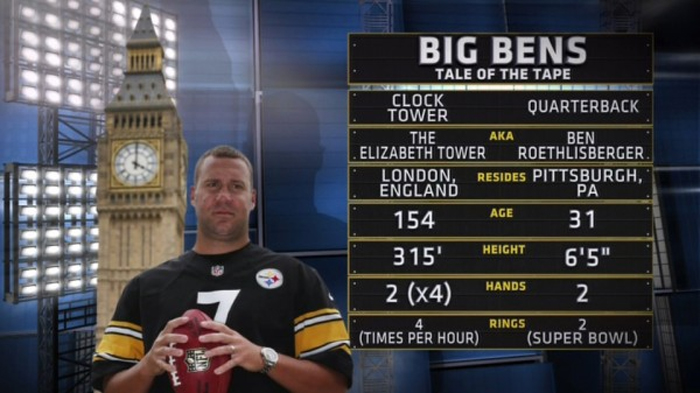 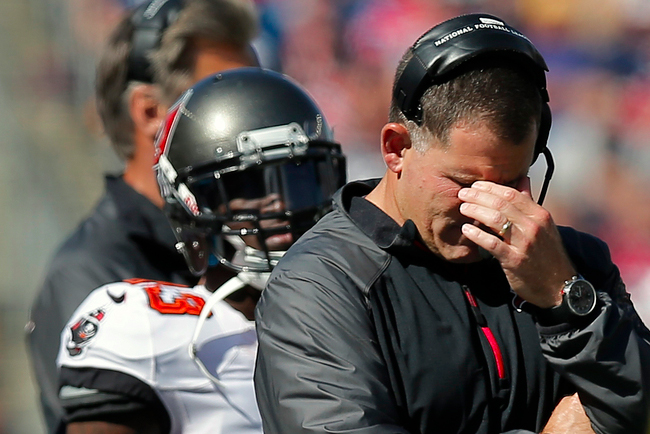 The Buccaneers are now 0-4 despite playing three games where they had a 95% of winning with less than five minutes to play. My GOD that information is both delicious AND nutritious. It fills me with a warm happiness, like sitting in front of a fire with a glass of cocoa while it sleets outside. I would rather have five separate conversations with different people about that stat than eat my next meal. It just fills me up.

I don't even like Josh Freeman, but I hope he poops in Greg Schiano's desk.

Presenting A Tale of Two Rivers:

Philip Rivers is my favorite.

(both GIFs by @cjzero) 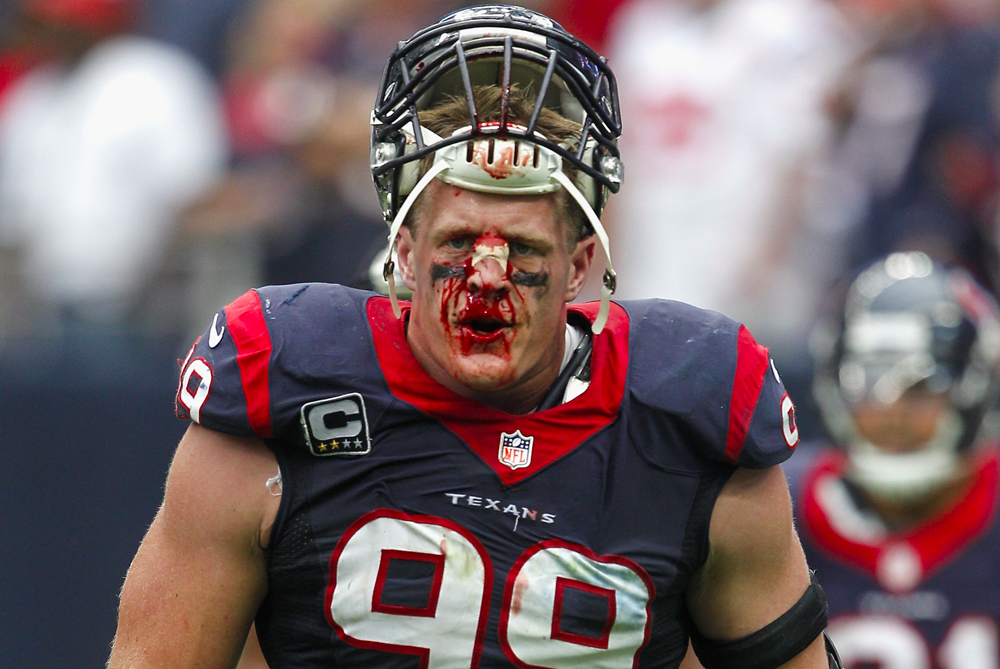 J.J. Watt spent most of Sunday in Seattle's backfield, and one of the many hits he laid on Russell Wilson opened up a gash on his nose that needed six stitches. A freakishly athletic 6-foot-7 human with hands like bear claws is already scary enough, I really didn't need him getting the Andrew W.K. treatment. Note the blood on his jersey, chinstrap, and facemask. He looks like a crime scene.

That crime, unfortunately, was grand larceny, as the Seahawks executed a heist in a game they had no business winning.

Oh, Matt Schaub. Forever counting the hundreds of dollars he just got from the ATM while walking through a bad part of town. Just humming along to Coldplay and looking down at his fistfuls of twenties as he strolls past boarded-up windows and crumbling sidewalks on a dark street. Nope, nothing to worry about. 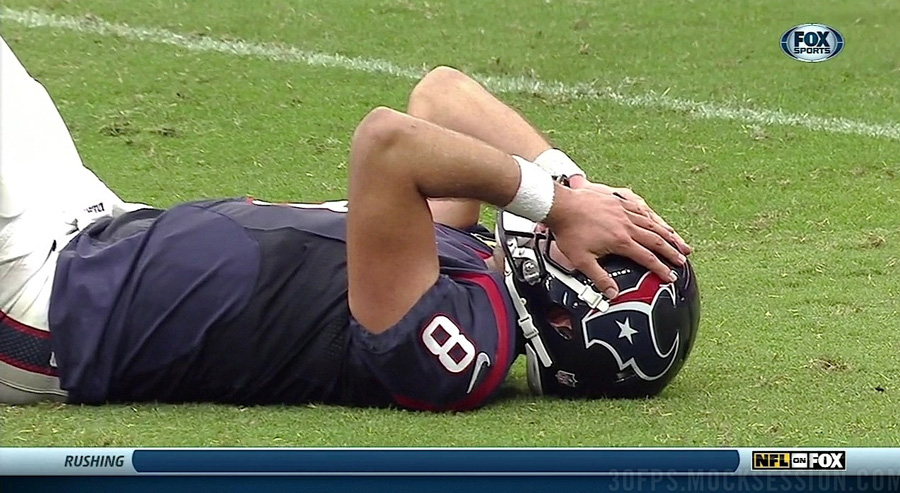 Lest Matt Schaub get all the attention for terrible interceptions, Eli Manning's arm-punt in a blowout loss was particularly savory. Eli and the Giants have now turned the ball over sixteen times in four games, while big brother Peyton has 16 touchdown passes and zero picks. How marvelous. 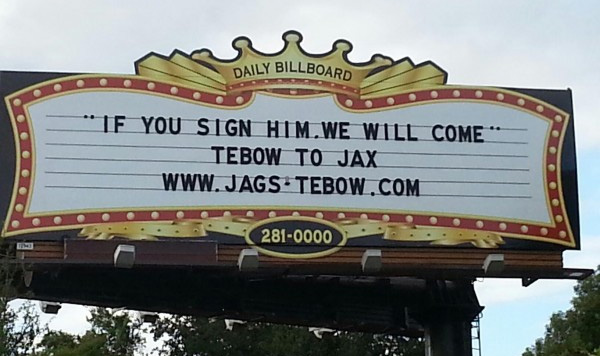 If you have not already been there, jags-tebow.com is an ugly, depressing site -- the metaphor for Jacksonville is too easy -- with the syntax and sports radio reasoning of @PFTCommenter. Witness:

Love him or hate him ....Tim Tebow behind center in a Jacksonville Jaguar uniform would change everything.

We are asking that YOU Take action NOW. We are mobilizing the City Of Jacksonville to pressure the Jaguars to signTebow. If the Jags got Him....Overnight, The Jaguars would be on the National Stage. The Stadium will be full of Tebow Maniacs & Tebow haters alike. The whole country would tingle with anticipation & all eyes would be on Jacksonville. Not as a punch less loser but as the Grand-Final-Once-and-for-all Tebow proving ground.

What's terrifying about this is the same that's terrifying about most manifestos: the moment where you find yourself thinking, "Well, they DO have a point about..." which is how governments fall and terrorists sway desperate people. That's why I've developed a counter-movement to the "Tebow, Why Not?" campaign:

"A 45% completion percentage from your quarterback isn't normal... but on Tebow it is."

"An overwhelming media circus for a backup quarterback isn't normal... but on Tebow it is." 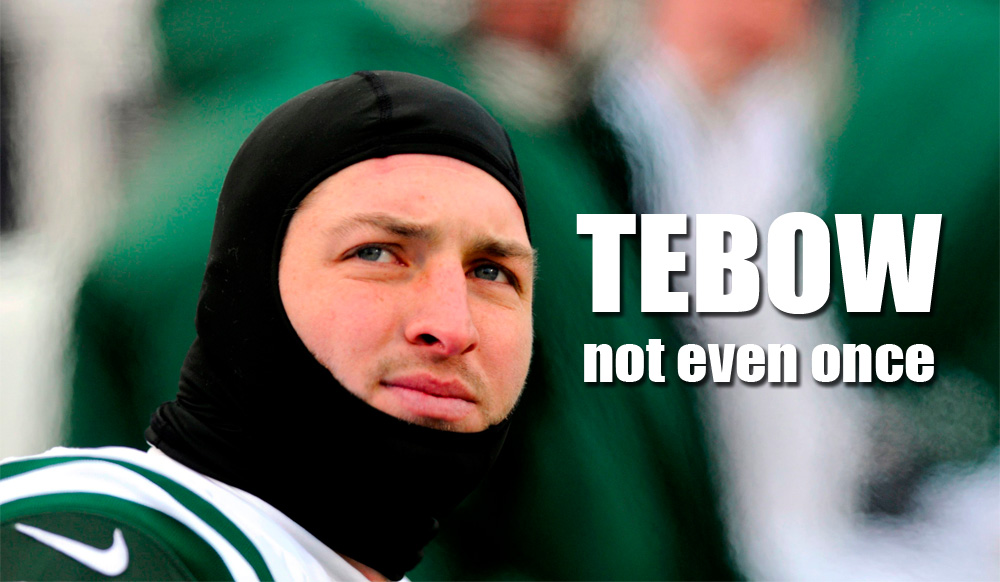