With LEO linebackers and weakside defensive ends, Seattle's versatile front seven keeps opponents guessing. Ben Muth takes a closer look at how they do it.

Share All sharing options for: Muth read: The Seahawks and multiple defensive fronts

"We want to be multiple." - Every defensive coordinator ever

If you have read a local newspaper story about a newly hired defensive coordinator in the past three years, that quote has been hammered home again and again. Maybe he used "versatile," maybe he said they wanted to run a hybrid scheme, but the intent is always there. Defenses want to be multiple. That means using different personnel packages, fronts and coverage looks to confuse offenses and generate favorable matchups. Essentially every team wants to be able to do what the Seahawks can do, and what they did do to stop the 49ers.

The best place to start with the Seattle defense is its base defensive alignment. It’s essentially a 4-3 under. That means the defensive front four is shaded on the offense’s weak side and the Sam linebacker is walked up on the line of scrimmage. It’s a classic front that every team has in its playbook somewhere. Seattle lined up in this base alignment, the very first play of the season. 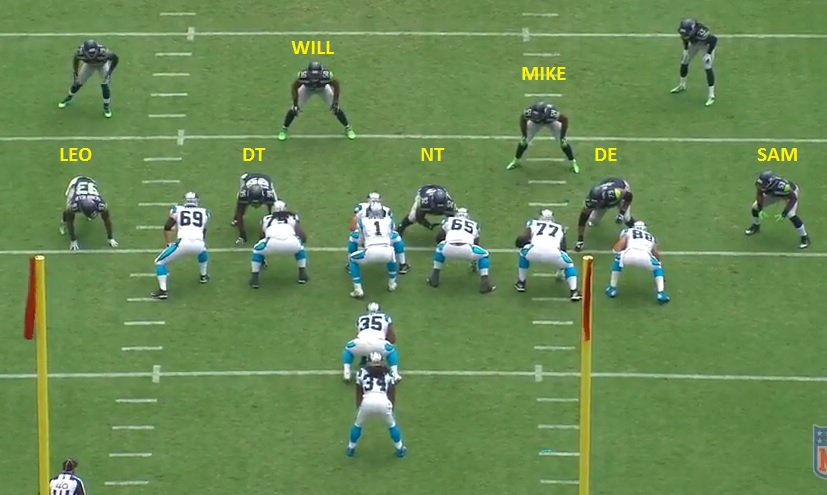 The reason I used the qualifier "essentially" is that the Seahawks' weakside defensive end is actually a DE/OLB hybrid type player called a LEO (O’Brien Schofield in the picture above). It’s important to point out that the Seahawks always send the LEO to the weak side and a defensive end, usually Red Bryant, to the strong side. In the photo above, Bryant is No. 79, labeled as the DE on the right side of the photo. The LEO can play as a stand-up linebacker or a down defensive end depending on the individual player’s preference. The past few years Seattle’s LEO has been Chris Clemons, but with his injury to start this year, the Seahawks have turned to a couple different people. In Week 1, they leaned on Schofield at this spot.

Originally, this whole article was going to be about the LEO in particular, but as the column came together it kind of shifted. What I do want to get across is why Pete Carroll uses this hybrid position. The first is that the Seahawks are able to get the most out of some tweeners with one strong skill. Chris Clemons is too small to play as a traditional 4-3 DE and probably not versatile enough, from a coverage standpoint, to be an every-down 3-4 OLB. There was a reason he bounced around before breaking out with Seattle. But Clemons can flat-out rush the passer, and Carroll wants a dynamic pass rusher on the field on all three downs, not just third-and-long. The downside is that Carroll has to find a way to protect an undersized pass-rush specialist against the run.

The reason most 4-3 teams don’t major in under fronts is because it leaves them vulnerable to strongside runs, because most 4-3 defensive ends -- Jared Allen being the prototype here -- wouldn’t do so well taking the pounding of playing a five-technique to the tight end side all game. They’d end up taking on double teams all day long, and it would sap their pass rush. That’s why the Seahawks have a guy built to play 3-4 DE, Red Bryant, as their strongside DE.

On top of being very schematically sound, the Seahawks defense has the added benefit of being made of mashed up parts that make it easier to acquire talent to fit. It’s hard for any one team to acquire two dominant 3-4 DEs as starters and two serviceable ones as reserves. There just aren’t enough big, long guys who can swallow double teams up but are quick enough to play on the edge. But the Seahawks really just need one good five-technique and one serviceable one since they are only playing them to one side at a time.

The same goes for the LEO position, which we already touched upon. It’s really hard to find 4-3 DEs who are stout enough to play the run on first and second down and then get after the QB on third  down; those guys are expensive. It’s also hard to find 3-4 linebackers who can drop into coverage or rush the passer. Heck, Dion Jordan was the third pick in the draft this year on the theory that he might be able to do both despite never showing a knack for pass rushing in college.

Tweeners like Clemons and Schofield are much easier to find. The Seahawks acquired Clemons and a fourth-round draft pick for the immortal Darryl Tapp, and they picked up Schofield when the Cardinals cut him in training camp this year. Not exactly hot commodities around the league.

So, that’s the 10,000-foot view of the Seahawks' base front and some advantages the scheme gives them. But obviously, all schemes need adjustments based on the opponent. One of Pete Carroll’s favorite tweaks to this front is to reduce the five-technique (Bryant) down to a three-technique and play what’s known as a "Bear" front (named after the Mike Ditka/Buddy Ryan Bears). The Seahawks ran a ton of Bear vs. the 49ers in their Week 16 win against them last year. 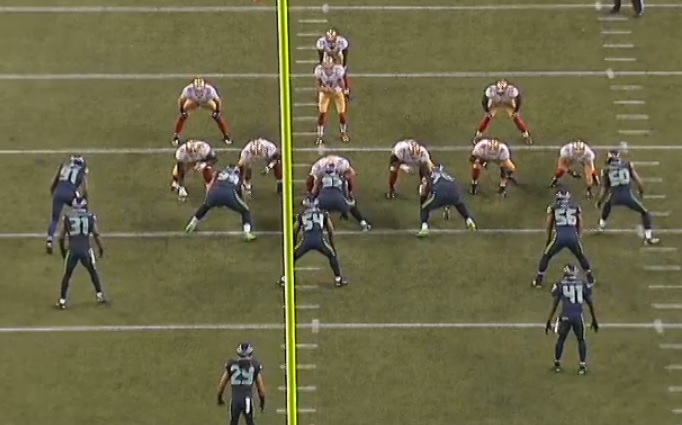 The reason Seattle went to a Bear front so much against the 49ers last year is that the 49ers were still a "Power O"-based team then, and frankly it’s a bitch to run the Power O against a Bear. The reason it’s so tough is that it’s hard to create double teams and pull someone when all three interior linemen are covered. You either have to go with three single down blocks by the play side (Diagram-1) or you have to cut the backside three with the tackle, reach the nose tackle with the center and get a double team on the playside three (Diagram-2). 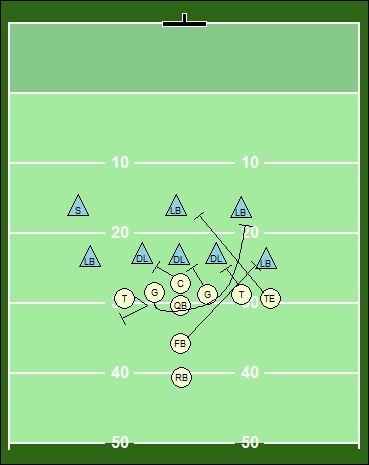 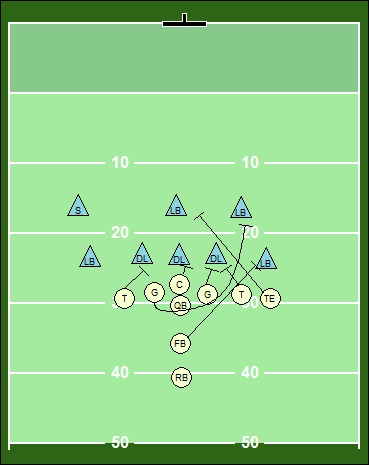 Neither is ideal, and both lead to a soft middle in the play that can make it tough for the pulling guard to negotiate around. The Seahawks’ Bear front did exactly what it was designed to do. It stifled the 49ers' bread-and-butter run last year, and was a big part of that rout.

The biggest downside to the Power O is that it is a slow developing off-tackle play. Bear fronts kill slow developing plays because those three defensive tackles create an absolute pile up right in the middle of the formation. The read option, however, attacks where a Bear defense is vulnerable, right at the edges. Not only that, but it attacks the weakness quickly and with the added bonus of not having to block the end man on the line of scrimmage.

People seem to forget that the read option wasn’t a big part of San Francisco’s game plan until the playoffs last year. So, while the Seahawks' Bear adjustment was great against the 49ers' old run game, it was vulnerable against what the 49ers rode to the Super Bowl. Take a look at some of highlights from San Francisco’s postseason run.

First, let’s ignore how the Ravens and Packers are playing the "read" part of the read option. A lot of the talk this offseason was about how to defend that. There were a dozen different theories: attack the mesh point, gap/scrape exchange, feather the QB, etc. That was something that defensive coordinators had to think about, but what probably terrified them about this 49ers team was how not blocking a guy at the point of attack freed up the 49ers offensive line to kick the hell out of guys with straight double teams. Look at the playside three-techniques in the GIFs above. They are all getting absolutely crushed. I mean it looks like Charles Barkley vs. Angola out there.

If the Seahawks ran their base defense or their Bear front, they would always be left with the weakside three-technique at the mercy of a couple of 315-pound men. I think the Seahawks' defensive personnel is a little better than Baltimore’s last year and a lot better than Green Bay’s, but you don’t want to make a living taking on Mike Iupati and Joe Staley one-on-two. So Seattle needed a new adjustment to contain what the 49ers had become. Its adjustment was both simple and inspired.

The Seahawks just flopped their front. 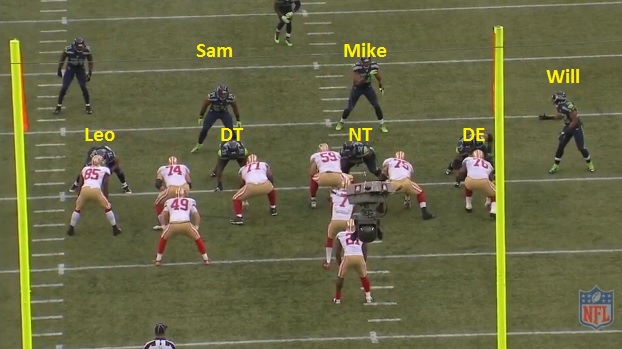 Against San Francisco, Seattle always sent Red Bryant to the weak side of the formation, and lined him up as a five-technique over there (sometimes a 4I, which is on the inside shade of the tackle). That meant that the LEO would have to play the strong side. The Seahawks would try to protect him versus the run with a three-technique by playing an over front, but Schofield wasn’t going to be able to stand up on the strong side for a full game if the Incredible Hulk was lined up inside. So Seattle went with a different offseason acquisition at LEO instead, 275-pound Michael Bennett.

Seattle toyed with some other fronts as the game went along. There were a couple of common denominators: Red Bryant, labeled DE on the right side of the photo and lined up over the weakside OT, either head up or with a slight inside shade, and Michael Bennett lined up to the strength of the formation.* Here’s a base 3-4 look the Seahawks mixed in too.

*This only applies to base defenses in non-obvious passing downs. Once it got to third-and-long, all bets were off. 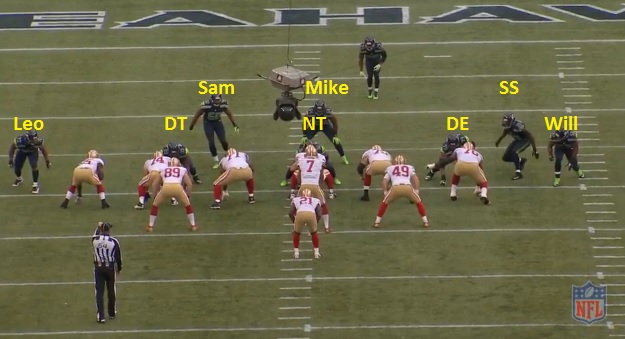 Once again it’s Red Bryant on the weak side and Johnson over the TE. It’s just that, here, Johnson is more obviously playing the part of the world’s biggest OLB. But more important than what they did is why they did it. The best possible explanation is this GIF.

The 49ers can’t get a double team on the playside down lineman anymore. Because Bryant was so wide, it would bust the inside zone rules of a read-option play for the guard to go out there and double-team. Plus, if the guard did go outside to double-team, he wouldn’t be helping collapse a down lineman inside to widen the hole; he would be knocking the DE out right into where the QB wants to run.

Now, Joe Staley is one-on-one with Red Bryant. Staley may be the best run-blocking tackle in the league, but I’m not sure anyone can block Bryant by himself when he doesn’t know where the ball is going. Think about how hard Staley’s job is here. He wants to try to wash Bryant down the line as far as possible so either Frank Gore or Colin Kaepernick has as much room as possible off his butt. But he also has to try to cover Bryant up completely just in case Gore takes it to the strong side of the formation. The result is Bryant putting on the brakes when he sees Kaepernick keep it, and throwing Staley by.

Go ahead and watch that GIF one more time. Imagine if Bryant gets double-teamed and washed down as far as the guys in those first three GIFs. All of a sudden, Kaepernick has a ton of space and is one-on-one with a safety with an 8-yard head of steam. If that happens enough, it’s a recipe for some Kaepernick Bicep Smooches (band name?) no matter how good of a player Earl Thomas is.

Once again, all defenses want to be multiple because this is what multiple allows you to do. Seattle is missing Bruce Irvin and Chris Clemons right now, and it can still completely change its defense from one week to another and swap out its players to best fit what the team wants to do that week. In Week 1, Schofield played in 69% of the snaps and played well. In Week 2, the game plan changed and he played in just 30%. Bennett went from being the Seahawks' fifth in Week 2. One thing that didn’t change was the result, a stifling defensive performance.