Someone leaked some very personal information about the Buccaneers quarterback. Whether or not it was Greg Schiano and the Buccaneers, it looks bad for the coach and his team.

Share All sharing options for: Greg Schiano, Josh Freeman and the lessons of leaking sensitive information

1. J.J. Hunsecker was not a man to be trifled with. Singers, actors, and musicians went through New York's most powerful gossip columnist to launch their careers or stay on the A-list. And he wasn't hesitant to use his position to wage personal battles -- as in the case of a certain jazz musician he didn't want his sister seeing.

Hunsecker is a fictional character, played by an intimidating Burt Lancaster, at the center of the 1957 film Sweet Smell of Success. Like so many bad guys, Hunsecker's undoing came when he pressed too far, insisting on planting a bogus story about that jazz musician, even after he'd already accomplished his goal of breaking his sister's heart. 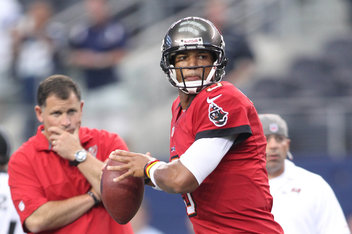 From David Fucillo
The NFL "Policy and Program for Substances of Abuse" is the primary means of punishment for the unauthorized breach of confidentiality of Josh Freeman's status in the NFL's drug program. Section I.B of the Substance Abuse policy governs confidentiality. It requires all pertinent parties (NFL, employees, clubs, etc) "take reasonable steps to protect the confidentiality of information acquired in accordance with the provisions of this Intervention Program ... "
Section I.B.3. governs discipline of confidentiality breaches. It allows for fines of between $10,000 and $500,000 of any party who violates the confidentiality provisions.
It is also possible this privacy violation could be covered by the privacy provisions of the Health Insurance Portability and Accountability Act of 1996 (HIPAA). Under a fairly simplified look at HIPAA applicability, it would seem to apply to the NFL. HIPAA protects the privacy of individually identifiable health information, providing for fines of up to $50,000 per violation.
While there is legal recourse under the Substance Abuse policy, and potentially under HIPAA, it still requires some manner of a smoking gun. Pro Football Talk reported the NFLPA is planning on "coming after everyone" to determine who violated the confidentiality. There are numerous possible sources for the leak, which means it could prove difficult to nail down the specifics. That being said, it is a serious enough issue that the NFLPA's approach is necessary to prevent this kind of leak in the future.

2. Greg Schiano is not a fictional character, much to the chagrin of so many Buccaneers' faithful. His ongoing back and forth with Josh Freeman -- going on nine months now -- has everything the gossip-hungry NFL fan in your life would enjoy. It has all the makings of a Hollywood divorce played out in 90-second segments on ET, or PFT in this case.

Spring 2013 - Free agent visit, trade talk and all the other grist in the offseason rumor mill link the Bucs to Matt Cassel and Carson Palmer.

March 5, 2013 - Freeman's agent and the Bucs got it all squared away during a meeting at the Combine.

April 10, 2013 - Everyone in the front office is cool with Freeman. Greg Schiano is reportedly not okay with Freeman.

Aug. 2013 - There's no quarterback competition in training camp. Freeman has it, and even gets another vote of confidence. Uh oh.

Sep. 8, 2013 - Tampa Bay loses to the Jets, thanks to sloppy all around play and a bone-headed, last-minute penalty that sets up New York's win.

Sep. 12, 2013 - MISSED TEAM MEETING, first appearance. Schiano makes a point to tell the media that Freeman overslept and missed a meeting before the Jets game. And it's not the first, apparently.

Sep. 15, 2013 - The Bucs lose to the Saints. First reports that Freeman wants a trade and he and Schiano are having troubles surfaces.

Sep. 16, 2013 - Now it's Revis and Schiano having problems. Things might not be all that great in Tampa.

3. Freeman admitted in a statement Monday night that he had an exemption from the league's banned substance program for Adderall. He took Ritalin by mistake, tested positive, voluntarily enrolled in the league's substance abuse program. That includes repeated drug testing, 46 tests for Freeman, according to his statement. Leaking this kind of information is not only a big deal, it's illegal. HIPAA applies to the NFL and its players just like it does to the guy who got hemorrhoids in your office.

"There is no football exception to the basic medical standards and workplace safety laws that apply to everyone in America," NFLPA spokesman George Atallah told SB Nation.

4. Confidentiality be damned, ESPN's Chris Mortensen reported that Freeman was in Stage One of the substance abuse program. Stage One puts more than one strike between a player and a suspension. Freeman clarified the details of the situation after Mortensen's initial report. The quarterback was in good standing, according to Mortensen's source, which begs the question, why risk leaking that information?

And why is it really news that Freeman had an exemption for a banned drug, as Mortensen's initial report did?

Who didn't want their sister taking up with a Tampa Bay jazz musician?

5. One theory circulating is that some calculating front office put the information about Freeman out there. The narrative was established, accurate or not, about Freeman being a problem in the locker room. A nugget like this could drive down the asking price ahead of the trade deadline at the end of October.

6. Josh Freeman has an idea about who put that information out there. From his statement Monday night:

"Unfortunately, it appears that some people who may have noticed the testing at my workplace have made hurtful and incorrect assumptions and chosen to disseminate inaccurate and very disturbing information. It is a shame that when times have gotten tough, people have chosen to attack the character of others, rather than supporting each other."

This wasn't a recent happening for Freeman. He was getting the regular drug tests when Schiano arrived as head coach last year, and that reportedly made the coach suspicious, according to a report from Mike Garafalo of Fox Sports. But the quarterback assured him everything was fine, without going into the details, and that there was no danger of a suspension.

7. Days after the Revis stuff hit the wires, NFL.com ran a glowing profile of Schiano as a character from a Bruce Springsteen song. Sunday morning after Freeman was benched, more anonymous reports about missing meetings surfaced.

On Sunday, the Buccaneers lost a fourth straight game. It wasn't Josh Freeman's fault; he was watching the game from a suite. Schiano took the flak for his team's loss last week. With a 10-point lead, he put the ball in the hands of his rookie quarterback to preserve a win. Just like the Jets game, a last-minute penalty helped push the Cardinals over the top.

8. We'll probably never know whether Schiano and the Bucs, or whoever it was, walked all over Freeman's privacy rights and gift-wrapped this latest nugget for the national media. Why would they, you wonder? It risks making him harder to trade, in theory. But an $8.4 million salary always meant that a trade was going to be tough.

Then again, why go to all that trouble to leak all of the other information about Freeman, especially after he was already benched? The smear campaign makes it hard to just assume this is just another negotiating tactic played out via text message.

If it was Schiano that put it out there, it might cost him his job quicker than his record on the field. Bucs Nation, SB Nation's team blog, laid it out Monday night, calling for the coach's dismissal if it turns out that it was him.

9. Someone crossed the line separating strategic gossip and personal vendetta. The lawyers take over from here. We still don't know who put the substance abuse program revelation out there on Monday. Most likely, we'll never find out either. The problem the Bucs have with it is that it fits a pattern. Fans are only going to take so much.

In the movie, the capricious columnist goes on, hardened by what he's done. Hunsecker's faith in what he does gets stronger, and he goes on imposing his will on the entertainers beneath him.

Schiano, like all coaches and gossip columnists, is devoted to his approach.