The post-mortem, Week 4: Only Ron Dayne can save the Giants!

Share All sharing options for: The post-mortem, Week 4: Only Ron Dayne can save the Giants!

Our focus here is usually scientific, but I want to take a moment and address the emotional aspect of loss. You played poorly, Matt Schaub/Andy Dalton/Blaine Gabbert, but it's not all bad. At least Greg Schiano's not making a crude photoshop of you kissing an unattractive horse right now. 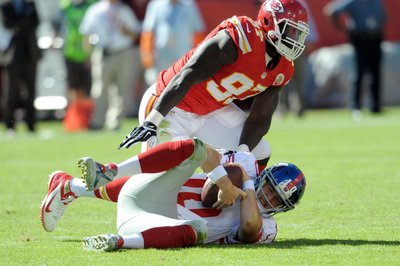 What's the matter with the NFC East this year? A frontline report from the NFL's most dreadful division.

Time of Death: 64 seconds left to play, as Kiko Alonso collected his second interception of the day with Baltimore near midfield.

Cause of Death: You will focus on Joe Flacco's five interceptions in this game, and rightly so. But did you know he was terrible otherwise? Like, on third downs? Where he went 5 for 16 for only 55 yards? And threw three of those picks? It's gross but true!

Time of Death: Brian Hoyer, Puppeteer of the Fates, threw his second touchdown pass with five minutes left to play and put Cleveland's lead out of reach.

Cause of Death: The Bengals got nothing out of their running game, managing just 63 yards on 20 carries. One possible reason for that ineffectiveness? Cincinnati never called a single running play on third down, despite needing four yards or fewer on 5 of their 14 conversion attempts.

Time of Death: Any attempt at a highly improbable comeback ended when the Lions recovered Chicago's onside kick with 43 seconds remaining.

Cause of Death: Jay Cutler's first drive of the game was a promising one, distributing the ball to multiple receivers and helping the Bears move 54 yards and kick a field goal. The rest of his drives in the first half? Well...4/12, 50 yards, 2 sacks, 2 interceptions. That allowed the Lions to jump out to a 17 point halftime lead, and, since the start of the 2010 season, teams that trail by 17 or more after two quarters are only 9-130. So really, you just did what you were supposed to do, Chicago.

Time of Death: After 43 catatonic minutes, Dexter McCluster put the Giants out of their misery with an 89-yard punt return touchdown.

Cause of Death: It showed some improvement, but New York's running game still couldn't break 100 yards, the first time the Giants have had a four game streak without a triple digit rushing attack since 2001. And who was the man the Giants trusted with the bulk of the carries that year? That's right -- Ron Dayne. Find him, New York. Find him, and sign him.

Time of Death: Tampa's last gasp, hitched to a Mike Glennon interception, was expelled with 56 seconds left to play.

Cause of Death: After four weeks, 31 NFL teams have at least one touchdown drive that started in their own territory. You have probably guessed who the team left off that list is. Nothing explains the 2013 Buccaneers better than pointing out that they won't get into the end zone unless their opponent does literally more than half the work for them.

Time of Death: Three minutes and 12 seconds into the second quarter, Darius Butler caught a pass from Blaine Gabbert and took it 41 yards for a touchdown. It bears noting that Daris Butler does not play for the Jaguars.

Cause of Death: While "Gabbert or Henne?" sounds like the worst dating game in the world, Jacksonville's getting essentially nothing from its running game, as nine of the 16 designed runs they called for wound up gaining less than three yards. Currently averaging a league-worst 2.3 yards per carry, the Jaguars are in real danger of becoming the first team since the 1994 New England Patriots to finish the year with a team rushing average below three yards.

Time of Death: It took nearly 13 minutes of overtime, but Seattle finally snuffed out the Texans on Steven Hauschka's 45 yard field goal.

Cause of Death: Whenever Houston crossed the 50 yard line in the second half, they exhibited the poise of a blind Pomeranian with an anxiety disorder, running eight offensive plays that resulted in a grand total of negative nine yards and a turnover. Fortunately, the Texans never got into Seahawks territory in overtime. Wait, that's what "fortunately" means, right?

Time of Death: With 19 seconds left, Ben Roethlisberger was sacked and lost the ball on third and goal of what would have been the game-tying drive.

Cause of Death: This was Pittsburgh's fourth straight game with a turnover margin of -2 or worse. Over the last six seasons, the most TOTAL games with a Steeler margin that low had been three. Seriously, how do you face Jake Locker, Andy Dalton, Jay Cutler, and Matt Cassel and not get a single takeaway on defense? If this doesn't change against the next Pittsburgh opposing quarterback, Geno Smith, we will have to confront the very real possibility that witchcraft is at work.

Time of Death: Justin Hunter's 16 yard touchdown catch with two seconds left in the first half turned what was a game within reach for the Jets into a blowout.

And just look at this terrible tackling.

At least make a play on the ball, zebra.

Time of Death: Kickoff of the second half, a 30-minute Eagles hellscape where the Broncos would outscore them 31-7.

Time of Death: With under three minutes to play, Terrance Williams fumbled a yard away from the end zone, allowing San Diego to to run out most of the clock.

Cause of Death: Congratulations, Dallas defense. You just allowed Philip Rivers to finish a game with:

Fine work indeed. At least you're still the employed member of the family, Monte Kiffin.

Time of Death: Matt Flynn's fumble near midfield with roughly eight minutes left turned into a Washington touchdown two plays later, because Matt Flynn keeps getting passed over for starting jobs for a reason.

Cause of Death: The wheels had started to come off for Flynn shortly before that, however -- in three Oakland drives after Washington took the lead midway through the third quarter, Flynn had a 1-to-1 sack-to-completion ratio, which is a nice way to say "Get well soon, Terrelle Pryor."

Time of Death: The last Falcons play of the game, when Aqib Talib broke up a 4th-and-goal pass intended for Roddy White.

Cause of Death: Considering it's a place Atlanta visits pretty often, the red zone is not all that pleasant of a destination this season. Six Falcons drives crossed the New England 20; three ended in field goals (two from less than 30 yards away), one ended in a touchdown, and the other two ended in a turnover on downs. Even Herm Edwards sees the problem here, and Herm Edwards can't complete a 25-piece children's puzzle.

Time of Death: Just before halftime, Miami was hoping to capitalize off a New Orleans three-and-out and cut the lead to 1, if not take it outright. Ryan Tannehill's interception crushed that hope, however, as the Saints quickly snapped off four plays and took an 11-point lead into the locker room.

Cause of Death: The Dolphins had no answer for Darren Sproles in the first half, allowing him 101 yards after he caught the ball. This concludes the saddest science fair project ever, "What Happens If You Don't Cover Or Tackle Darren Sproles?"