When the hype is gone: Terrelle Pryor and the Oakland Raiders

Terrelle Pryor has been a lot of things to a lot people through the years. For once, fans seem to be content to let him be a damn good football player.

Share All sharing options for: When the hype is gone: Terrelle Pryor and the Oakland Raiders

Terrelle Pryor pulled out of the parking lot at Ohio State's football facility in a sports car with dealer tags, took a fast right on red and began the next chapter. Days later, he announced he would be foregoing his senior season with the Buckeyes to enter the NFL, leaving behind unanswered questions amid a scandal that involved handouts for autographs, tattoos for memorabilia and perhaps a free car or two.

Pryor has been a lot of things at various points in his career. He entered Ohio State as the most prized player in the country, later drew the ire of fans and was hastily called a draft bust. After a promising few games in his third season with the Raiders, the truth is we still don't know exactly who Pryor is, though the answer is likely much more nuanced than many have been willing to concede.

Pryor missed the 2011 NFL Draft by two months. He was the only player selected in the Supplemental Draft in July, falling to the Oakland Raiders in the third round to form a partnership that seemed fitting. He was the last pick that owner/general manager Al Davis ever made before he passed away two months later. The man who built a franchise on the backs of mercurial talent took one of the most polarizing players in football as one of his final hurrahs. 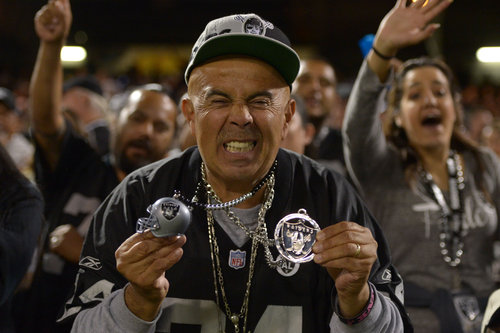 We're back to help you figure out which games this week are worth watching and which ones to avoid. Welcome to the Watchability Index.

Sports Illustrated called Pryor's 2008 National Signing Day announcement the most anticipated in history. He was ranked as the top high school football player in the country by Rivals.com, his value was aided by the recent success of dual threat quarterbacks like Dennis Dixon, Pat White and Vince Young. Comparisons to Young were most prevalent. Both were big and tall with cannon arms and sprinter speed, only Pryor was more physically developed coming out of high school. He was ahead of the curve, and had the potential to surpass what Young did in his Heisman runner-up season as a result.

Pryor fulfilled the hype as a true freshman, passing for 1,311 yards, and 12 touchdowns to just four interceptions, and adding 631 yards and six touchdowns on the ground. He even led an impressive last minute drive on the road against Wisconsin, which he capped with a loping 11-yard run into the end zone. At 10-2, the Buckeyes earned a bid to the 2009 Fiesta Bowl against Texas.

Then the Buckeyes suffered a 24-21 loss to the Longhorns in a game that Luke Zimmerman at Land-Grant Holy Land called "perhaps the first glimpse at Pryor's mortality." Pryor struggled from the outset, enough that Jim Tressel went to a platoon at quarterback, putting Pryor in on running plays and substituting a nervy Todd Boeckman in on passing plays.

Pryor was criticized for seesaw play the next two seasons. In truth, he played exceptionally well by any normal standard, but for a top recruit and a potential Heisman winner, his consistency was lacking. He threw 18 touchdowns to 11 interceptions during his sophomore season, and though he was still dynamo on the ground, the game against Texas proved he could be rattled.

Pryor went 31-4 at Ohio State, taking his team to the brink of greatness without achieving the zenith. From year to year, he didn't improve like Buckeye fans had hoped, too often appearing to have taken two steps forward only take one big step back.

Pryor provided a glimpse of promise for his senior season, racking up 336 total yards of offense in a win over Arkansas in the Sugar Bowl, but the MVP performance would be Pryor's last in an Ohio State uniform.

Scandal and the Raiders

Seven months after the Buckeyes' Sugar Bowl victory, the game was struck from existence. Six players, Pryor chief among them, were found to have sold memorabilia to a Columbus tattoo parlor owner. In Dec. 2010, Pryor and Co. were handed five-game suspensions (to begin with the start of the 2011 season), and in January unearthed emails revealed that Tressel concealed knowledge of his players' actions.

Tressel resigned on May 30 and a week later Pryor announced his intention to enter the NFL, "in the best interests of my teammates." The next day, July 8, 2011, Ohio State agreed to vacate the 2010 season.

The quarterback's name was frequently attached to the Raiders immediately after his announcement to leave college. Jason Campbell was entering a contract year with no heir apparent, and Pryor was the sort of freak athlete that Davis typically sought, often to mixed results (See: McClain, Rolando; Russell, JaMarcus; Gallery, Robert; Marinovich, Todd).

Pryor needed to prove himself NFL worthy, however, and his Pro Day did little to convince scouts. Pryor's athleticism shined -- one 40-yard dash attempt reportedly measured in the 4.3-second range -- but Pryor's passing was erratic. Throwing to uncovered former NFL players, he went 27-for-39 passing.

Three years after he held college coaches in bated breath for seven weeks, Pryor was desperate for approval. NFL Draft experts gave Pryor little chance of playing quarterback in the NFL. Scouts like Mel Kiper and Todd McShay suggested he try his luck at wideout, or head to the UFL or CFL if he was set on playing under center. Pryor's future seemed dim. Naturally, the Raiders took no heed.

Pryor recalled Davis as one of his staunchest supporters.

"It comes to me every now and then that I was the last draft pick of Mr. Davis," Pryor said. "Before he passed away, he would call me and he'd be like, he'd say my name and then say, 'I believe in you. This year is going to be tough for you, but I believe in you for the future.' ... Knowing that he believed in me just pushes me more."

Two years hence, and it appears that Pryor is on track to prove Davis right. Last Sunday against the San Diego Chargers, he had perhaps the most impressive passing day of his career, completing 18-of-23 of his passes (78 percent) for 221 yards two touchdowns and zero turnovers, numbers that solidify Pryor as a bona fide NFL starter if he can replicate them consistently. His season numbers -- 68 percent completion percentage, 845 yards, four touchdowns and two interceptions -- suggest hope. 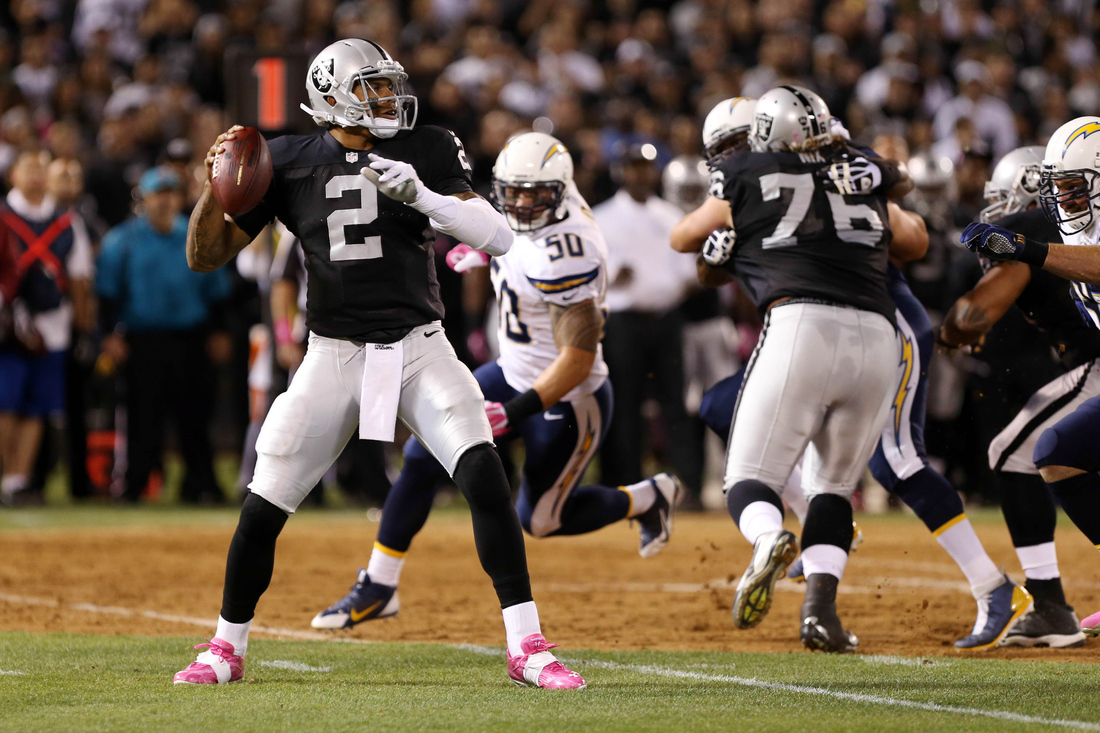 Pryor was dubbed "LeBron in cleats" by the time he first stepped on campus in Columbus. There was never a doubt that he would be leading the Buckeyes' offense sooner than later. The bigger question was whether he could live up to the standards forced upon him. Not only did Pryor fall just short, but it seemed as if he had no intention of looking back as Ohio State fell under the thumb of the NCAA. His parting shot was a pair of tail lights whipping into an intersection towards the dark.

There was nothing inevitable about Pryor making the Raiders' roster, much less becoming a  starter. The team would not have taken a gamble on Pryor if it didn't see potential, sure, but the investment was cheap at $2.36 million over four years, with a $590,000 signing bonus.

Without expectations and the accompanying scrutiny, new narratives emerged. Last season, Pryor volunteered support to Carson Palmer when the veteran was blamed for the Raiders' late season losses. He was simultaneously contrite and confident after struggling during his first career start, a 24-21 loss to the Chargers. This past offseason, Pryor openly expressed his love for the game, waxing humbly about Tom Brady's quick drop-step, RG3's ball fakes and the "fun" of learning how to beat an NFL defense. We saw Pryor as a player and teammate, no more and no less.

Pryor has done the right things since joining the Raiders, and in the process opened himself to new interpretations. He was no longer a pre-packaged superstar, but a damn good football player, one who was considered one of the best presumably because he put in the work. Pryor found perhaps the perfect home in Oakland, where anti-heroes are embraced and expectations have been tempered to manageable levels.

Pryor won his first career NFL game on Sept. 15, leading the Raiders to a 19-9 win over the Jacksonville Jaguars. After the game, the Columbus Dispatch asked him about Ohio Sate:

"That's my school, but they don't really accept me," Pryor said. "I've moved on to what I have now, and that's just football."

Perhaps it always should have been "just football" for Pryor, but that's not how it worked out. He may never be judged without pretense, but his current gig feels like the new start he needed. Pryor could star in the NFL or he could flame out. More likely he will fall somewhere in between. At least, for once, it feels as if fans are willing to accept Pryor for the player he is, whoever that may be.

• Can the Ravens rattle Aaron Rodgers?