RGIII went 2-0 and put up big numbers against the Cowboys in his rookie season. Coming out of the Redskins' bye week, can he repeat that success on Sunday in Dallas?

The 1-3 Washington Redskins emerge from their bye week looking to turn around a disappointing start to 2013 and hoping that a healthy Robert Griffin III has shaken off the lingering injury concerns that have hampered him through four games. Drawing the Dallas Cowboys, against whom RGIII has performed exceptionally well in his young career, could be the jump start they need.

RGIII won both of his matchups against the Cowboys during his rookie season, putting up impressive numbers along the way. He was spectacular in Dallas last Thanksgiving, throwing for 304 yards, four touchdowns and one pick in the Redskins' 38-31 win. In his first game back in Texas since his Heisman Trophy-winning junior campaign at Baylor, Griffin threw three second-quarter touchdowns to give the Redskins a 28-3 lead heading into halftime. He finished with a 70 percent completion rate and a QBR of 88.5.

His performance in Washington's 28-18 NFC East-clinching win at home to close the season was a bit more pedestrian. With Alfred Morris exploding for over 200 yards rushing and three touchdowns and the Redskins holding a lead for the entire second half, the team simply needed RGIII to avoid mistakes, which he did. His lack of a passing touchdown was supplemented by his zero turnovers, and he finished a solid, if mundane, 9-of-18 for 100 yards through the air. He did contribute to the Redskins' 274-yard day on the ground, going for 63 yards on just six carries and a rushing touchdown. 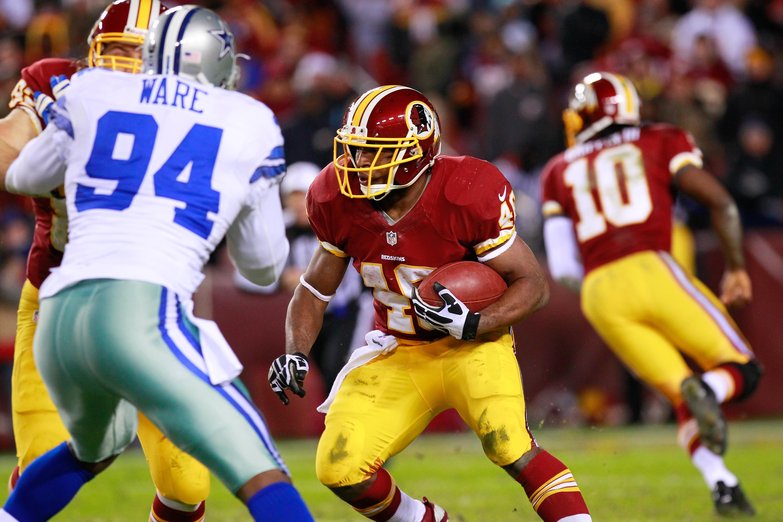 Hogs Haven takes a look at the front seven the Redskins will face Sunday in Dallas.

Unfortunately for Washington, the quarterback phenom has not exhibited that same playmaking ability since undergoing offseason knee surgery to repair a torn ACL. Hampered by lingering medical concerns and a bulky knee brace, he has lacked the explosiveness he used to dominate the Cowboys in 2012. Through four games this season, he has thrown only six touchdowns to four interceptions and sports a lowly QBR of 29.1. The injury has clearly shaken his confidence as a runner -- he's gone over 24 yards rushing in just one game this season and last year's 6.8 yards per carry is down to 4.0.

Unfortunately for the Cowboys, their defense has also regressed since last season, at least against the pass. After finishing 19th in the league in pass defense in 2012, they currently sit at second-to-last and are surrendering 326 passing yards per game. In fairness, that number is inflated after last week's 414-yard day from Peyton Manning, who is putting up those types of numbers against everybody.

Dallas's pass rush has improved this season, though, meaning RGIII's mobility and scrambling ability could be a key to success. If he can move with confidence on his surgically repaired knee, there will be plenty of holes in the Dallas secondary to be found.

And with a win, the Redskins could find themselves, incredibly, on top of the NFC East.

• Can the Ravens rattle Aaron Rodgers?