It just wouldn't be Philadelphia without a quarterback controversy.

But for top-to-bottom drama and intrigue at the quarterback position, the NFC East leaves everyone else in the dust.

Eli Manning is starring in an off-Broadway production of Oedipus Rex. No, he hasn't been casting any glances at Olivia, but he's suffering from an otherworldly combination of capricious Fate (dire blocking, Rueben Randle whimsy on hot routes) and his own tragic flaws (rifling 50/50 balls on every other possession).

Robert Griffin III looked about 85-percent weaponized against the Cowboys on Sunday night, but his slow start may have dug the Skins too deep a hole ... unless he's able to recreate last season's dramatic return from three games back in the division race.

And finally in Philly, Michael Vick has led an explosive offense and while carrying more than one fantasy team to a 5-0 start ... and may find himself on the bench? What gives?

What gives is the play of second-year QB Nick Foles, who has shown poise and proficiency beyond his years in guiding Philly to a 2-0 record in the two games where he's seen significant playing time. QB "wins" are a problematic stat -- especially when Foles and Vick basically divvied up the Giants game between them -- but both the eyeball test and a deeper statistical dive suggest that Foles may stake a strong claim to the starting gig.

Be warned: We're reaching the part of the article where there's a paucity of data and the mapmaker has scrawled "here be small sample sizes" along the margin. But an entire NFL season is somewhat of a small sample size. Since we've all collectively agreed not to just do other things for three months and reconvene to talk football after the Super Bowl is over, let's dive on in.

Vick vs. Foles: The eyeball test

Mike Vick is Mike Vick -- if you didn't know any better, you'd think you were watching him in his age-25 season. That arm is live as ever, capable of uncorking Powerade Throws at any moment. He might have lost a smidgen of a step at this point, but hey, this man had a step to lose. He's still the position's most devastating open-field runner, and only Cam Newton's Grond impersonation is scarier at the goal line.

Vick can drop a ball on the dot 50 yards downfield, and he can sail the ball over his receiver's head on a wide-open curl route -- just like his age-25 season. That come-and-go accuracy has been one of the banes of Vick's career, and his propensity to self-sack on madcap scrambles has been the other. A coach who has famously decreed that "every sack is the quarterback's fault" won't be jiggling with joy at that sort of tendency.

And what of Foles?

Let's get the athleticism piece out of the way off the bat. Vick can run circles around Foles now, and will probably be able to do so five or 10 or 20 years from now. Although Foles isn't carved from granite (*cough Mike Glennon cough*) -- he's got plenty of zip to take a soft corner on a read-option keep or punish a sleeping defense on a QB draw. More importantly, he's got the feet and athleticism (and awareness) to slide away from pocket pressure and either keep a play alive or throw the ball away to avoid a sack.

In his limited run this season, Foles has already shown some quality stuff as a passer. He had good poise to get an under-duress screen pass to Brent Celek in the second quarter of the Bucs game while also demonstrating patience and accuracy to nail DeSean Jackson for a crossing back-line TD. Foles has plenty of arm to punish defenses vertically, and he showed great placement and touch on his fourth-quarter post to Jackson. Riley Cooper had to wait a bit on Foles' throw on his 47-yard scoring bomb, but when a big receiver has a corner trailing him in scramble mode, the last thing you want to do is overthrow him. Foles put the ball where a play could be made, and Cooper made it.

There's no question that Mike Vick adds more punch to the Philly ground attack, but he's by no means indispensable to its success. During Kelly's tenure as OC and head coach at Oregon, the quarterback position accounted for 20.5 percent of the team's carries and 18.8 percent of the total rushing yards -- a substantive piece, but tailbacks and scatty sweepers like Kenjon Barner still did the bulk of the heavy lifting. Even a moderately athletic QB can create defensive hesitation and open cutback lanes for the back in a read-option look, and read option is only one component of the Chip Kelly ground attack. In fact, the entire reason you hire Chip Kelly is to employ a diverse and creative run game. The Eagles' ground game will be fine with a tremendously athletic offensive line and Shady McCoy in the backfield, as McCoy's 25/116 line against the Buccaneers demonstrated.

What Kelly CAN'T do is walk out onto the field and put the ball in the hands of an open receiver on third-and-8. And when it comes to making plays from behind the chains, Nick Foles may have a leg up on Vick.

We've spoken of successful plays in this space before -- the concept that a play that gains 40 percent of the required yardage on first down, 60 percent of it on second down and creates a conversion on third down is a "successful" one. Good successful play percentage keeps your offense ahead of the chains and going strong, but even the best offenses frequently find themselves behind the chains. That's when the pressure ratchets up on the quarterback to make a play, and so far in 2013, Nick Foles has been ahead of the curve when the Eagles get behind the chains.

The chart below shows Vick and Foles' numbers on "behind the chains'" plays -- any time they ran or passed when the Eagles faced first and longer than 15 yards, second and longer than 6, or third and longer than 3. The definition of "successful plays" on this chart is the same as above -- gaining the requisite yardage based on down and distance. 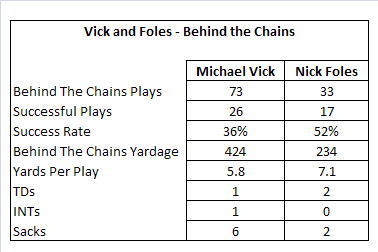 Again, small sample size warning, but Foles' stats match up well with what the eyeball test seems to indicate. He's got the accuracy to hit guys down the field as well as the savvy to avoid negatives like sacks and interceptions. Behind-the-chains success has been Vick's biggest downfall, so it's very possible that Foles could offer the Eagles a better chance to sustain drives in tough moments.

Ah, but what about their success on first-and-10 and other "ahead of the chains" situations like second- and third-and-short? In a run-first, up-tempo assault like Kelly's, you could make an argument that it's important for the QB to help get the offense ahead of the chains in the first place and to punish defenses in advantageous situations. If Vick has a clear advantage in those situations, it could mitigate a long-yardage deficiency. Let's see: 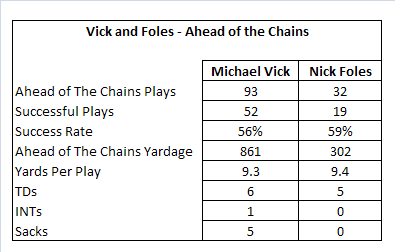 Small sample size yet again, but ... closer than you would have guessed, yes? The difference in most of those numbers is whisker-thin (though on a per-play basis, Foles' TD rate is awesome), but that ahead-of-the-chains sack number has to be top of mind for Chip Kelly. Those kinds of negative plays in positive situations are anathema to Kelly's offensive approach, and Vick's long and sack-heavy history makes him a poor bet to suddenly get sack-avoidance religion at this point in his career.

Everyone involved seems eager to play it safe with Vick's strained hamstring, so Foles should get another chance to state his case against the Cowboys next Sunday. Dallas' clownshoes secondary should provide plenty of opportunities for big plays, while the Eagles' own defensive foibles will make high-efficiency offense a must if Philly wants to walk out with a win. If Foles can keep generating success on both sides of the chains, even a healthy hammy might not let Vick regain his starting gig.