Minnesota is going in a third direction, the Eagles may have found a franchise QB, and the Bills continue to scramble. That and more on this week's QB watch!

The QB carousel never takes a break, and it continued to spin like mad again in Week 7. The Vikings wasted no time in starting their newest acquisition, but will he do any better for a team that might be equally as bad, if not worse, than his old team?

Also, controversies heat up in Philadelphia and Houston and Buffalo continues to grasp at straws for any solution to their bad luck string of injuries.

At 1-4 Minnesota may not be trying to salvage its season, but the Vikings are trying to see if they can salvage Freeman. Are 29 starts enough to really know that Christian Ponder has no future? Maybe not, but he doesn't appear to have a future with the Vikings anymore. 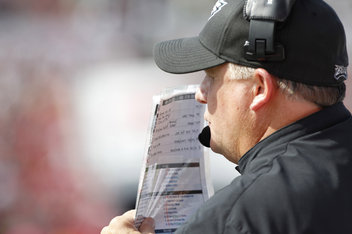 Another interesting aspect of the Freeman situation is that it likely puts Ponder on the open market soon. Would a team like Jacksonville possibly consider signing Ponder and drafting Jadeveon Clowney, passing up the opportunity to draft Teddy Bridgewater?

There will be plenty of teams calling Ponder to be a backup or even compete to start. He wouldn't be the first QB to start out terrible and go on to have a good -- and sometimes great -- career.

Ryan Fitzpatrick's 53 starts are the most of any of the other 11 QBs during that stretch, and now he's struggling to breathe air in Tennessee, where the only Music City Miracle today would be a time machine to go back and keep Jake Locker healthier.

For now, E.J. Manuel seems like he's got a great shot to keep the seat for awhile (did we say similar things about Rob Johnson, JP Losman, Trent Edwards, and Fitzpatrick?) but he's not healthy enough to do that this week. Lewis injured his foot and he may not be healthy enough either. They signed Matt Flynn this week as insurance, but wow what a crappy insurance plan.

In his limited time with the Raiders this season, Flynn posted a QBR of 3.1.

That's not a typo or a version of some software program! There have been 12 starters for Buffalo in the last 17 years and it seems like with Jeff Tuel in the mix, they could start 12 more this year alone.

Cheers: A place where everybody boos your name

Right now it seems like the only difference between the Giants' disaster and the Texans is that Houston won its first two games at the last second. Since then, the Texans have looked every bit as bad as New York.

One of the most phenomenal stats I've seen this year: The Texans are first in total defense and 28th in scoring defense. With 11 interceptions and seven fumbles in six games, teams are able to start with short fields and score or just return a Schaub interception straight for a touchdown and save some time.

No one player is ever the only problem on a team, but Schaub comes close to being a singular inhibitor to success. The issue is that Yates is probably worse, and he displayed that worse-ness to full effect on Sunday when he threw interceptions on consecutive drives.

Third QBs are rarely used and often not even kept on the 53-man roster anymore, but unbelievably, Case Keenum could be named starter without anyone in front of him getting severely injured. That's how bad things have gotten.

This week's test is only the No. 1 passing defense in the NFL.

UPDATE: In a "Roy McElroy swing for the fences with nothing to lose" move, Gary Kubiak has announced that Keenum will start this week against the Chiefs. Oh boy.

Everything we think we know about a Chip Kelly offense would appear to work better around Michael Vick, and indeed he was enjoying a successful season before getting injured. But Foles has been even better.

According to Football Outsiders advanced stats, Foles skyrocketed up to No. 1 in DVOA and No. 2 in QBR. He was basically Peyton Manning last week.

Small sample size caveats apply, but with two straight wins, Kelly isn't taking Foles out until he plays himself out. That doesn't seem likely to happen soon.