What kind of trade offer would it take to pull Josh Gordon from the hands of the Cleveland Browns and what teams might be willing to make that kind of deal?

When the Cleveland Browns traded away running back Trent Richardson, many believed it would be the beginning of a fire sale that would eventually include a deal to send away wide receiver Josh Gordon. With the trade deadline just a week away (Oct. 29 at 4 p.m. ET), Gordon remains on the roster, but it's not for a lack of offers, as ESPN's Adam Schefter reports at least three teams have standing offers for the second-year receiver, including two offers that include a high draft pick and a player.

More: For extended coverage of the Browns, visit Dawgs By Nature

Of course, it's tough to truly determine the worth of said offers, as a "high pick and a player" can represent several degrees of value. There's a steep difference between a first-round pick and second-round pick, just as there is a big difference between a second and a third. Also, the Browns would logically only be interested in adding a player via trade if they believe that player could be a piece of their rebuild.

Therein lies the problem, as Gordon, 22, is a young, ascending player that a team like the Browns would seemingly want to protect and work to build around. Still, every player has a certain value to a team and if an offer exceeds that value, the possibility of a trade always exists. As Mike Krupka of SB Nation's Browns blog, Dawgs By Nature, said on Monday night, a trade seems unlikely, but its tough to full rule out an offer sweeping the team off its feet:

I really don't want to see the Browns ship Josh Gordon away and I find it highly unlikely that this happens. But only time will tell if somebody offers a deal worthy of the "value" the Browns perceive Gordon to have.

With a week to go and at least three teams reportedly interested, there are a few guesses that can be made about possible landing spots for Gordon: 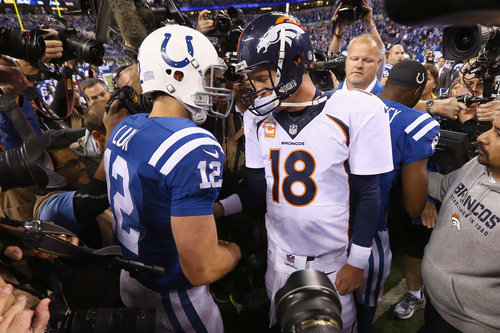 There is one undefeated team left in the NFL, and that one might not even be the best team in the league. But the Week 8 power rankings are all about making sense.

After a slow start to the season, the Panthers have bounced back with three wins in their last four games. With a top 10 defense and the No. 7 rushing attack in the NFL, the pass game of Cam Newton is the team's most deficient area.

However, it's not all on the former-first overall selection, as his 63.5 completion percentage is the highest of his career and he has 10 touchdowns and five interceptions to boot. Newton's 95.0 passer rating ranks in the top 10 of the NFL, but the problem for the team is the lack of an offensive weapon for the young passer to target.

Steve Smith, 34, has been the team's leading receiver for 10 of the last 11 seasons and has the most receptions in 2013 as well, but after the long-time veteran, the Panthers don't have a legitimate starting threat at receiver. Gordon would instantly provide that and make Carolina a postseason threat.

The Colts are the only team in the AFC South with a winning record and, after an impressive Sunday Night Football victory over the previously undefeated Denver Broncos, they look primed to waltz into the postseason for the second time in as many years with Andrew Luck.

Unfortunately for the Colts, that victory over the Broncos came with a price as a torn ACL for wide receiver Reggie Wayne severely damaged the team's passing attack. While T.Y. Hilton is a big play threat for the team, the lack of a playmaker like Wayne opposite him might be a problem for the Colts, a team that has already proven that it is willing to make moves that will benefit the team right away.

Without a first-round pick in the 2014 NFL Draft, the Colts are already without some of the future value necessary to make a big move for Gordon, but the addition of a 22-year-old receiver to work with Luck for the foreseeable future isn't much different than the use of a draft selection anyway.

While the Patriots have earned a reputation for being the most shrewd team in the NFL under Bill Belichick, they have proved on several occasions that they are willing to trade away draft capital to make a big move.

A big move might be necessary for the team too, as Tom Brady has looked increasingly frustrated with his young wide outs every week. Between Julian Edelman, Danny Amendola, Aaron Dobson and Kenbrell Thompkins, the team already has 20 drops of catchable balls from Brady, according to Pro Football Focus.

With five drops from Gordon in 2013, he's not much better in that aspect, but its easier to forgive a player for drops when he has the size and speed to take over a game like he did in Week 3, tallying 10 receptions for 146 yards and a touchdown against the Minnesota Vikings.

• Atlanta wears hazmat suits to clean up after Bucs

• Takeaways from every Week 7 game