Post-Mortem, Week 7: The impossible riddle that is the St. Louis offense

You can't run well. You have Kellen Clemens as your quarterback. What do you do? (Other than punt. We know you're gonna punt plenty.)

Share All sharing options for: Post-Mortem, Week 7: The impossible riddle that is the St. Louis offense

We have reached that point of the season where Bears fans are openly calling for the team to sign Brett Favre and people are monitoring JaMarcus Russell's weight. Crappy quarterback after crappy quarterback has seen playing time this year.

And Brady Quinn still got cut. That's how bad you are, Brady Quinn. General managers would rather figure out ways to trick JaMarcus Russell into eating vegetables than sign you. 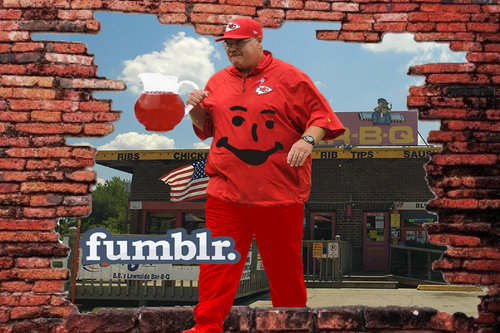 In this week's Fumblr: the Chiefs sit atop the NFL, Peyton gets a turn at Manningface, Greg Schiano is still an ass, and a helpful guide to whether you should mess with Steve Smith.

Time of Death: Mike Glennon's touchdown pass on 4th-and-goal from the 13 would have cut Atlanta's lead to one score with five minutes to play. That touchdown was called back for an illegal use of hands penalty, forcing the Bucs to settle for a field goal and the comforting knowledge that eventually human existence will just cease to be.

Cause of Death: Without his top two wide receivers, Matt Ryan had the most touchdowns, the highest yards per attempt figure, and the second best completion percentage of any game he's played this year. If you're one of the teams that didn't get Tampa on your schedule this year, you should sue the league. America is supposed to be a fair place, dammit.

Time of Death: Mike Nugent's 54-yard field goal as time expired ended what had been an excellent quarterback duel between Matt Stafford and Andy Dalton, a phrase you probably never expected to read or even think.

Cause of Death: Dalton has thrown an interception in 25 of his 41 career starts, and the Bengals have a 12-13 record in those games. When Dalton doesn't throw a pick, as he didn't here, Cincinnati is 12-4. Is that math too simplistic of an explanation? Maybe, but we're not the ones letting Andy Dalton throw for nearly 11 yards per attempt.

Time of Death: You'd think it would be the Buffalo field goal that gave the Bills the lead with less than a minute to play, but Miami ran the kickoff back to its own 44-yard line. Death didn't truly come for the Dolphins until they threw four straight incompletions to blow any chance at a game-winning kick of their own.

Cause of Death: Passing on third down is inevitable and often difficult, but Miami might consider just punting or kneeling or spiking or anything else, because passing on third down in this game yielded this: 11 attempts, four completions (two of which went for negative yardage), one touchdown, two interceptions.

Time of Death: Whenever someone convinced the league to pass Rule 9-1-3, knowing full well that it would screw over the Patriots and deny them the greatness they deserve. That someone? RAY ALLEN.

Cause of Death: In his last three seasons, Tom Brady has finished the year ranked 8th, 2nd, and 5th in yards per passing attempt. Brady only averaged five yards an attempt against the Jets and now sits 30th on this year's list, ahead of only three quarterbacks: Brandon Weeden, Mike Glennon, and Josh Freeman. Tom Brady: Better Than Anyone Schiano Has Or Had.

Time of Death: On the last play of the third quarter, facing third-and-goal from the 9, Nick Foles was sacked and knocked out the game with a concussion, forcing Matt Barkley into action. If you have any decency, do not ask how that went.

Cause of Death: Entering this game, the Eagles only had 12 non-scoring drives that had been stopped in four plays or fewer. Six of their first ten drives against the Cowboys didn't make it to play five.

Cause of Death: The 2012 Chicago Bears allowed only 25 pass plays that went for 25 yards or longer, eighth best in the NFL. After yielding four such plays against the Redskins, the 2013 Bears are on pace to give up 43 long pass plays. This is what happens when you hire a coach who's accustomed to the watered-down yardage value of the CFL.

Time of Death: With 19 seconds left in the third quarter, the Panthers capped off a 73-yard touchdown drive to go up by 15 points.

Cause of Death: The Rams, who only managed 63 yards on 21 carries, remain the only team in the league without a rushing touchdown. Their only 100 yard rushing game came against Jacksonville. They are the least effective team at moving the chains on 3rd down with the run, with an abysmal 20 percent conversion rate.

And now they get to pair that with Kellen Clemens.

Time of Death: Eddie Royal's 27-yard touchdown reception about 19 minutes into the game put the Chargers up by two touchdowns and, no, this year's Jacksonville Jaguars are not ever coming back from a two touchdown deficit.

Cause of Death: Jacksonville's 3-of-11 performance on third down against San Diego was of a piece with the rest of their season; the Jaguars are only converting on 29.6 percent of third downs, and that number drops to 12.5 percent if you just look at third and 6 or more to gain. Third and long is so bad for Jacksonville that they have 4 more sacks allowed first downs picked up.

Time of Death: Halftime, when the Niners went back to the locker room on the plus side of a 17-0 score, a lead only one team has blown this year.

Cause of Death: The Titans were shut out of this game through the first three quarters, and their inability to score in the first 45 minutes is becoming a regular problem, as only 25 percent of Tennessee's drives before the fourth quarter have ended in points. That rate jumps to 45 percent in the last quarter, so the solution seems simple - lie to the players about the game clock.

Time of Death: Down 14 points with over twenty minutes left in the game, the Browns had a first down at the Green Bay 24. They ran three plays, lost two yards, and kicked a field goal, and that should be the dictionary entry for "Norv Turner."

Cause of Death: It's probably not Norv's fault, however, that Brandon Weeden is bad in ways that make you doubt the laws of physics. His first half stat line read as follows: 5/14, 48 yards, one sack for a loss of ten yards, and one interception returned for eleven yards. Math tells us that you could have a worse performance than this. Math is full of shit.

Time of Death: Houston's last opportunity to mount a game-winning drive ended with 94 seconds left, when Case Keenum was sacked and turned the ball over, allowing the Chiefs to run off the rest of the clock.

Cause of Death: What happened to the Texans on third downs in the second half of this game should be classified as a war crime. Six attempts yielded no conversions, four sacks, and a total of NEGATIVE THIRTY-TWO YARDS. That's not a horror film. That's videotaped murder.

Cause of Death: You see this running game, Baltimore? It's missing about five different pieces and leaking oil and gas and some other fluids that don't even belong in a car. It averages a league-worst 2.8 yards per carry. Of the 26 runs it had against Pittsburgh, 10 gained less than two yards, and that's better than your average of 12 runs for a yard or worse in a game, which is also worst in the league. No repair shop should let you take this back out on the street.

Cause of Death: Special teams came through in a major way for the Colts. Besides recovering a fumble on a punt return (which led to an Indianapolis touchdown), the Colts kicked a 52 yard field goal and won field position with punts that gave the Broncos the ball at the 2, the 16, the 10 (no score), and the 15. Denver didn't score on any of those possessions, and that, as much as Hillman's fumble, prevented the comeback.

• Sam Bradford out for the year | Rams working out Brady Quinn, others

• Football Father: A first-hand account of the effects of head trauma