How Steve Smith got the best of Janoris Jenkins

The Panthers veteran receiver lost Janoris Jenkins with a series of quick moves, but the Rams did nothing to help their second-year cornerback.

Share All sharing options for: How Steve Smith got the best of Janoris Jenkins

Steve Smith hasn't had many opportunities in 2013 as the veteran receiver was been stonewalled by inconsistent quarterback play and an offensive scheme that didn't let him get much separation. On Sunday, he took advantage of a poor defensive scheme and an overly-aggressive Janoris Jenkins and had his best game of the season.

Jenkins was put in a losing position at first snap. Too often he was charged with covering Smith in ill-fitting coverage, without adequate safety help. The Rams took two approaches to defending Smith, the first involved giving him too much of a cushion and the second giving him too little.

Early in Sunday's game St. Louis used Trumaine Johnson to cover Smith, which quickly proved to be a mistake. 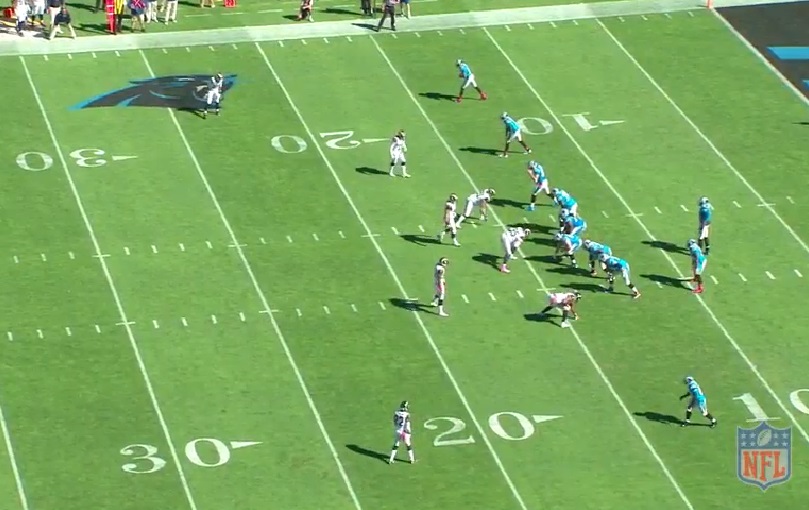 Johnson, is giving Smith a 10-yard cushion. Which is far too much if you've seen tape on Carolina's propensity to throw short underneath routes to set up the long pass. It's clear the defense doesn't want Smith to get outside positioning without safety help, but this becomes an easy underneath route where the linebacker decides to cover Mike Tolbert, while Johnson is left without anyone to cover and and gives Smith an easy first down. 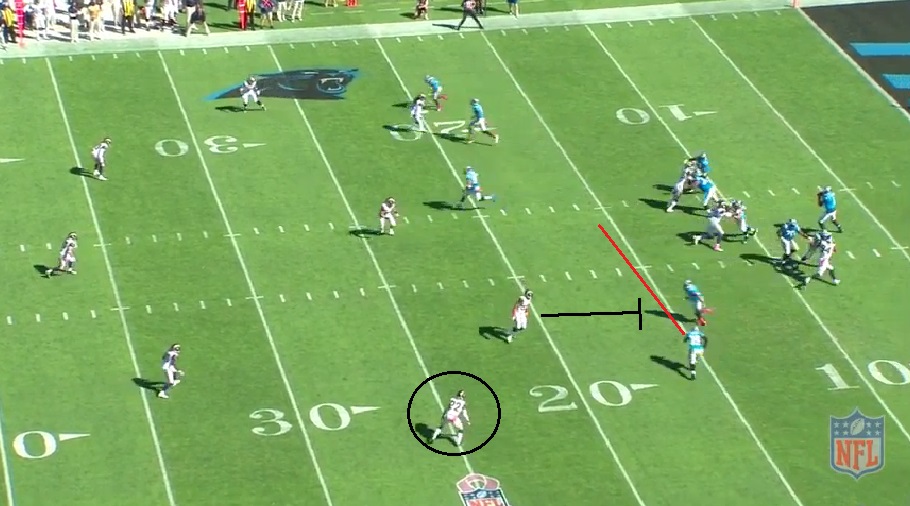 This first catch prompted a change in coverage where Jenkins was shifted to cover Smith while Johnson was tasked with Brandon LaFell, which should have been the matchup from the start of the game.

The Rams make a switch in coverage, but repeat the same mistake on Smith's first catch. Jenkins is giving the receiver a 10-yard cushion, and the Panthers run an almost identical play. 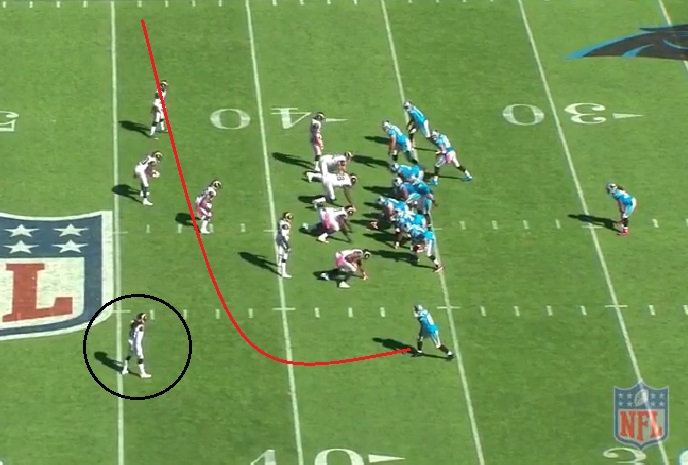 Newton scrambles to his right and finds Steve Smith on the run for an easy gain. Jenkins stays on Smith's route, unlike Trumaine Johnson, but he still finds himself away from the play at the catch. 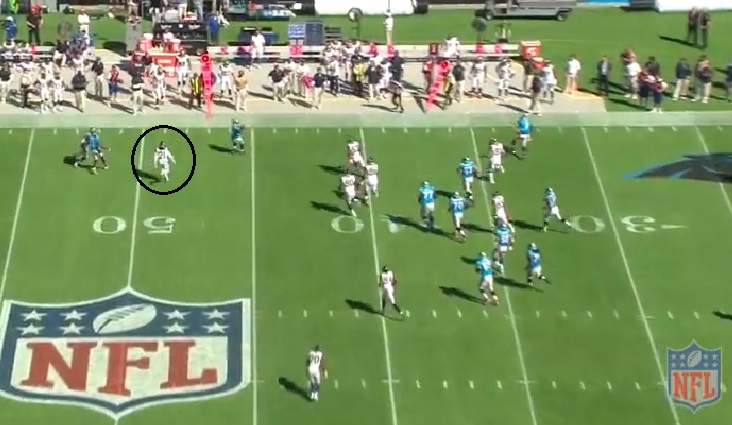 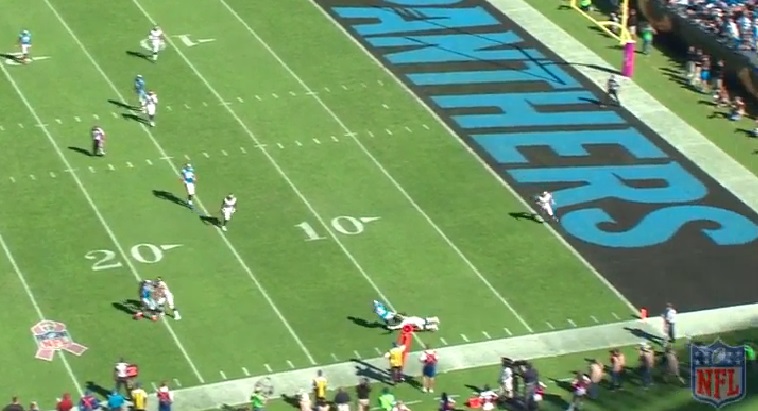 This should have been first down. Jenkins covers Smith well, but allows outside position and slips on the comeback. It's a routine play that the receiver should have made and the cornerback covered, but this was a vital moment in Sunday's game.

After the play Jenkins mocks Smith as the two are standing. The first evidence on film of the jawing between the two that prompted the fight in the third quarter.

Veteran cornerback Cortland Finnegan warned Jenkins before the game about being goaded into a battle of words with Smith, according to Fox sideline reporter Laura Okmin. The second-year DB didn't take notice, reportedly making comments about Smith's family that started the conflict.

There wasn't much complexity to the routes Smith was running, but the Rams had were unwilling to adjust after they pulled Johnson out of coverage in the first quarter. 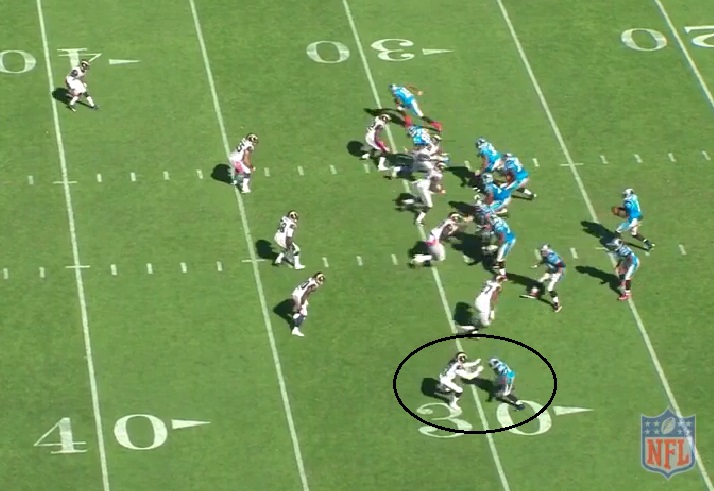 Smith sells the outside move while Jenkins attempts to get hands on the receiver. He isn't able to make contact, which results in Smith getting free release into the center of the field and forces the cornerback to play catchup. 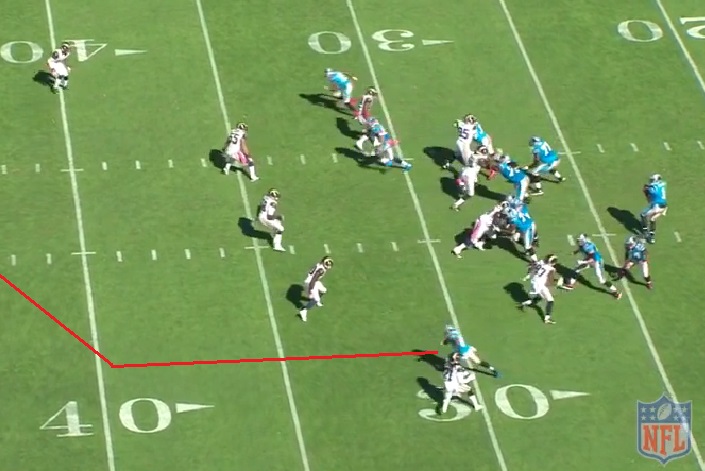 This is a case where safety coverage would have really helped, but there was nobody available as the Rams chose to play one-deep. St. Louis chose to follow a model that hurt the Giants and Vikings in their losses. 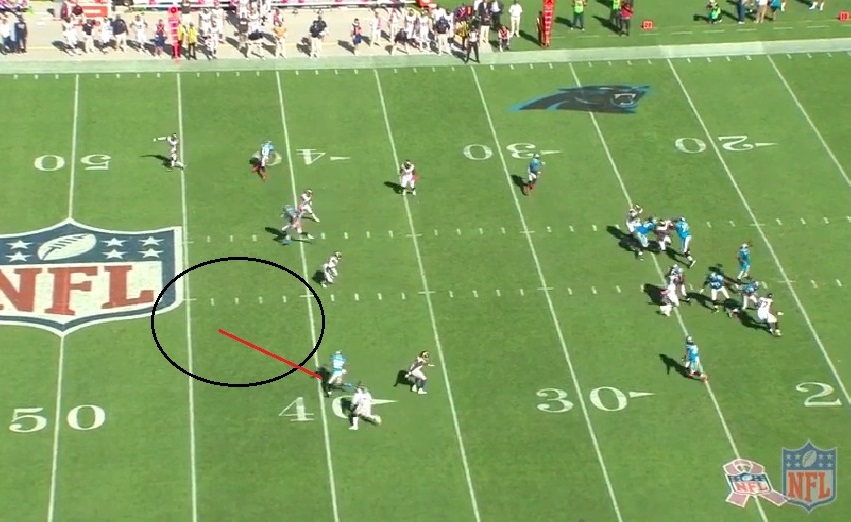 This play is a skinny post, and to Jenkins' credit he's almost able to make a play on the ball, but the pass never would have been thrown if he sticks to Smith rather than buy that initial fake.

Spacing was a consistent issue throughout the game. Jenkins was either asked to play in close man coverage or play too far away from the receiver. He didn't look comfortable playing close — especially after biting on the first few fakes from Smith. He was unable to disrupt the receiver's routes by getting hands on him, giving the veteran too much room at the snap. 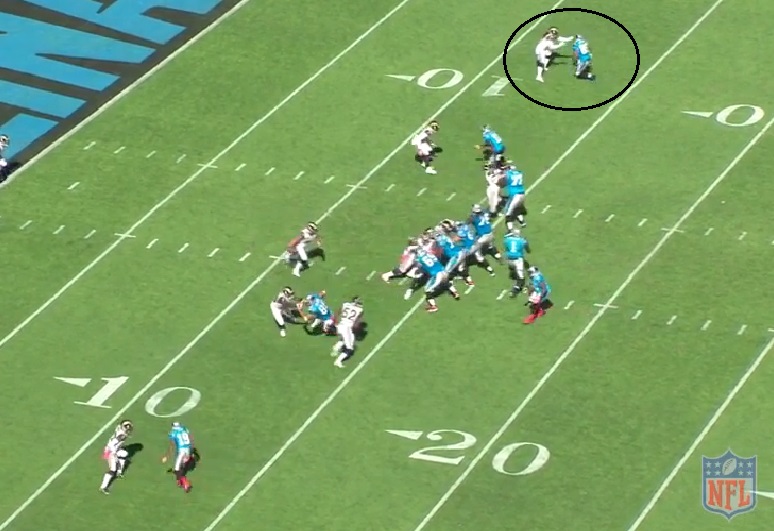 Jenkins is caught flat-footed and tries to engage a block. Smith shifts his weight inside and loses him after the snap. 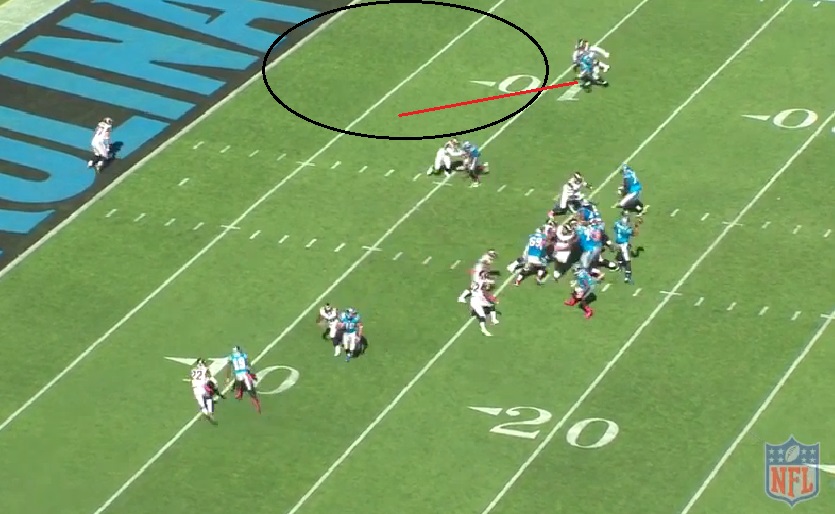 St. Louis is once again sitting in one deep coverage, and it's clear how much field the Rams are conceding to Smith. The lack of adjustment didn't make any sense and allowed Cam Newton to have the most accurate game of his career.

A key moment happened before the vital touchdown that sealed the victory for Carolina. After the snap Smith gets away with a shove to the face on Jenkins when both players were out of the play. This should have been a personal foul for unnecessary roughness, but referees missed the call. 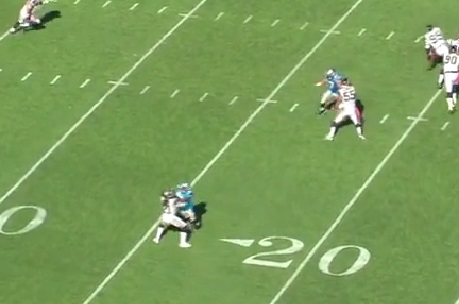 The Panthers' receiver has characterized the game as him being disrespected by a young receiver, but it's clear that blame went both ways. The veteran stretched every rule in an effort to prompt retaliation, something that got inside Jenkins' head on the following play. 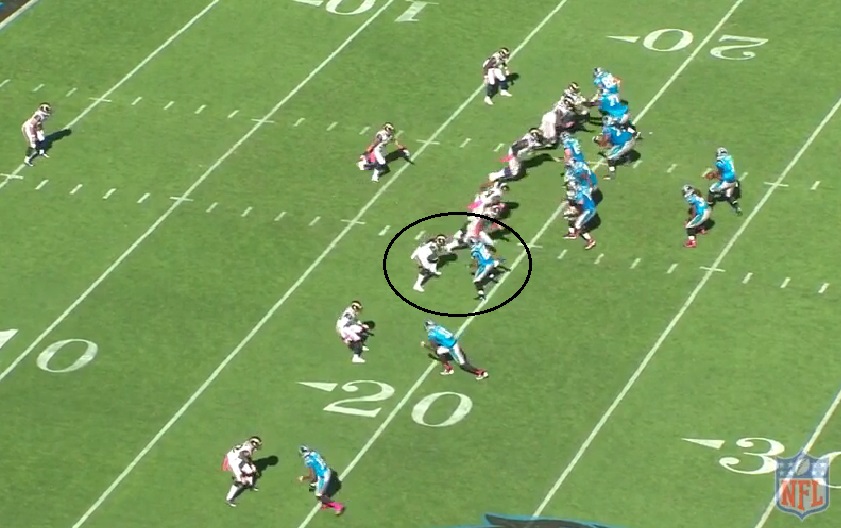 Jenkins is lost on the first move again, this time another inside cut that forces him out of position. The key problem is rounded coverage, where the defensive back loses Smith's position as he's concentrating too much on Cam Newton. This allowed a 2-yard buffer for Smith who has open space at the 6 yard line. 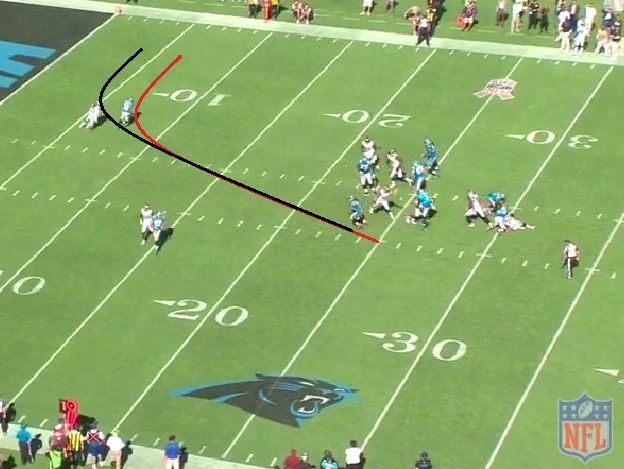 From here it's about simply making the tackle, something Jenkins should have done. He attempts an arm tackle, which misses, and Smith gets an easy touchdown. 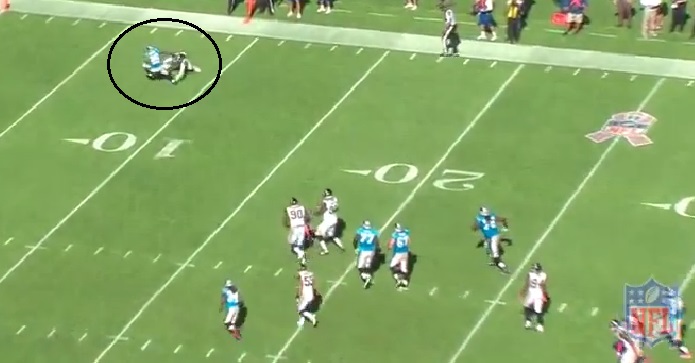 There's no question Janoris Jenkins was over-matched against Steve Smith. The second-year corner is talented, but fell to quick-twitch moves at the line of scrimmage that young defensive backs tend to struggle with. If Cortland Finnegan played, this could have been a different story (or a very similar one). However, most the blame goes to the Rams' defensive coaching staff.

Jenkins' inability to cover Smith was endemic. No adjustments were made to either rotate defensive backs or put a safety over the top to help him. The Rams allowed Carolina to dictate the tone by over-committing to stop the running game by playing a safety in the box, putting Jenkins on an island.

In many ways Sunday's game was similar to a game between Carolina and Arizona in 2011, when Steve Smith used the same kind of feints to confuse Patrick Peterson. Smith is often overlooked when it comes to the discussion about the game's top receivers. Former Buccaneers cornerback Ronde Barber called him "the hardest player he had to cover" in a radio interview from 2012, meaning there's no reason for a young player to be ashamed.

That being said, these plays for Smith can become a blueprint for teams to follow against the Rams with Finnegan out. The defensive staff has to do a better job of giving their corners support against quick-twitch receivers, especially with the potential of Percy Harvin seeing the field in week eight, followed by Kendall Wright and T.Y. Hilton.

• Atlanta wears hazmat suits to clean up after Bucs

• Takeaways from every Week 7 game