Everything you ever wanted to know about the zone blitz

How do you stop an NFL air assault? Danny Kelly takes us to the film room to explain how the best defensive coordinators get creative with pass rushing schemes like the zone blitz.

Share All sharing options for: Everything you ever wanted to know about the zone blitz

In the modern NFL, getting to the quarterback with a standard four-man pass rush is tougher than it used to be. Teams have adopted more sophisticated systems & schemes for protection, offensive linemen are bigger and more athletic, offenses are spreading things out and the quarterback position seems to be slowly evolving to feature more agile athletes capable of getting out of the way of oncoming defenders with their legs.

It's difficult for any coach to assume that they can rely on superior talent on the defensive line to beat inferior talent on the offensive line, so coordinators have adapted. They've reached into their bag of tricks and designed creative ways to manufacture sacks through confusion and misdirection. In theory, teams don't need $10 million-per-year superstars on both sides of your line. Teams need excellent athletes and smart schematics, and they need to confuse the offensive line and quarterback.

One of the most popular ways to generate pressure without completely selling out to get to the quarterback is the zone blitz. Zone blitzes are popular because they're relatively safe, protecting against the deep bomb with six defenders in pass coverage while still hurrying or hitting the opposing QB with five rushers.

As Chris Brown put it so eloquently in the New York Times,

For as long as defenses have played zone defense (a long time), there have been zone blitzes. Defenders have long tried to occupy pass blockers by faking a rush and backing out into a zone, which, if done correctly, can result in the defense having a true victory: a free, unblocked pass rusher, while the offense has one or more guys not blocking anyone at all. But it is also true that defenses have become increasingly athletic, and so the zone blitz is more popular - and potent - than ever.

To illustrate some ways that coordinators have drawn up zone blitz pressure packages, I thought I'd look at the tape from Week 7.

First up, the Browns.

The Browns are a great teacher if you're looking to learn about zone blitzing. Ray Horton, Cleveland's defensive coordinator, was mentored by Dick LeBeau during their time together in Pittsburgh. That's significant because LeBeau is the man that popularized the zone blitz in the NFL throughout the 90s. He changed things with the "Blitzburgh" Steelers and his concepts are now used by pretty much every NFL team. Horton's style, much like that of Lebeau's from what I understand, is particularly aggressive as he sends blitzers from all over the place with great frequency.

First off, let's talk about protection. You hear quarterbacks talk about it all the time (it's important to their health) and you'll often see them standing up or walking back toward the line, pointing out potential blitzers or identifying the middle linebacker in order to get the offensive linemen all on the same page.

Before the ball is snapped, each offensive lineman, tight end and running back need to know their assignment in pass blocking. In the case below, Green Bay doesn't have a tight end in the box so Aaron Rodgers has six blockers at his disposal - the five offensive linemen and the running back, Eddie Lacy, to his right.

Rodgers' difficult job is to set protections based on what the defense is showing and communicate those responsibilities to his line and running back. Problem is, human beings have free will and move around a lot and tend to do inconsiderate and unpredictable things.

Check out how Cleveland aligns prior to the snap. It's a balanced look, six men in the box to counter Green Bay's four-wide formation. It's 3rd and 10, so they're assuming, rightly, that the Packers will be passing, so they've designed their defense to defend that. 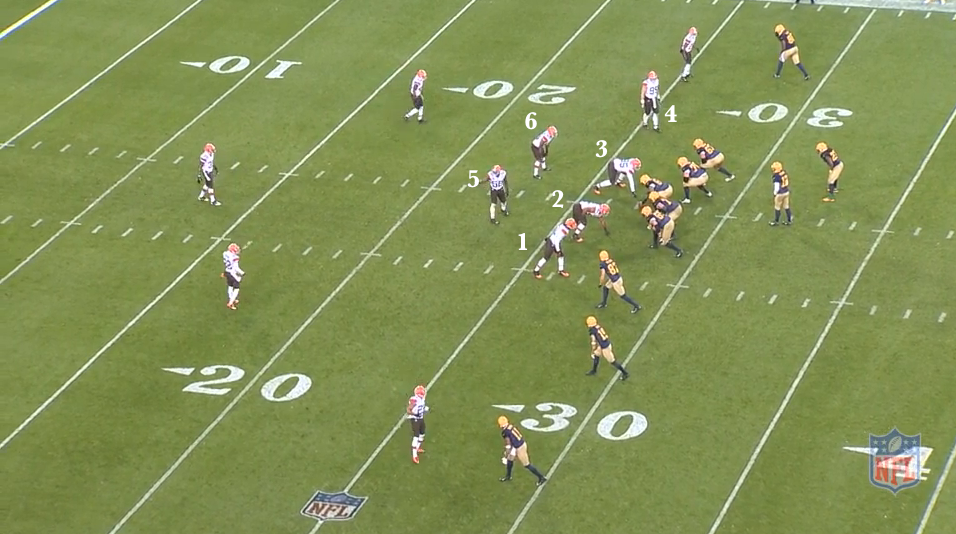 With this balanced six-man front, the Packers set their protections tilted to the left and Lacy will be responsible for any linebacker that comes through the line.

At the snap, look what happens in the box. Two defenders on the left side bail -- outside linebacker Barkevious Mingo sprints to the flats to take away throws to that area and the middle linebacker, D'Qwell Jackson, runs down the seam with the Packers' inside slot receiver. 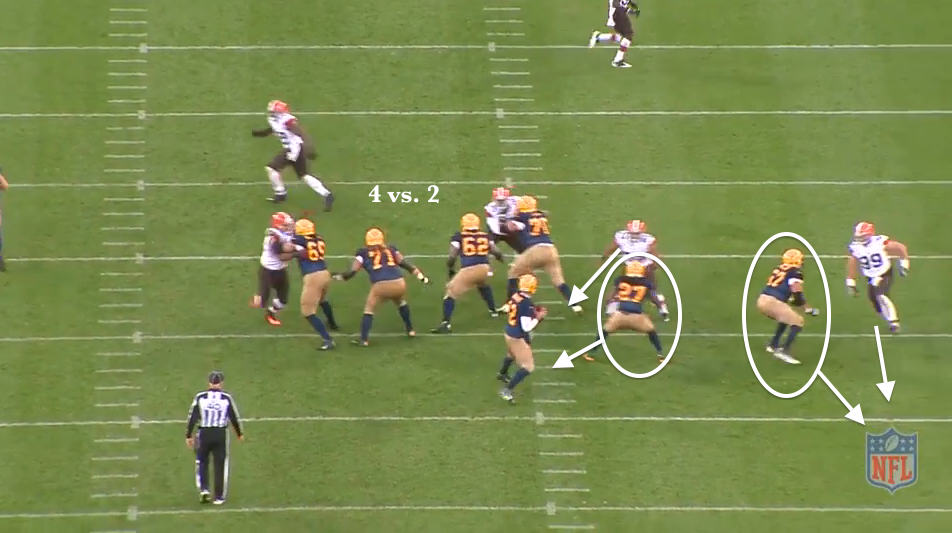 Four offensive linemen stacked together blocking two Browns' defenders on the left, with a rushing middle linebacker to the right getting picked up by Lacy. On the outside to the right, Green Bay's RT takes on defensive end Paul Kruger, who somewhat lazily jogs upfield in 'pass rush'. This is by design. Watch below:

Cornerback Chris Owens blitzes from the short side of the field. The safety to that side, T.J. Ward, moves to cover Owens' receiver on the outside and you can see above how the Browns 'rotate' their personnel to make sure each zone is occupied by a defender hence the "zone" blitz.

The brilliant part of this design is the interplay between Paul Kruger, Craig Robertson and Chris Owens. Kruger and Robertson pave a pathway for Owens to run through unscathed as Kruger pulls the RT to the outside and Robertson pulls Lacy up toward the line in blitz pickup, leaving a hole between them.

Importantly, look at the coverage in the secondary - Rodgers doesn't have an outlet or a hot read, because the Browns blanket all his options. 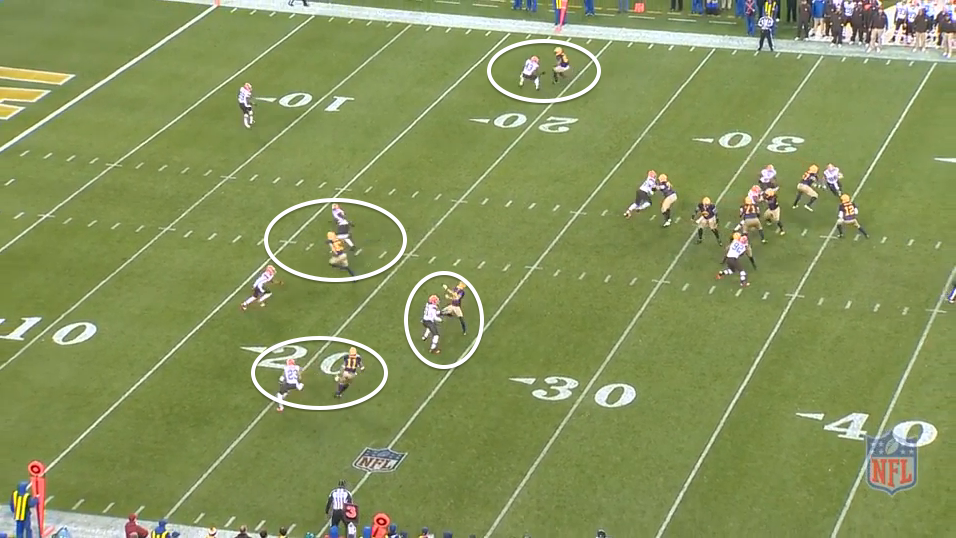 The Browns are currently 8th in the NFL with 20 sacks through seven games.

The Kansas City Chiefs, speaking of sacks, are first in the NFL and have already racked up 35 of their own.

Here are two from this week.

I don't envy Case Keenum in this situation, because he came in to start his first game in a pretty tough situation against one of the best defenses in the NFL (if not THE best). He held his own, but as the game ventured into the fourth quarter with a very tight score, Kansas City dialed up some pressure packages that really worked.

In the case below, it's third-and-nine. Kansas City starts out in what looks like a standard dime defensive look. Brandon Flowers is in the slot over the top of tight end Garrett Graham at first but, right before the snap, he sneaks up to the line right behind Tamba Hali.

As Flowers blitzes, the safety behind him moves up to take his spot in the zone blitz (looks like man-coverage on the outside). He's responsible for taking away the hot read. Houston running back Ben Tate either doesn't have blitz pickup responsibility or doesn't see Flowers and he releases outside on a short angle route. Keenum doesn't see him though, as Flowers is so quick to close. Sack, loss of six, defensive stop.

On thier next possession, Houston finds themselves in a third-and-eight situation and the Chiefs respond with another creative "blitz".

I use quotations on the word "blitz" because, technically, Kansas City only rushes four here. However, they send five very briefly at the start, so for the purposes of altering and affecting Houston's pass protection, it's a five-man blitz.

The Chiefs meander to the line, milling about at first before settling on a spot, and all the movement makes it tough for Keenum to set the correct protections. In this case, he fails to assign enough protection to the overloaded right side of his line. Due to that, he gets sacked, and loses the ball in the process.

Watching from the endzone view, KC has four potential pass rushers on the right side of the offensive line and Houston only has three in for protection so Keenum sends Tate out to the wing on his left.

For whatever reason, maybe lack of recognition or time-constraints, perhaps a lack of an ability to audible, Keenum (or his line) doesn't adjust anything. That leaves four guys running at three blockers and the obvious result occurs.

Regardless, a well designed and executed rush. Derrick Johnson (#56) doesn't technically rush the passer, only faking quickly like he's going to, but his movement at the snap draws the right guard over,  opening a free lane for Justin Houston to get the sack (split with Houston).

Seattle vs. Arizona. Thursday Night Football. The seventh of the Seahawks' seven sacks on Carson Palmer and the schematics are brilliant.

Seattle comes out in one of their nickel pass rush personnel groupings with four men on the line in response to Arizona's four-wide formation. Prior to the snap, middle linebacker K.J. Wright 'sugars' the A-gap by walking up onto the line of scrimmage, essentially telling the Cardinals' offense that he's going to rush the passer.

This means that the Cardinals have to account for him in pass protection because they can't just hope he drops in coverage. The result is that Arizona tilts their protection to the right side of their line, where Seattle had three potential pass rushers (as opposed to the left side, where there were two).

With an empty set, Palmer's protection options are pretty limited, so when Seattle sends a blitz from the weakside with speedster Malcolm Smith, there's literally no one there to block him.

Wright drops, meaning there's three offensive linemen blocking two Seattle rushers on the right side, while on the left, there's two Cardinals trying to block three Seattle rushers. It's pretty simple math -- even I can do it.

The key to this play, though, is the pass coverage. With an empty backfield set, Palmer's two options in the face of a free rusher in a blitz are to a) hit a hot route receiver for a quick completion in the face of pressure or b) run.

Palmer's not really fast, so his only real option is a) hit a hot route. At the snap, he looks left, to Michael Floyd dragging in the short flanks, but in the corner of his eye, Palmer can see Earl Thomas breaking on the route. It's unclear Thomas would have made the pick if Palmer had thrown it, but the thought of a pick-six floating through his head was enough for Palmer to eat the ball and take the sack.

There you have it. A few examples of well-executed blitzes from several teams in Week 7. In each case, defensive coordinators were able to scheme their way into the manufacture of the true victory: free, untouched rushers at the quarterback.