Muth Read: Is the problem Trent Richardson or the Colts offense?

Running back Trent Richardson has underwhelmed since being acquired by the Indianapolis Colts in September. Ben Muth takes a closer look at what exactly's wrong.

Share All sharing options for: Muth Read: Is the problem Trent Richardson or the Colts offense?

One of the big stories of the first half of the 2013 football season was Trent Richardson. First, it was a blockbuster trade after Week 2, where the Colts gave up next year’s first-round pick for him. Then, with the spotlight focused squarely on him in the weeks after the trade, it was the fact that he can’t seem to get anything going. He’s averaging exactly 3.0 yards an attempt and has yet to break a run for longer than 16 yards. Those stats are pretty grisly to look at, but people who have actually watched the game are quick to point out that there hasn’t been a whole lot of room for Richardson to run through. So, I wanted to sit down and watch some tape so I could decide for myself what exactly is going on in Indianapolis.

Right now, I think the biggest issue Richardson is having is that he has a hard time getting restarted once his feet are stopped in the backfield. I mean, in that sentence alone, you can see how the o-line’s struggles bleed into Richardson’s. The o-line is getting knocked back, so Richardson is having to stop his feet behind the line of scrimmage and redirect (not good for an o-line), and Richardson looks sluggish trying to reaccelerate (not good for an running back picked third overall). It's tough to assign how much blame each deserves in situations like these. Let’s take a look at Richardson’s fourth quarter fumble from last week’s Denver game as an example.

The Colts are running a single back power scheme from the gun. The guy that kills the play is right guard Jeff Linkenbach, who gets rocked into the backfield a yard and a half deep right off the snap. That screws up the puller a bit and forces Richardson to stop his feet 2 yards behind the line of scrimmage. It’s a terrible play by the right guard (which has been a theme in Indy this year no matter who is playing there) but Richardson doesn’t look much better.

Look at how T-Rich just kind of oozes laterally after his momentum is stopped. He’s not exploding outside like a Jamaal Charles and he’s not making a LeSean McCoy-type jump cut, either. He’s just kind of shuffling looking for something outside, when needs to be looking for any kind of seam to get vertically through. 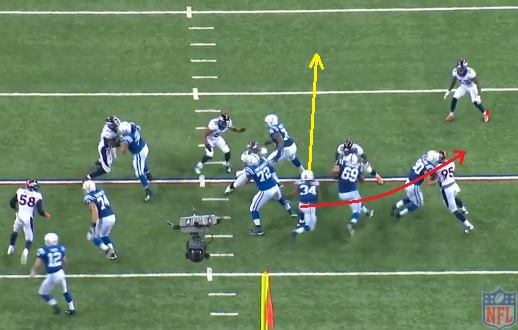 Like that seam, for instance. The hole is actually where it should be despite Linkenbach’s best efforts. If Richardson can come out of his shuffle, stick his foot in the ground, and explode up field, there’s 3-5 yards right where the play is designed. But Richardson can’t seem to get out of his initial stumble in time, and ends up drifting outside, where there just isn’t going to be anything on Power play. Again, Linkenbach killed the play by losing up front, but (and this is going to be a theme) the entire reason you spend a first-round pick on a running back is so he can turn these plays into small positive gains that keep your offense on schedule.

I think the reason Richardson is stopping his feet so much behind the line of scrimmage is that he’s too trusting of his o-line. Because of this trust, he’ll attack his pre-snap landmark trying to set up all his blocks before making his cut. But when his landmark gets shoved into his lap, he has to stop his feet and he’s slow to get to whatever hole might be available to him. And now, not only is he slow to the hole itself, he just doesn’t have any speed or power when he gets there.

Running backs are always taught to press the line of scrimmage on zone plays because it sets up big cutback opportunities. This was something Richardson was great at in college. He’d attack his landmark until the last possible second, setting up all his blocks, and then he’d squirt out the back side for a big gain. The patience was incredible for such a young kid.

When he tries to do the same thing in Indy, he just doesn’t have as much real estate to run into before he makes a decision. I think he gets too deep on his path and has to redirect too violently to avoid the feet of his linemen. There’s a good example of this from the San Diego game.

You see that little gallop step he makes to avoid the heels of his left guard there? It doesn’t look like much, but it takes away just enough of his momentum that he can’t explode over Manti Te'o (who gets rocked into the hole by the fullback) and into the safety. He has to gather his feet before trying to hurdle Te'o’s body and he gets stood up in the hole by the safety. Again, there isn’t a ton of space here, and if Richardson runs perfectly, he probably only gains another two yards. But if he cuts into the hole sooner, he falls forward instead of getting stood up and that’s probably at least two yards.

Let’s contrast that run with a Donald Brown run on a similar play from the same game.

Brown takes the handoff, instantly sees a hole on the backside, and makes a beeline toward the space in the defense. I think is a good example of just taking what the defense gives you (six yards in this case) and not trying to have every run make a coaches clinic cutup. Yes, you want to press the line of scrimmage to set up potential cutbacks, but if there are yards to be had right now, you have to take them.

Another issue Richardson is running into is that I think the Colts' run game is a little too predictable right now. They run a lot of different schemes, but they all end up designed to hit inside the tackle box. As a result, teams are starting to crash down on any space off the edges extremely aggressively to clog up the middle of the field.

In the GIF above, Denver’s defensive end sees the counter develop and attacks the guard pulling to kick him out. That’s as aggressive as you’ll ever see a defensive end attack a pulling lineman, and he’s playing that way because all week his coaches told him to eliminate any space between him and the offensive tackle in order to spill everything outside.

You’ll also notice the outside linebacker’s first instinct is to come inside of the fullback’s block at the edge there. He’s spilling Richardson, too; he’s just able to cross Havili’s face and still make the play afterwards. The Broncos ends were crashing like this all day (it’s the main reason the one reverse the Colts tried went for 30 yards) because they weren’t worried about Indy’s running game beating them to the edge, because the Colts never try to.

In offensive coordinator Pep Hamilton’s defense, the few times they have called outside running plays ended poorly. This is mainly because the Colts skill players do not seem to be skilled blockers. Here’s the one toss I can remember Indianapolis running in the four games that I watched.

They motion Coby Fleener across the formation to seal the defensive end inside and he just doesn’t make the block. This really is indicative of the Colts' skill players’ ability to block. It’s not just Fleener that’s struggled as a run blocker; T.Y. Hilton and Reggie Wayne have also struggled on the outside as blockers. As a result, I think Hamilton has been a little gun shy about calling plays that are designed to go out wide where he needs those guys to hold up right at the point of attack.

Finally, we get to the thing that I think separates average runners from great ones more than any other skill. Can you make a guy miss in the hole? Ideally, there isn’t going to be a defender right in the hole when you hit it, but on the occasions that there is, can you make a move in a limited amount of space to make the defender miss before the hole closes?

This is the first play of the Denver game and it really illustrates a lot of what the Colts have struggled with in regards to their running game. They run a trap and the pulling right guard gets the worst of the trap block. That forces Richardson to shuffle sideways. Then there’s a hole, but there’s a safety in it because a Colts skill player (Hilton) missed his block. I mean, this really is the Colts running game in a single GIF.

Now, I’m not saying this is a bad run by Trent Richardson (he does a nice job of getting something on a crappy trap block), but if he wants to be the elite back he was drafted to be, he needs make that guy miss. And the thing is, he’s done it before.

This is actually a tougher situation. The hole is a little tighter and it’s an linebacker against a defensive back, but Richardson makes a play here. It’s just a little shoulder feint and stepping through a diving tackle, but it gets the job done. I’m not saying he has make this 100 percent of the time, but if you can do it once or twice a game, you’ll start to see that average come up. The problem is that right now, those flashes from Richardson are few and far between.

Now that I’ve watched a lot of what Trent Richardson has done this year, I feel confident saying that his 3.0 yards per carry average is more a product of his environment than of him directly. The Colts just aren’t a very good run blocking team as of right now. But my worry is that he’s a lot closer to being the back his stats say he is, than he is to being a back that’s worthy of a first-round pick. And the play that worried me the most is actually his longest run of the year.

You have to make that safety miss there. There was a huge hole, you’re untouched to the second level, and you have a full head of steam. I mean, there are 100 guys sitting around the waiver wire that can gain 16 yards on plays blocked like that, and they won’t cost a first-round pick. If Richardson truly is more than just a guy, he’s going to need to hit a few of these homeruns when he has the chance.