The NFL trade deadline is Tuesday and several high profile players are linked to moves.

Share All sharing options for: Hakeem Nicks, Josh Gordon & the big names to watch at the 2013 NFL trade deadline

The NFL trade deadline is one of the great teases of the league calendar. Every year there are a spate of names that would be great candidates and rumors follow. Rarely do any deals come to fruition. This season could be different. A series of injuries to skill position players combined with good teams struggling could result in big name players changing teams on Tuesday.

Four deals have been executed already. Trent Richardson was sent from the Cleveland Browns to Indianapolis Colts for a first-round pick. The Carolina Panthers parted ways with veteran linebacker Jon Beason for a late-round pick from the New York Giants. Two offensive tackles also changed teams. Eugene Monroe joined the Ravens from Jacksonville, and Levi Brown was moved to the Steelers after the Arizona Cardinals chose to go in a different direction.

The 2012 season was pegged to have big-name players being traded as NFL owners voted to push back the trade deadline in an effort to give teams more time to evaluate their rosters. It was thought that this move would prompt more teams to deal players, but only wide receiver Mike Thomas and cornerback Aqib Talib found new homes.

Which players are potential trade candidates this time around?

The 2013 season has been unkind to wide receivers, with numerous teams losing their second options. The Atlanta Falcons are limping along without Julio Jones, while the Packers are still dangerous despite being without Randall Cobb -- who's on short-term IR while he recovers.

Carolina doesn't have any injuries at its receiver position, just a lack of weapons. Acquiring Hakeem Nicks would give Cam Newton a player to pair with Steve Smith while the Panthers make a second-half push for a wild card spot after a poor start.

Nicks is in an interesting position, as the veteran receiver is on the last year of his rookie contract in a season where the Giants are struggling. It appears the front office will part ways with him following the season, but New York is said to be resisting offers, according to Adam Schefter. 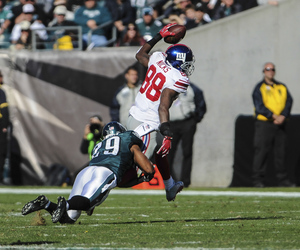 A bad start to the season has opened the door for a trade, but should New York pull the trigger?

General manager Jerry Reese has a tough decision on whether he's prepared to fold on the season. The Giants currently sit at 2-6, but in a weak NFC East, they find themselves just two wins out of first place. This is compounded by a near-injury to Victor Cruz against the Philadelphia Eagles. It wasn't serious, but it gave the team a scare. A deal could depend on whether New York really thinks it can push the struggling Dallas Cowboys at the top of the division. If the answer is yes, then the team has to keep Nicks through the end of the year. If it doesn't believe it's possible, then it's time to move on.

There are only so many ways a player can say it: Tony Gonzalez does not want to be traded. The Atlanta Falcons tight end continues to speak publicly about his desire to stay where he is, saying he will not ask to be dealt but will accept a move if it's in the team's best interests.

Trading Gonzalez would be the right move for Atlanta. He is expected to retire at the end of the season, and there's little hope remaining for the Falcons this year. It would be an opportunity to both recoup something, while allowing him to attempt a playoff push with a contender this season.

Kansas City is the sentimental landing spot for Gonzalez. His return to Arrowhead Stadium would give the surging team another jolt. A sure-handed receiver in the center of the field would benefit Alex Smith greatly, and he would be the final piece needed in the offense.

Joining the New England Patriots wouldn't as be romantic, but it's a move that would make a lot of sense. Tom Brady is starting to find his stride now that Rob Gronkowski is back. However, he still needs more reliable weapons. The offense is accustomed to running two tight ends in its passing game, and Gonzalez would slot in perfectly as the player to work intermediate routes.

The Cleveland Browns haven't hidden their willingness to move anyone for the right price. It's a stunning move considering Gordon is on pace for more than 1,500 receiving yards this year, but the front office is looking to rebuild the organization without many of the players the former regime added.

More: A closer look at the market for Gordon

Despite the off-field issues -- he's one failed test away from a year-long suspension -- it would be foolish for Cleveland to trade its best offensive weapon. Gordon is young, productive and makes his quarterback better. For this reason, it seems unlikely that a team will pony up enough to make a trade.

Green Bay and Carolina find themselves with similar interest to Nicks, but the Detroit Lions could be a fascinating landing spot. It has been reported that the front office isn't interested in players with off-field issues, but adding Gordon would take a fearsome offense and make it one of the best in the league.

The Minnesota Vikings have little chance of salvaging their season following a 1-6 start and being firmly couched at the bottom of the NFC North. Jared Allen is in the last year of his deal, making this a sensible move, but potential landing spots complicate a potential trade. According to Jay Glazer, the Vikings are interested, but it could mean sending Allen to a division rival.

Both Detroit and Chicago are in the hunt for a playoff spot, and each team is struggling to rush the passer. The Lions could use an experienced defensive end, complementing Ndamukong Suh and Nick Fairley in the middle, to push them over the top. The Bears need someone to help mitigate the struggles of Julius Peppers this season.

The Vikings would need to get past the idea of sending Allen to a rival for either trade to work. If it's a one-year rental for a mid-round pick, that might be enough to force the front office's hand.

The talented but troubled Titans receiver is the player with the best chance of having a new team on Wednesday. He found himself on the outside of his team's offense, but he would have value to a team looking to make a playoff push. The possibility for a trade is compounded by a low price, which could prompt the move.

He's more of a complementary weapon on a team with an established group of players. The Packers, Panthers and 49ers all have needs for another receiver without upsetting their starting rotation too much.

Off-field issues could scare these teams away. Still, it's a low-risk move with a potentially high reward.

• NFL Debrief: Waiting for the man

• Longform: Stafford, and the making of a quarterback

• Is the problem Trent Richardson or the Colts' offense?