Theres something so stupid about weeks that end on two Prime Time clunker-games, its like if your giving birth and then instead of a baby you get a entertainment coupon book at the end.

With the usual caveat, this is PARODY. All spelling errors are intentional (we think). -Ed.

NFL weeks should be like screen plays in 3 Acts- Mike Glennon should of led the Bucs to a "w" on Thursday, Jordy Nelson should of died of exhaustion after catching his 5th TD on Sunday, And on Sunday Jordy should have come back in spirit form in the Rams locker room to teach Tavon Austin the true meaning of Halloween since the rookies been a Ghost ever since he got in the league. 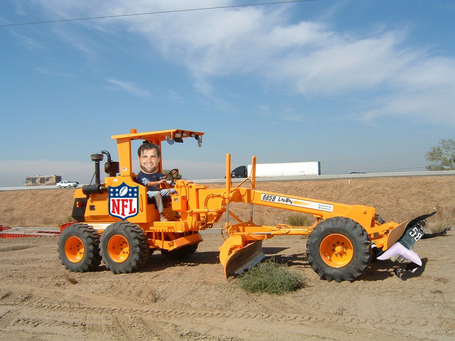 Peyton Hillis- I like to have a little fun with it and say that you've got your all-stat runningbacks then you've got your Allstott RBs- guess which one Pey"dirt" Hillis is folks. Peyton put in a Road-Grading  70 yds on 20 carries for a pitch perfect 3.5 YPC. Thats a bit on the highsides to keep the chains grinding to a old-school 15-7 victory but now Im just nitpicking here. Peytons a freak of modern medicine having survived the Staph infections of both Cleveland and Tampa Bays lockerooms leading some to paint him as the "Outbreak Monkey" of the NFL which is totally unfair given that if Goodell wanted to eliminate a infected expendable NFL community he would of sent a tactical strike to EverBank stadium. Yep, old Peydirts got the immune system of a Morracan Whore but the agressive downhill mentality of Tommy Moe on Winstrol folks and you mix those to together and you get a thinking mans Brandon Jacobs just Road Grading the absolute heck out of the NFC east.

Raiders Defensive Coordinator Jason Tarver- Im always going to take my hat off  if you manage to stop Big Ben from imposing his will on you- you don't have to look much farther then NFL record books and Court dockets in most of the lower 48 United states to show what a tough task that can be. You always want your coaches to be a culture fit for your area so its just perfect that the cameras captured Tarver putting up the double-bird or as most folks from Oakland call it, "foreplay." I like a guy whose not afraid to speak his mind to the replacement-replacement officials who statiscally are missing more calls then Odin Lloyd no offence. 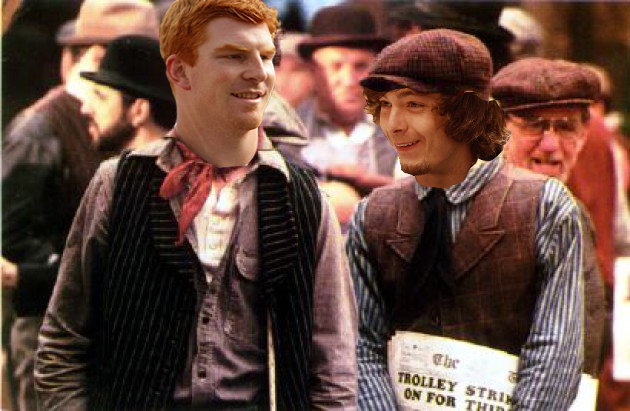 "Extree! Extree! Ole Andys never won no awards before besides "Most likely to be confused for a birthday candle" so this is a big deal for him. Andy threw for 5 TDs I tells ya against a Jets Defence that had moah holes in it then the Hindenberg folks. Extree! Extree! I called this game "the Sunday funnypaypas" account of Ole Red threw it to Green and Blue 'em out of the wahtah. Andy looks like a guy who probly never ate his own lunch til he turned 23 on account've there always being a Geno Atkins type pocketing all his paper route money. Lotsa racists say Ole Red doesnt look like a QB but I tell ya Honest Andy give ya perfect change everytime if ya buy a paper with a dollar folks."

Announcer Of The Week- Jaws

Ron Jaworskis without a doubt the handsomest analyst in Bristol unless you count Stink, Tirico, Hoge, Carter, Ditka, Jackson, Wiley, Polian, Holtz, Bruschi, Millen, Theismann, McShay, Kornheiser, Berman, Young, Dilfer, Scott, Reilly, Gruden, Tafoya, Allen, Edwards, Golic, Johnson, Kiper and Damein Woody. But it was his brains not his beauty that caught my eyes and ears yesterday when he was giving a MNF take:

Not only did Jaws call them a "Road Grader" football team but he added that "they look good coming off the bus" which is something Jaws would sooner say about Kordell Stewart then anyone else.

Of course you dont expect a Road Grader to pretty much lose to the Rams on National TV so technically Jaws was wrong on this one even though he was right. Jaws should no better than to call the Seahawks RoadGraders when they use formations of 10 outside linebackers and Rich Sherman- thats not a Road Grader folks thats a Showroom Grader and Im tossing the keys back to the salesman. In all fairness though John Henry did beat the Road Grader because it started celebrating 40 yds before it was done so may be Jaws is onto something here.

Fans Of The Week- Halloween Cheerleaders 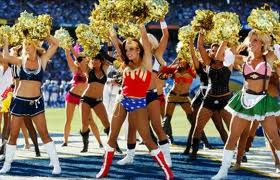 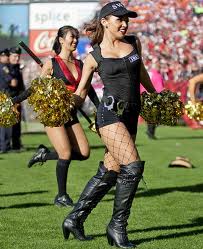 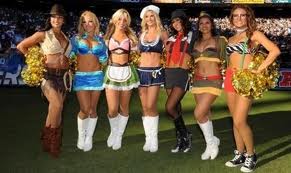 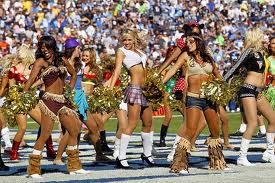 Every year for Halloween I go as the Rooney Rule and dont give any candy to White tricker treaters until they bring a minority kid over to my door to get their York pattys first- or as I call them "Entitle-mints". Its a very educational experience and most've the time the parents seem to be very thankful to have there children learn a lesson about the Real world instead of just getting handouts.

But as Octobers over Im so glad that all that pink stuffs going to be gone from my TV now that were done curing Breast Cancer. Not to sounds insensitive or anything but if the NFL wanted to get girls to be fans you have to take a page from Mike Wallaces playbook and go one of 2 routes:

• The Post-Mortem: Atlanta is truly a town of history

• Trade deadline: Nicks, Gordon and the big names to watch