Last week saw the fall of Freeman. This week could see the rise of a Cassel. Could some high-profile names in New York, Houston, and St. Louis be the next?

Share All sharing options for: Quarterback watch, Week 5: King of the Cassel

Josh Freeman was the first big chip to fall this season. Now that the Bucs are trying to trade Freeman, could he get a new job and also become the second QB this year to get benched? What team would even have him?

The Titans just got some bad news about Jake Locker, right when they took the lead in the AFC South. Is Freeman an upgrade over Ryan Fitzpatrick for the next two months? Would the Texans be willing to add Freeman to show Matt Schaub that they aren't that they just aren't that into him?

If only Raiders general manager Reggie McKenzie didn't appear to know what he was doing.

With Freeman only a rental, it seems like the Bucs could be stuck with him for the rest of the year unless they decide it's better to release him now. An 0-4 start means that there is little hope for the playoffs, so there's no reason to think that they need insurance in case anything happens to Mike Glennon.

We've see quarterbacks benched before, many times. The Freeman situation seems to be a rare case where things went so bad, the QB has been excommunicated.

Here's a list of players that could be next.

Ponder: I'm six years younger, and I led you to the playoffs last season, I'm the guy you designated to be your franchise quarterback. The other guy is coming off of a 2-14 season with the Chiefs. Look how much better the Chiefs are without him!

Cassel: I'm 1-0 for you this year and the other guy is 0-3. I'm experienced. I've led teams to 10-win seasons. I'm still under contract next year on a non-guaranteed deal. It's not too late to turn our season around with the amount of raw talent we have with Adrian Peterson and Jared Allen. Let's not waste it.

Most of what the Vikings did last week against the Steelers in London can be attributed to AD, some nifty playcalling/execution by the coaching staff, Greg Jennings and Jerome Simpson. But they still won with Cassel. Ponder has not played well throughout his NFL career. This should be an easy decision. 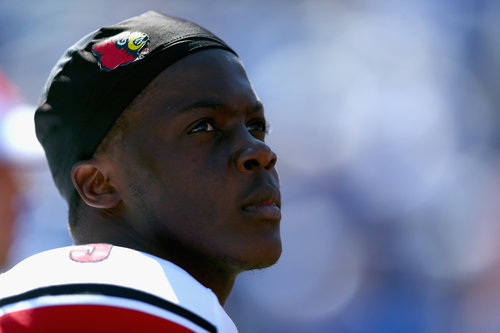 Needing a quarterback? Not to worry, there are 29 college signal callers for the draft next year.

Hoyer: Not only are you 2-0 with me, but I'm also younger than the guy you drafted last year! He's bad. I'm, well, less bad. Why is this even a question?

Weeden: I agree with Brian Hoyer.

Rob Chudzinski has named Hoyer the starter for Thursday, but is still non-committal for the rest of the year. Is he just trying to motivate Hoyer? If the Browns aren't trying to punt their season away, there's no reason to ever start Weeden again.

Up next: Bills on Thursday

Gabbert: Neither one of us are good, but at least I'm still "projectable"?

Henne: I hope that Gus Bradley realizes that the last guy only lasted one season. Right now, we are looking like an 0-16 team. If there's any shred of hope that I give you a better chance to win two games, maybe you should take it, Gus.

Gabbert returned this week to face the Colts and threw three interceptions. He has a grand total of zero touchdowns and five picks through two games. Combined with Henne, the duo has one touchdown and seven interceptions. The biggest screw-up that the Jags could do right now is win enough games to not pick first next year.

This week's going to provide a major test in doing that.

Up next: The Jags travel to face the freefalling Rams in St. Louis.

The heat is on

Rex Ryan has confirmed that benching Smith is "not a thought right now," but that sort of implies that it's on the backburner. Smith, who has 11 turnovers already, is going to feel that burner on his backside if he has another poor game this week.

Up next: Traveling to face the angry Falcons in Atlanta. It might not be the best time for Geno to turn the season back in his favor.

Surprising switches for the future

Unless he has improved dramatically since we last saw him, I don't think that T.J. Yates is the answer over Schaub right now. But Schaub has thrown 16 interceptions in his last 14 games, including the playoffs, and the Texans have fallen short of expectations for as talented as the team is.

Maybe he can look to Joe Flacco as a player that turns it on when the playoffs start, but can Houston even make the playoffs this season? The Texans may have waited too long to start a search for the next quarterback of the future.

You think the Giants defense is terrible? They also have only seven points in their last two games. Eli stays on this list for as long as New York remains winless.

Up next: The Eagles will provide a gift opportunity for Eli this week, but can he take advantage of it?

Speaking of which, the Giants provide the same opportunity for Vick to put up some big numbers. Vegas currently has the over/under on this game set at ∞.

Up next: at Giants

They drafted Landry Jones in the fourth round this year, meaning that they weren't entirely unaware of Roethlisberger's age, but how long does "0-and-something" last before they take a longer look at Landry?

I thought Sam Bradford was supposed to be the future, right? Well, the Rams might have two top-five picks in the draft next year with their own selection and Washington's. Maybe they should have just picked RGIII.

Bradford signed one of the last of the massive rookie contracts, but St. Louis can save over $10 million against the cap in each of the next two years by cutting him. If they finish 4-12 and are looking at Tajh Boyd while still getting to use their other pick on a great defensive prospect, is there any reason to keep Bradford around?

Which also brings up another interesting point, because Bradford could still be highly-successful on a team with more offense around him, so he could eventually also be the guy that pushes one of these other guys off of their own seat next season.

The Raiders are already missing Pryor, dearly. He's back this week.

Up next: The Chargers 29th-ranked pass defense comes to town.

Jake Locker was enjoying the finest run of his career, currently ranked fifth in QBR through four games, but his problems up to this point went beyond accuracy. He also has issues staying healthy and now will miss 4-8 weeks with a hip injury, and there's nothing "hip" about that. Am I correct?

Fitzpatrick won't do anything to steal the job from Locker, but can he at least keep Tennessee afloat for the time being?

Up next: Before the year you would have thought that the Chiefs coming to town was going to be a good thing, but instead, Fitzpatrick could have immediate flashbacks to what it was like in Buffalo.