The Texans have hit a low point in the 2013 season.

The San Francisco 49ers dominated the Houston Texans on Sunday Night Football, coming away with a 34-3 win.

Schaub isn't too thrilled about the record, though: 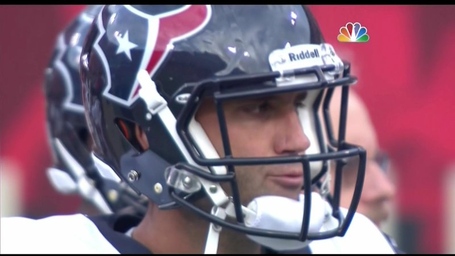 Schaub was eventually replaced after this horrendous throw:

While Schaub was the story of the night, the 49ers played well. Colin Kaepernick only completed six passes all night, but the offense worked efficiently. The defense stole the show, though, dominating the Texans from start to finish.

There weren't a ton of fantasy points scored on Sunday night, unless we're talking about the 49ers' defense. Frank Gore and Vernon Davis both scored touchdowns, though.

No notable injuries were reported in this game.

The 49ers were 4.5-point favorites in the game, according to Odds Shark and covered the spread.

The 49ers have a home game in Week 6 against the Arizona Cardinals, while the Texans also return home to take on the St. Louis Rams.