Fumblr is a fake social media platform that examines the NFL through the eyes of the internet. Get all your memes, GIFs, and depressing fanfic about Week 5 right here. 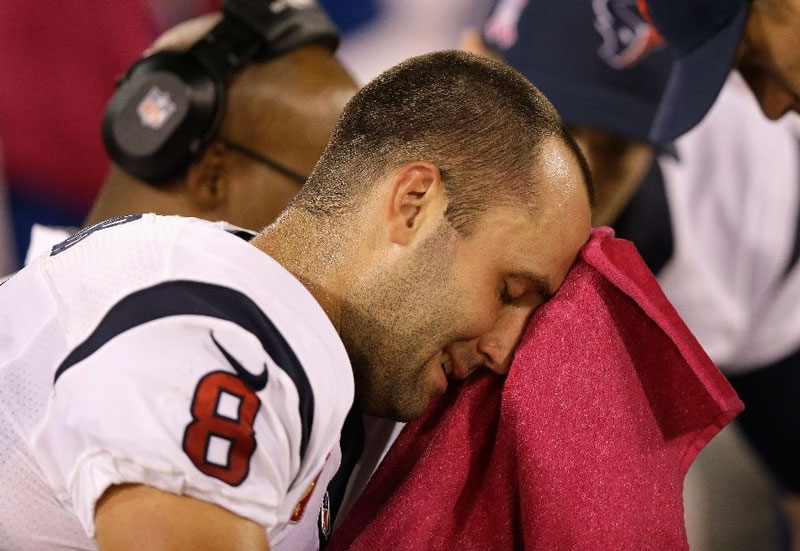 (via The Agony of Defeat)

The door of the Ford Taurus groans, but Matt Schaub can't identify the source of the noise as he opens it: rust or the year-old dent near the fender seem the most likely culprits. He steps into the suffocating heat and squints in the desert sun, a reflex he's grown accustomed to since sitting on his sunglasses six months earlier, at a gas station somewhere in the vast expanse of west Texas after fleeing Houston.

Houston. He turns the word over in his mouth like a piece of gristle, then spits it out in the hard dirt parking lot. Seven years in that humid disaster of half-assed urban planning, and what thanks did he get? This is better, he tells himself. Freedom. No scrutiny. He scratches at his unkempt beard and enters the diner.

The proprietor looks up from a newspaper. "Anywhere you want," he says, gesturing to the empty tables with his chin. Schaub falls into a vinyl seat next to a grimy window. The dirty glass reminds him of the smoke in the windows of the McMansion he used to own. The police couldn't prove arson, they said, and the insurance company cited a small-print loophole in refusing repayment. Houston.

The owner, standing at his table, clears his throat. He has a gray mustache, thinning hair waxed back from the sides of his head, and a name tag that reads GARY. "What'll ya have?"

"It's about all my stomach can handle."

"Coffee can't be good for it."

"We do a lot of things that aren't good for ourselves."

"Ain't that right." He turns to the kitchen.

Schaub again looks out the window, surveying the dried-up mining town: a post office; a general store; train tracks to better places; creosote. What had been here? Silver? Copper? What fools had settled for this dusty gamble instead of pressing another 150 miles to the Pacific coast?

Gary returns with coffee and simple fare. "Y'know, you look familiar," he says, and the color drains from Schaub's face. "You kinda look like--"

"--the guy who got burned in effigy in Houston? Yeah, I get that a lot."

"Who? I was gonna say the Unabomber, whatshisface. Ted Kaczynski."

"Oh," Schaub replies, suddenly aware that the beard he'd grown to become anonymous was perhaps more effective than he liked. Damn my ego. He makes a mental note to buy clippers, or at least borrow some scissors. Money isn't exactly--

Money. Shit. Schaub feels for his wallet and gets nothing but smooth, empty pocket. His memory flashes to the last nameless town he stopped in, some 285 miles south between Needles and Barstow. He sees it with perfect clarity: his wallet is there, left on the counter after a meal like this one in a diner like this one.

"You want anything else?" Gary asks, and Schaub reflexively thinks, Yes, so much more, but in response he merely shakes his head.

"Seven dollars, no rush" says Gary, dropping the check on the table.

"Um, about that," says Schaub, feeling the pressure of a collapsing pocket. "I think I lost my wallet at the last place I stopped..." He trails off when he sees Gary's eyes harden.

"I can't very well be giving free shit to every meth-head who happens through here."

Gary cuts him off: "What you got in that shitheap out front?"

Matt Schaub pauses, and closes his eyes. He remembers Hawaii: the impossible lushness of the terrain, the warm air of Oahu's leeward coast, snorkeling with sea turtles on a reef teeming with rainbow-colored sea life. It is a nice memory, and he savors it.

He hopes that the 2009 Pro Bowl MVP trophy sitting in his trunk is worth seven dollars to Gary. 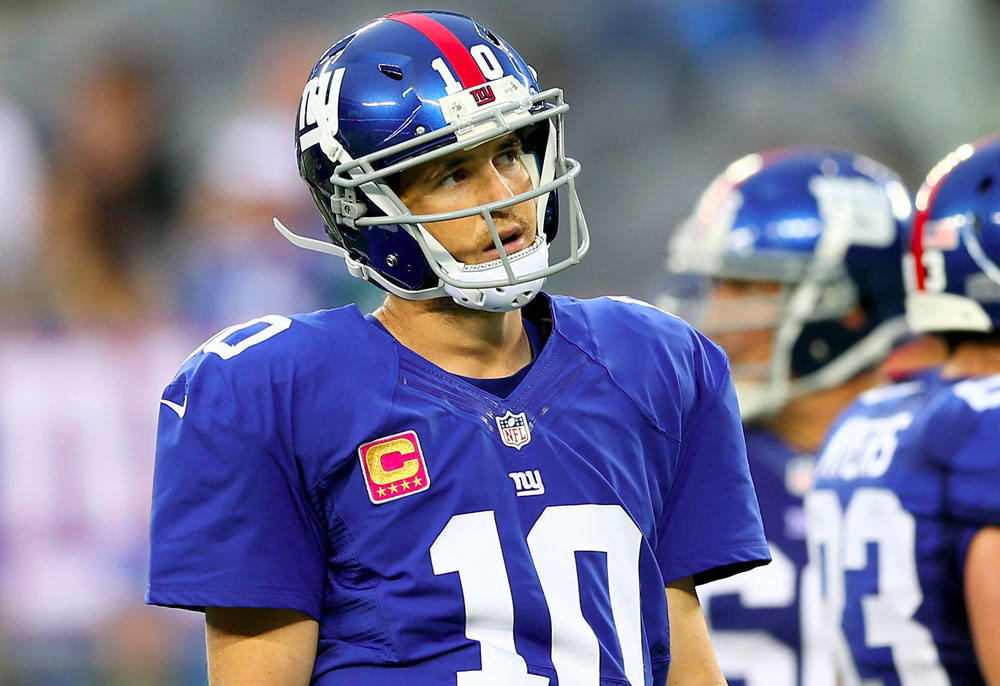 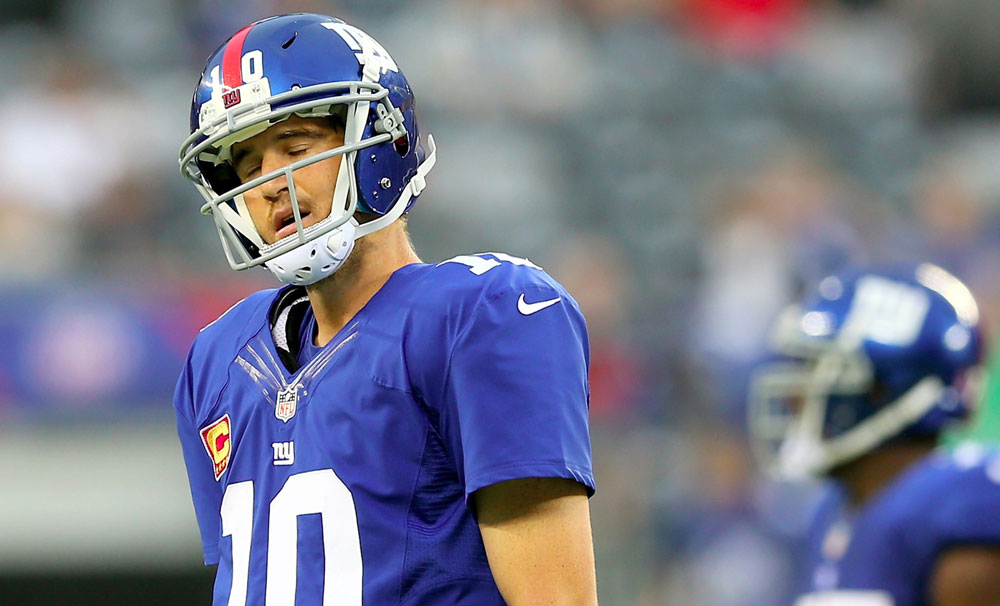 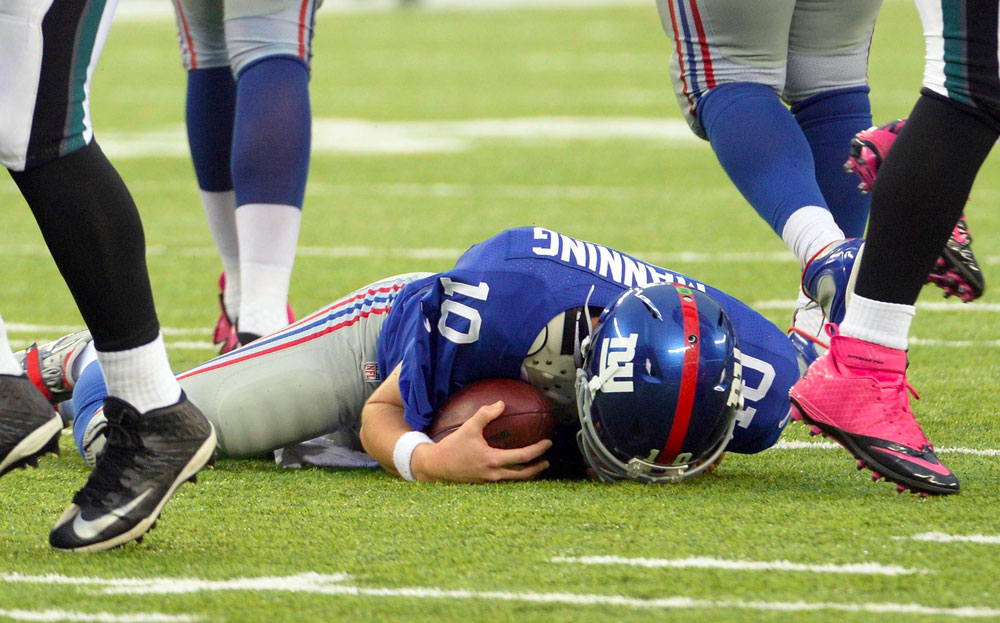 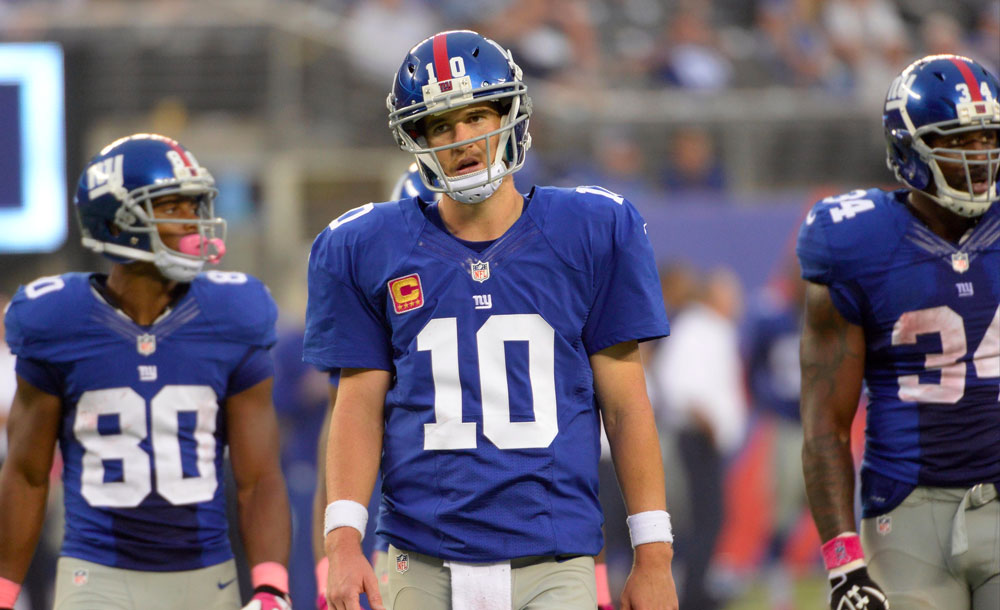 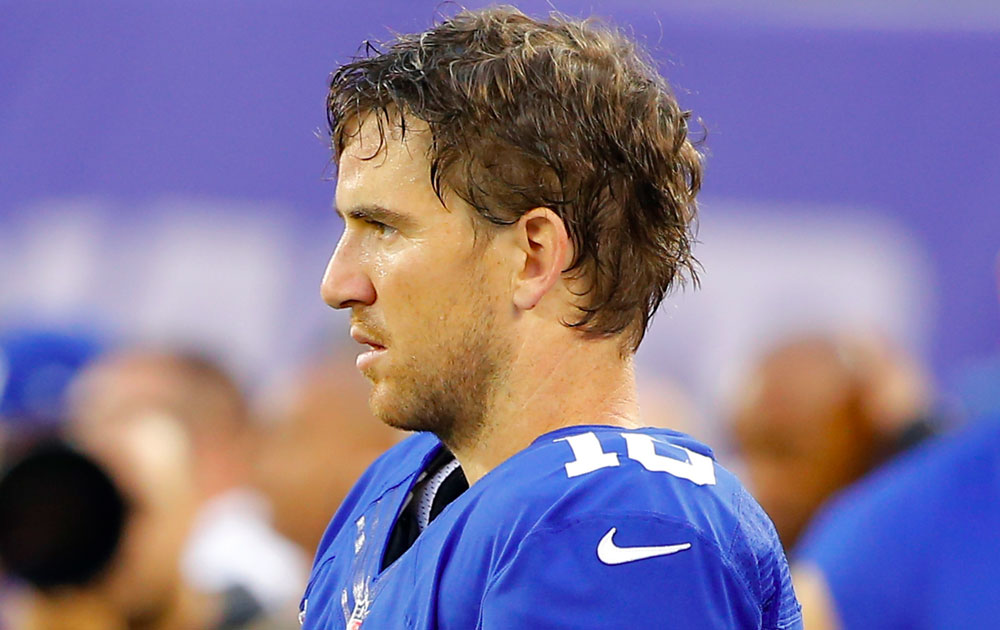 For the second straight week, I heard someone on TV say that Eli Manning playing terribly is the result of him trying too hard because his team isn't good enough. This Sunday it was Kurt Warner on the NFL Network who claimed Manning was trying to do too much, and I nearly threw my laptop at the TV.

Manning threw three interceptions to an Eagles defense that had gotten two interceptions in its first four games. Eli Manning SUUUUUUUCKSSSSSSS, and until the moronic former players who stumble into broadcasting recognize that mediocre players are capable of brief periods of excellence (hello, Joe Flacco), we're going to be stuck with people making apologies for Eli just because he won two Super Bowls. I hate it. Fire everyone.

Right with you, Tom.

These GIFs don't even cover the entirety of Monday Night Football's first-quarter silliness. There was also a sure-thing interception that bounced out of a Jets player's hands and a Roddy White fumble that bounced away from Jets defenders and ended up in Julio Jones's possession for an extra 18 yards. Nobody could hold on to the football. It was great.

Every time a very tall, very fast, very strong wide receiver makes a difficult catch, I see tweets about how that player is a Grown-Ass Man. I'd like Sports Twitter to be a little more unpredictable: don't just say the same thing every time. Show, don't tell:

(*may actually be true)

Before hurting his neck on Sunday, David Wilson scored a five-yard touchdown run and celebrated with two consecutive back flips, which was mistakenly called a double back flip by just about everybody, including this establishment:

A double back flip is a single jump with two flips. Wilson executed two back flips, not a double back flip. I asked the SB Nation writer responsible for the above tweet (who shall remain nameless) why he chose that verbiage, and he said, "Well, I didn't feel like--"

"YOU DIDN'T FEEL LIKE USING THE ACCURATE WORDS?!?!?" I may have interjected.

I mean, seriously. It's like nobody watches gymnastics in the Olympics. 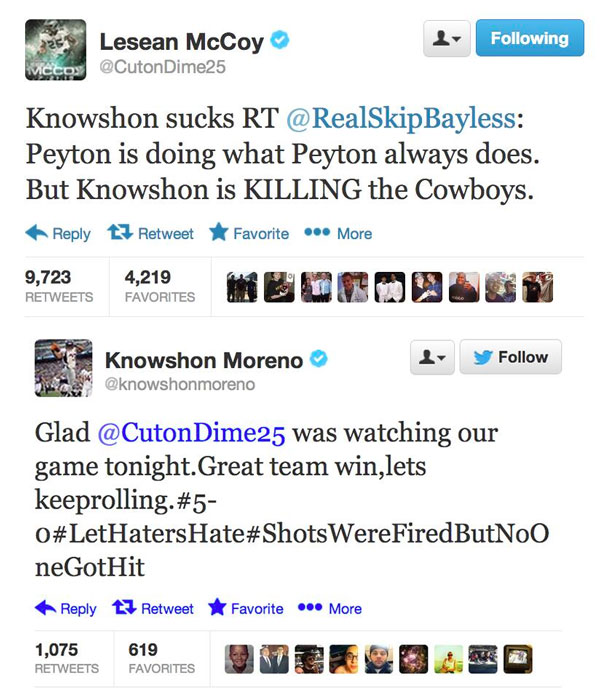 This is hardly worth any words at all, but two things:

HAHAHA!!! Hilarious the way you stole millions of dollars from people buying gas! GOOD ONE, JIMMY!

I'm saving this GIF for the day that son of a bitch goes to prison. 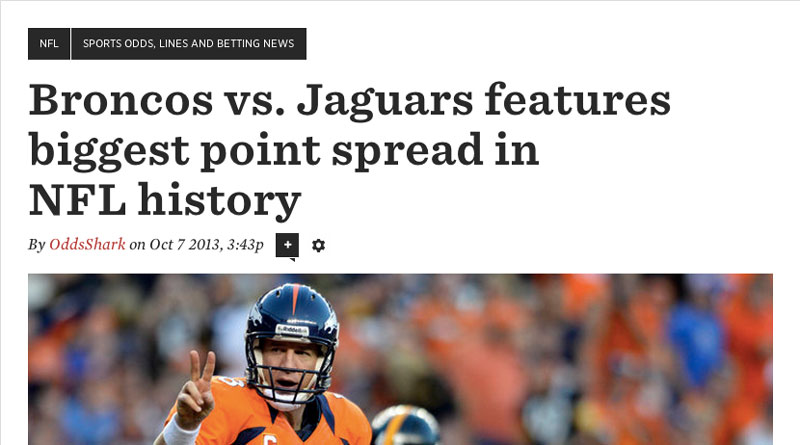 Matt Schaub walked along the desert road, parched and sunburnt. He should have never abandoned the Taurus after it sputtered to a halt; it could have offered him shade and perhaps the attention of emergency vehicles. Another bad decision.

His thirst was unbearable. His bald head cracked and peeled with dead skin. This, Schaub realized, would be his death: exposure and dehydration in an unforgiving environment. He chuckled with gallows humor, and his chapped lips oozed thick blood. He laid down in the road and welcomed his end.

And then, a cloud of dust. A miracle. A Good Samaritan in a pick-up truck came to a halt. The driver exited, pulled Schaub into the cab, and gave him a liter of water. Schaub gulped thirstily. "Go 'head," the driver encouraged, "plenty more where that came from."

Schaub came up for air as his senses returned. "Where are we going?" he croaked.

"Jacksonville, just 3000 miles away" said Tim Tebow, putting the truck into gear. He looked at Schaub. "Have you accepted Jesus Christ as your personal savior?"

• Lessons learned from every Week 5 game

• NFL Debrief: Manning, Romo and a trip through the record book