Tony Romo's legacy summed up in one game

Breaking down Romo vs. Manning in the Shootout at the J.J. Corral

Share All sharing options for: Tony Romo's legacy summed up in one game

After a game like Broncos-Cowboys, it's the easiest thing in the world to let superlative flow into hyperbole as you strive to describe the contest. And to indulge in metaphor, the battle that nearly broke Jerry's video board was a heavyweight fight -- and not the real-world kind, either. This was Balboa-Drago, where haymaker after haymaker was landed as both combatants kept their gloves at their waists on defense.

Of course it's hard to cast the ultimately victorious Peyton Manning in anything resembling an underdog role, but the special aspect of this game wasn't really about him. His numbers -- 414 yards passing, 9.9 yards per attempt and four passing TDs -- were superlative. And not a one of them was even a season high. Despite the eye-popping final score, this one will go down as one of 30 similar footnotes in Manning's nigh-incomparable legacy. 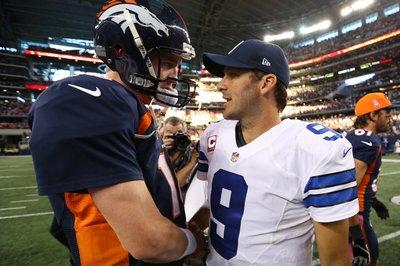 Another week, another batch of records broken for Peyton Manning and the Broncos. However, Manning wasn't the only player making history in Week 5.

No, the special thing we witnessed took place on the other side of the ball. It's something that, by definition, only happens once in any player's career. At age 33, in his 98th career start, viewers were treated to the quintessential Tony Romo game. As any quintessential game must, it encompassed the four vital aspects of Romo's ultimate legacy.

Absolutely nobody does it better than Peyton Manning -- and when he finally hangs up his cleats, it will likely be said that nobody EVER did it better. Manning's run of form in 2013 has been historic, and his embarrassment of the Dallas defense on Sunday was up to his typical strong standard. But a neutral observer checking out the game's statlines -- 33/42, 414 yards, 4 TDs and 1 INT for Manning versus a 25/36, 506 yard, 5 TD and 1 pick performance for Romo -- might have been hard-pressed to ID which one was posted by the all-time great.

A neutral observer watching the actual game could have been similarly flummoxed.

To be fair in terms of what's easily observable, Romo Things are more visible and easily appreciated than Manning Things. Spinning away from defenders, eluding near-inevitable sacks and throwing frozen ropes are the things highlight films are made of. The way that Manning outfoxes defenses with audibles and makes lightning-quick read progressions to find the open man are less visible to the naked eye, and his ability to manipulate safeties can go totally unappreciated without the use of NFL Game Rewind's all-22 film (the editors of which, it must be said, are no great respecters of writing deadlines).

With those caveats in place, let's see what jumps out at us when we look at the 10 best plays of the game for both Romo and Manning.

10) A fourth quarter in-stride seed to TE Jason Witten on a slant for 26 yards.

9) A third quarter back-shoulder throw to Dez Bryant on a spin-out that is becoming the duo's signature TD play.

8) A first quarter comeback dart to Terrence Williams along the right sideline that let Williams loop around defenders and bolt for 25 yards.

7) A note-perfect drop-in to Bryant along the sideline in the third quarter that didn't make the final passing stats but drew a 20-yard PI.

6) Romo spins away from pressure and finds Witten across the field for a first down on 2nd and 16.

5) Romo slides in the pocket and throws a back-shoulder bullet to Bryant on a drag route for Dallas' first TD.

4) In the fourth quarter, Romo again evades pressure, scans to his third read and drops it in the basket for Bryant on the left sideline for a 79-yard jaunt.

3) A patented triple-escape at the end of the second quarter bought Romo time to find Terrence Williams along the sideline -- Williams managed to stay in bounds and scuttle any chance of ending the drive with a TD.

2) A Romo rainbow on a post finds a pot of gold as it's dropped perfectly into the hands of a streaking Williams for an 82-yard touchdown.

1) Romo reaches back to his younger days and pulls an insane triple-Houdini escape out of the hat, rolls the wrong way and fires across his body to Witten for a first down.

9) A strong throw to TE Julius Thomas that fell incomplete, but drew a PI flag on Dallas' Sean Lee

4) A dart to Welker for third quarter TD after Welker baffled coverage with a spinning Z-in move. Three, or maybe four, teams get the kind of consistent time in the pocket to run a play like that that on the goal line

2) A perfectly-placed back-shoulder toss that let Demaryius Thomas high-point the ball and beat sideline coverage for a 26 yard gain.

1) A gorgeous first-quarter strike down the left sideline to Eric Decker that went for 57, burning Mo Claiborne despite the latter's defensive hold and dropping in before J.J. Wilcox could make it over from centerfield

Both QBs made just about every throw in the book, but when the level of duress is factored in it's impossible to say that Manning outperformed Romo in any visible way. Naturally, differential duress was a factor, because...

While both quarterbacks delivered superlative shows, only one received front-rank successful play performance from his offensive backfield. The idea behind the successful play metric is evaluating each play based on whether it gained the required yardage to be considered "successful" based on situational down and distance. The generally accepted standard is gaining over 40 percent of the yards needed for a conversion on first down, 60 percent of the yardage needed on second down, and obviously whatever is required for a successful conversion on third down.

Romo's backfield mate, DeMarco Murray, contributed successful plays on seven out of his 13 touches in the game. 53 percent is a solid Success rate against one of the league's better run defenses, but it amounted to pebbles skittering downslope in Sunday's offensive avalanche. What's more, Murray's successes were all early -- in the fourth quarter, his only contribution was a lame leg-tug in blitz pickup that resulted in a holding penalty.

That effort stood in sharp, sharp contrast to the efforts of Denver's backs. Knowshon Moreno, Ronnie Hillman and Montee Ball combined for 24 Successful Plays on 36 touches, with Moreno contributing 17 of those plays while absolutely tormenting Dallas. Peyton Manning was basically able to spam the Staples' Easy Button two dozen times in this one -- and while some of those plays came on passes, most of the throws were ones that Cooper Manning could have pulled off.

Only tent revivalists and intraveneous drug users can fully identify with the warm, life-affirming glow that suffuses Jason Garrett when he abandons the run. It's tough to hammer Garrett too hard for it in this one, as Romo was putting on a master class and Dallas just wasn't going to keep pace any other way. But don't forget the extent to which Romo was carrying the load alone.

And his defense made sure it was one heck of a load. Neither D approached acceptability in this one, but the Cowboys never gave Romo a bit of breathing room. Of course, on an opponent-adjusted basis this probably wasn't their worst effort of the season. With the year Eli Manning is putting together the Cowboys' Week One effort is going to look absolutely dreadful in hindsight, and getting ripped up and down by a soon-to-be 7-9 Chargers squad that handed three INTs to the Raiders isn't pretty, either. But while their effort might qualify as "somewhat game," their results kept Romo's back against the wall.

It goes without saying for any frequent Cowboys observer that special teams were a net negative for Dallas in this one, as they have been in about 75 percent of games since Joe Avezzano left the sidelines. It wasn't as dreadful a third-phase defeat as Dallas typically endures, but a bad hold and a bone-headed bring-out decision started two Dallas drives inside their own 20 while they surrendered a 40-yard return to Trindon Holliday on the other side. When you're coming at the King, you best not miss -- and predictably, Dallas' special teams did.

Finally, the pass protection wasn't much of a contest. Manning had to slide his feet six or seven times in the pocket, and his lone sack turned into a win as Dallas predictably yanked his facemask for a 15-yard personal foul. Romo endured four sacks while reaching back to his 20s to whirl away from pressure on several others ... and succumbing to it for one fateful moment.

Aspect 3 - There shall be one big mistake

If you've got a working TV set, laptop or smartphone, you've seen Romo's INT a half dozen times by now. On the previous snap, Romo pulled the ball down and was sacked, putting Dallas in a second and 16. On the fatal play, Denver dropped eight men into coverage and got near-immediate pressure as the Broncos' Mitch Unrein -- who, inexplicably, has yet to draw many John Randle comparisons in his career -- whipped first-round center Travis Frederick with a swim move and got into Romo's lap. Rather than eat the ball again for a 3rd and 20, followed by a punt and a Broncos victory what would have been as inevitable as the heat death of the Universe, Romo threw off his back foot and got picked by the Broncos' Danny Trevethan.

Of course, this play was unforgivable because of its timing -- it was Dallas' last chance to take the lead, and throwing the INT set Denver up with a drive-thru "would you like a field goal or a touchdown with that?" choice that they drove inside the one before a game-icing field goal. Manning's third-quarter INT where he underthrew Eric Decker by four yards with no significant pressure was forgivable because Denver won.

Aspect 4 - A one-play judgement shall be decreed

If the above seems like an unseemly marshalling of facts in order to mount an overall defense of Romo, please don't take it that way. If nothing else, it is vital to understand that Romo's countless on-target passes, great escapes and hilarious lack of backfield and defensive support while battling one of the game's all-time greats were rendered totally meaningless thanks to that final interception.

Only in viewing his performace through the narrowest, most blinkered and football-ignorant lens can we maintain the "Romo is a choker" narrative. And without that narrative getting spewed, this simply could not be the quintessential Tony Romo game.