We're changing the media narrative, people. Within six months, we'll have people saying Brady doesn't even belong in the Hall of Very Good.

By the time you read this week's Post-Mortem, Matt Flynn may have been signed and cut by up to four different teams. What makes Flynn's travels so confusing is that we know almost nothing about him - 16 quarterbacks already have as many pass attempts this season as Flynn has in his entire career. How can Flynn be so good that front offices keep moving to get him but so bad that he barely sees the field? Maybe he has some sort of horrifying personal habit, like eating salad out of a bag tied to his head like a horse. 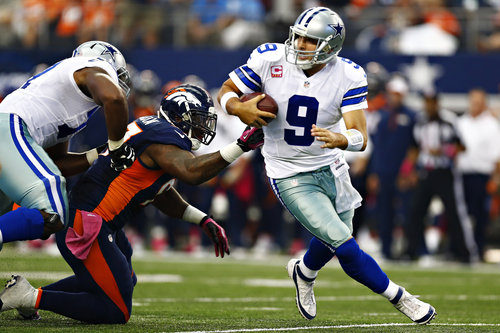 Tony Romo's record day against the Broncos had everything you've come to expect from the Dallas quarterback.

Time of Death: Down by 13, Chicago faced 3rd and 2 at the New Orleans 25 with about nine minutes left. Two incompletions later, the Saints had the ball back and the Bears were headed for their second straight eight point loss.

Cause of Death: On their first five drives, first down did Chicago more harm than good; the seven first down plays the Bears ran resulted in a total of -7 yards and a turnover. Unsurprisingly, all five of those drives ended with the Bears giving the ball without even crossing their own 40 yard line. Giving the Saints less work to do on second and third down only results in scary things, like "rumors that Rob Ryan will be named head coach of the Giants."

Time of Death: Tom Brady's interception 27 yards away from tying the game sealed two things: the win for the Bengals, and his legacy as The Chokiest Choker in Chokeland.

Cause of Death: In his career, Brady has thrown almost 1,400 fourth quarter passes. He's completed 61.9 percent of them for nearly 10,000 yards, and he's averaged 2.3 touchdowns for every fourth quarter interception. It is, therefore, something of a departure from form for Brady to put up this stat line in the final fifteen minutes:

YEESH. Tony Romo would be getting burned in the streets of Dallas if he put up those numbers. Not in effigy - actually set on fire.

Time of Death: Needing a counterpunch after James Jones's 83 yard touchdown, the Lions drove to Green Bay's 34 yard line but stalled, as Matt Stafford took a sack on third and 9, forcing Detroit to punt.

Cause of Death: Since the start of the 2010 season, the Packers have only rushed for 150 yards in four games. This was the fifth, and it was largely thanks to Eddie Lacy, who ran for at least three yards on each of his first 11 carries. That kept Green Bay out of unmanageable third down situations and sustained some very long drives, and it was a big reason why Detroit's best starting field position all day was its own 21 yard line.

Time of Death: With 2:40 left and the Chiefs leading by 6, Ryan Fitzpatrick threw a pick Quntin Demps ran back to the Tennessee 33, allowing Kansas City to kick a field goal and put the game out of reach.

Cause of Death: The Asphyxiation Machine that is the Kansas City defense has now held its first five opponents under 18 points, something only 15 other teams have done since 2000. Chiefs fans might want to hold off on booking hotels in East Rutherford, however: of those 15 teams, 12 made the playoffs, but only four advanced to the Super Bowl, and none of them won it.

Time of Death: Up by five points, Seattle recovered a fumble on the Colts 30 early in the second half. A touchdown could have shut the door on Indianapolis, but the Seahawks only gained seven yards and had to settle for a field goal.

Cause of Death: Prior to that field goal, Seattle had made Reggie Wayne a non-factor, limiting him to 1 catch for 4 yards on 4 targets. That quickly changed as Wayne hauled in 6 catches on his next 6 targets for 61 yards and a two point conversion. He's now four receptions away from becoming the ninth player in NFL history to catch 1,000 passes, which gets you a firm handshake and a continental breakfast with Roger Goodell. (No seconds.)

you're not sure if you want them to get better or just slip away peacefully.

Cause of Death: The Jaguars went 3/12 on third down attempts, and their only conversions came when they faced 3rd and 5, 3rd and 3, and 3rd and 3. That's become a chronic issue for Jacksonville; they're currently worst in the league when faced with 3rd and 6 or longer, converting only 12.8% of the time while taking a sack on 19.1% of these attempts. We've reached the point where the Jaguars are like a really sick, really old relative - you're not sure if you want them to get better or just slip away peacefully.

Time of Death: On the final Miami snap, Caleb Sturgis missed a 57 yard field goal attempt that would have tied the game. Please don't tell T.D.

Cause of Death: The Dolphins became the first Baltimore opponent since 2006 to be held under 25 rushing yards. This may be because the Dolphins elected to call one run play in the entirety of the second half, an interesting strategy that garnered Miami offense a whopping three points in the last two quarters.

Time of Death: Facing an eight point deficit midway through the fourth quarter, Eli Manning (who's going to win the family Easter Egg hunt this Spring, I promise you that) threw his second interception of the game, because it's been that kind of year for Eli Manning.

Cause of Death: The Giants turned the ball over four times total, which the Eagles turned into seventeen points. Now it's time for a Very Sad Venn Diagram!

First, let's look at the five teams since 1981 that have turned the ball over at least 20 times in their first five games:

Now, let's look at the four teams in that same time span with at least three turnovers in each of their first five games:

Combine the two, and you get only one team in the middle. Observe! 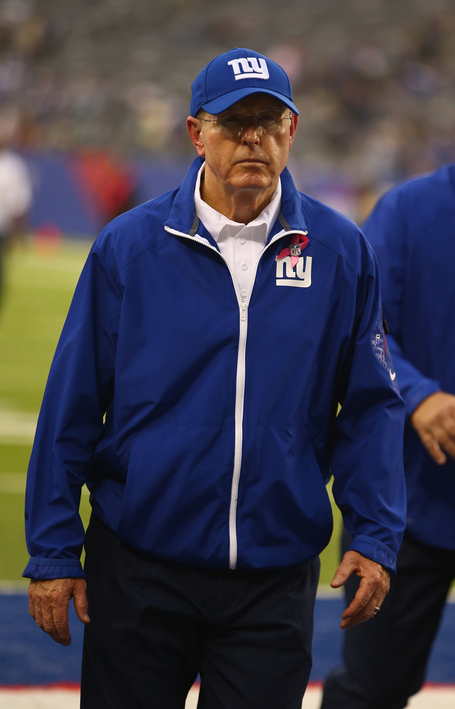 Time of Death: Needing two scores and down to 2:30 in the fourth quarter, Cam Newton was sacked and fumbled at the Arizona 40.

Cause of Death: The good news is that, unlike 4 of the other 6 sacks on Newton, that one didn't come on third down. The bad news is that letting your quarterback get sacked seven times is not actually good news in any way. Sorry.

Cause of Death: Since the start of the 2005 season, 123 teams have scored 45 points in a non-overtime game. 121 of them have won said non-overtime game. This game pushed the numbers to 125 and 122, respectively, and the best explanation we have for the Cowboys is that it sucks to not be in that 122.

Time of Death: On the third play of the game, Tramaine Brock intercepted a Matt Schaub pass, ran it back 18 yards for a touchdown, and started a long, bizarre chain of events that ends with the Texans sending Kurt Warner a flatbed truck full of roses.

Cause of Death: The, uh, obvious answer is already sort of taken, but let's also point out that Houston's special teams play was pretty terrible in this game. Randy Bullock missed his fifth field goal of the year, and on four occasions a Texans kick returner failed to get to the 20 yard line. See, it's NOT only Matt Schaub who stinks.

That doesn't make you feel better as a Houston fan?

Cause of Death: Charles Woodson's fumble return score put the Raiders up by three touchdowns for the first time in 21 games. More significantly, that's the first time the Raiders have held a 21 point lead over the Chargers since 1999. San Diego's quarterback in that game? Jim Harbaugh, and now you're having terrifying future-visions of Head Coach Philip Rivers screaming like a banshee at the 2027 Minnesota Vikings.

Time of Death: Nick Folk's 43 yard game-winning field goal dashed what was shaping up to be a thrilling comeback win for the Falcons.

Cause of Death: Geno Smith became the first Jets quarterback to complete at least 80% of his passes in a game with a minimum of 20 attempts since Chad Pennington's last appearance for New York. That's good for Smith, though unlikely to be sustainable. The troubling pattern for Atlanta, however, is fourth quarter defense, or the lack thereof. Excluding kneel downs, the Falcons have defended 11 fourth quarter drives. On only three of those drives as the opposing offense failed to score any points. That ratio better improve quickly if Atlanta hopes to keep its string of playoff appearances alive.