On Tuesday, the NFL released the uniforms that will be worn in the 2014 Pro Bowl.

The NFL has a brand new format for the Pro Bowl that they'll tryout for the first time in 2014 and it'll happen with brand new uniforms that were revealed on Tuesday morning. The league announced the release of the "NFL Nike Elite 51 Pro Bowl Uniforms" in a press release that will be worn in the 2014 Pro Bowl in January. 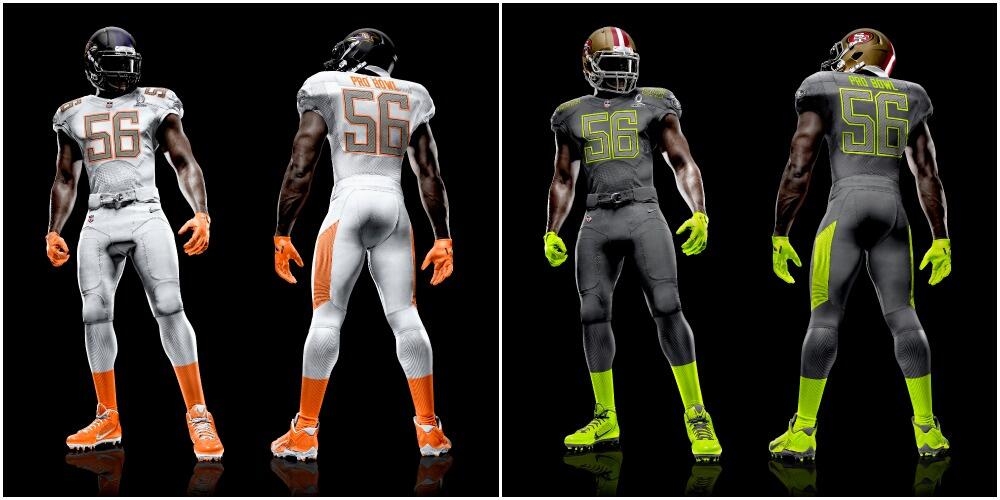 Oregon vs. Oregon State anybody? While the pictures released by the NFL have a Baltimore Ravens player wearing the white and orange uniforms, with a San Francisco 49ers player wearing gray and neon green, the rosters at the Pro Bowl won't necessarily be split by conference.

A player draft conducted by team captains is just one of the changes the NFL has in store for the 2014 Pro Bowl and will determine which player is wearing which uniform. Other changes include the removal of kickoffs and a shortened play clock.

The Pro Bowl is scheduled for Sunday, Jan. 26, in Aloha, Hawaii, one week before Super Bowl XLVIII, and will be televised on NBC.

• Lessons learned from every Week 5 game

• NFL Debrief: Manning, Romo and a trip through the record book